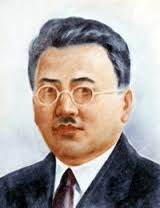 In the article the author mentioned the subject of genesis of economic thought of Ryskulov and, in particular, his vision of transformation of economic structures of the Kazakh society.

In the article the author mentioned the subject of genesis of economic thought of Ryskulov and, in particular, his vision of transformation of economic structures of the Kazakh society in order to understand, why he supported the collectivization and sedentarization of Kazakhs which is carried out by the Soviet power. Four important points is considered: famine of 1918–1919; the V Conference of CPT in January, 1920; the Turkestani congresses in the second half of 1923 and preparation of campaigns of collectivization and subsidence in the 1930th.

According to the author Ryskulov didn’t perceive subsidence and collectivization as policy of centralization, and rather on the contrary considered them as chance for timely modernization and strengthening of national economy. Also as in the 1918th and in the 1919th, he tried to put Kazakhstan on a way of economic development and to allocate it in real political weight. For this purpose, it should prove both elements specified above: legitimacy of the proletarian status of nomads according to the ideological line and budget allocation for them. Ryskulov entered into the Soviet administrative machinery and followed its laws. If in the 1918th Ryskulov’s activity allowed Kazakhs to gain the rights and recognition, stated the author, his same position became the reason of support of the policy which has provoked a severe famine of 1931–1933.

scholar of the Higher School

Use of materials for publication, commercial use, or distribution requires written or oral permission from the Board of Editors or the author. Hyperlink to Qazaqstan tarihy portal is necessary. All rights reserved by the Law RK “On author’s rights and related rights”. To request authorization email to mail@e-history.kz or call to (7172) 79 82 06 (ext.111)
Қазақша Русский English
MOST READ
Month Year
Recorded history of Kazakhstan. Part 2
Heroic mothers of the great steppe
How had the World War II been started?
Philosophy of the Emblem
14 monuments at Tekturmas
The rural akims: the country's hope is in the elections
Kazakh historical drama Tomiris premiered in Istanbul
Stolypin about the worries and hopes of immigrants to the Kazakh steppes
ALASH IDEA IS THE PROTECTION OF KAZAKH STATEHOOD
A tireless explorer of the Kazakh land
SWITCHING TO THE LATIN ALPHABET – UNITE ALL KAZAKH PEOPLE
Kunaev Dinmukhamed Akhmedovich
People who eat horses will kill you
Materials on theme
Population of Kazakhstan guring famine of 1932-1933 - survival as social conflict.
Kazakh and Kyrgyz intelligentsia against of Bolshevization of the country
Speech of the leading research fellow of French National Center for Scientific Research Dr. Isabelle Ohayon
About the international project "Famine in the USSR: 1929-1934"