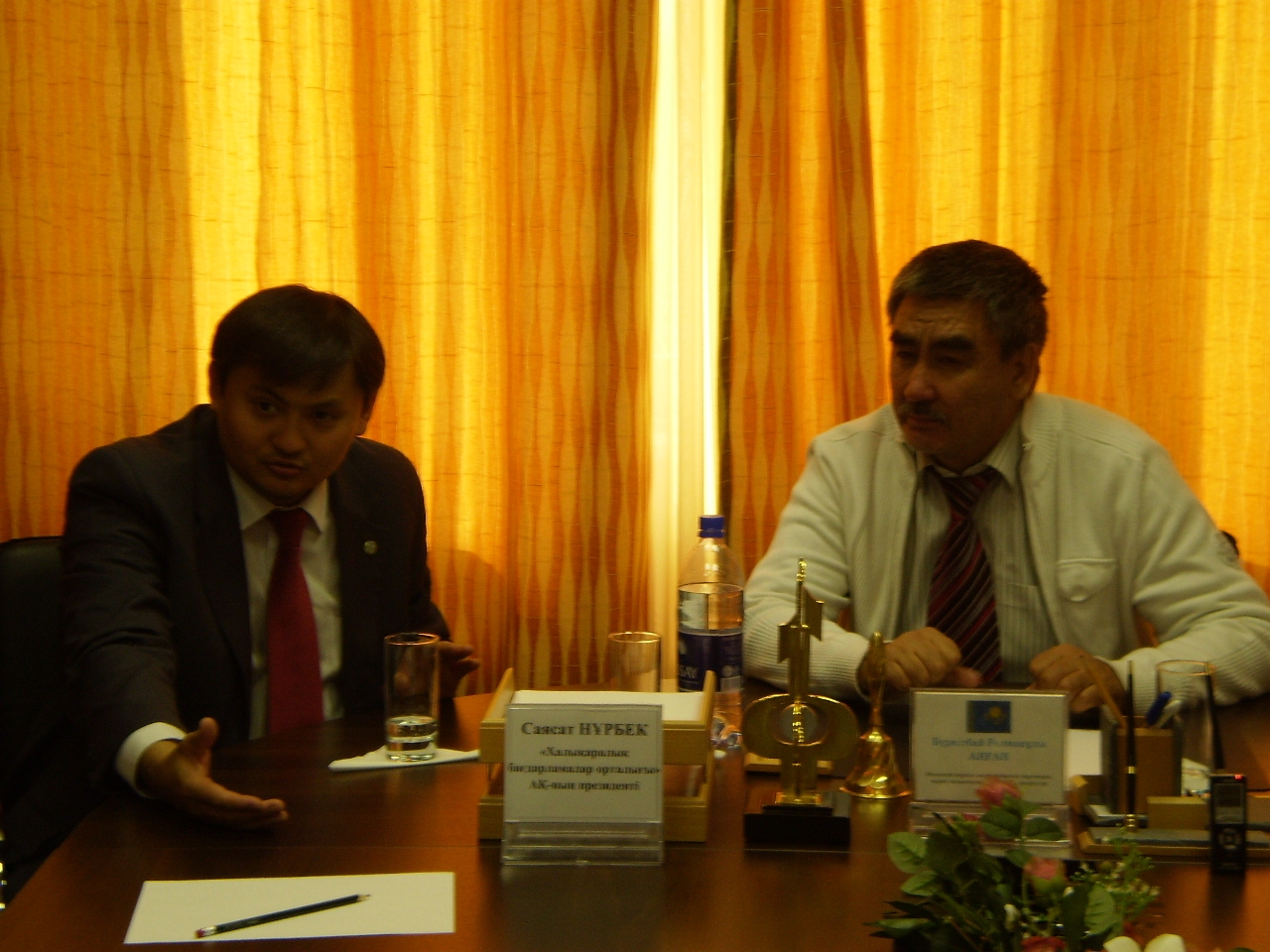 The Institute of History of State of the Science Committee of the Ministry of Education and Science of the Republic of Kazakhstan and JSC «Center of International Programs» signed the Agreement on scientific cooperation.

The signing of the agreement was preceded by a meeting between scientific fellows of the Institute of History of State of the Science Committee of the Ministry of Education and Science of the Republic of Kazakhstan and Sayasat Nurbek, the President of the JSC «Center of International Programs» (Bolashak Intеrnational Scholarship of the President of the Republic of Kazakhstan)

During the meeting S. Nurbek gave detailed description of joint stock company «Center for International Programs», which was created by the Resolution of the Government of the Republic of Kazakhstan № 301 dated April 4, 2005 to implement the initiative of the Head of State on increasing the number of international scholarship Bolashak students

Since 2008 quotas for civil servants, workers in scientific and pedagogical spheres as well as for rural youth were introduced. And the fact that employees of the scientific sphere, the internships for scientific and pedagogical specialists, who have more than three years of work experience in governmental or scientific and educational institutions gained an opportunity to pass international internship has a particularly importance. The selection of applicants began be carried out on the basis of program-target method. The format of the program also has turned from the academic to the target preparation.

Despite the fact that scientists have a great possibility to conduct their researches outside the Republic of Kazakhstan, there is a tendency to decreasing of the number of scholarships awarded to scientific-pedagogical staff on the basis of quota, for example, in 2009 there were 19 scholarships while in 2010 only 6 and no one in 2011. According to the head of the Center of International Programs, the percentage of representatives of the scientific and pedagogical community who participate in the contest of is low enough which is caused by number of reasons, including imperfection of the legal framework, lack of knowledge of foreign languages among contenders.

Sayasat Nurbek, inviting scientists and research fellows of the Institute to participate in this contest expressed his hope that the absence of age requirements, reduction in the required level of foreign language, will contribute to the increased interest of scientific and pedagogical staff to the possible international scientific internships.

Use of materials for publication, commercial use, or distribution requires written or oral permission from the Board of Editors or the author. Hyperlink to Qazaqstan tarihy portal is necessary. All rights reserved by the Law RK “On author’s rights and related rights”. To request authorization email to mail@e-history.kz or call to (7172) 79 82 06 (ext.111)
Қазақша Русский English
MOST READ
Month Year
Burial mounds of the southwestern part of the Semirechye region
Union of the Archives and Library
The referendum on the Constitution is a significant stage of democratization
Heroic mothers of the great steppe
Philosophy of the Emblem
14 monuments at Tekturmas
The rural akims: the country's hope is in the elections
Kazakh historical drama Tomiris premiered in Istanbul
Stolypin about the worries and hopes of immigrants to the Kazakh steppes
ALASH IDEA IS THE PROTECTION OF KAZAKH STATEHOOD
A tireless explorer of the Kazakh land
SWITCHING TO THE LATIN ALPHABET – UNITE ALL KAZAKH PEOPLE
Kunaev Dinmukhamed Akhmedovich
People who eat horses will kill you
Kazakhstan's participation in the Winter Olympics has a long history
Materials on theme
On the preparation of the international project "Famine in the USSR: 1929 - 1934 years"
About Russian and Kazakh … Cossacks
About the international project "Famine in the USSR: 1929-1934"
A new development in study holodomor in Ukraine