About Russian and Kazakh … Cossacks 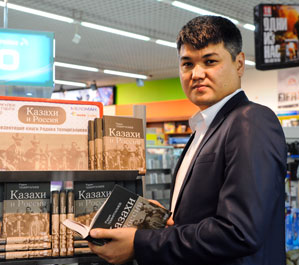 Radik Temirgaliev is a young scientist-historian, publicist (born in 1978), Deputy Director of the Institute of History of State of the SC of the MES of the RK, board member of the Scientific Educational Foundation «Aspandau». He is the author of several dozens of publicistic and popular scientific articles on the history of Kazakhs, as well as the books «White Horde. History of the Kazakh Khanate» («Ак-Орда. История Казахского ханства»), «The Age of the last warriors (1680–1780)» («Эпоха последних батыров (1680–1780)»). Burkitbay Ayagan, Director of the Institute of History of State, member of the National Council of the Republic of Kazakhstan, Kanat Nurov, President of the SEF «Aspandau», as well as famous scientists, statesmen and public figures, students of History also attended the presentation.

The book and its author were introduced by Burkitbay Ayagan. «In modern history there is no state censorship except self-censorship», — the head of the Institution said, noting the advantages of the new scientific work, including tact in covering relations between the two neighboring countries.

He also marked that History is a science prone to ideological pressure: Soviet history was strikingly far from the science of the period of Karamzin, Soloviev and Kostomarov, while the present even more different from the previous. All times had juggling facts and emotional assessments does not reveal the truth, even at the present time. And nowadays in books of some Kazakhstan authors we can encounter a flood of accusations against both Tsarist and Soviet Russia’s full responsibility for annexation of the best Kazakh lands, genocide and ethnocide against Kazakhs. From their side, Russian quasi-historians consider their country to be a power of the messianic idea to save all «dark» and «foolish nations» unable to survive independently in this complex world. The mere statements that the Soviet government gave written language to all minorities, including Armenians and Greeks mean so much.

— Most of that facts, even proved such, «historians» either ignore or interpret them turning inside out. It is impossible to prohibit their activity as we live in different time, there is a rule of democracy now, and alternatives should co-exist at least for the dialectical development of science — said B. Ayagan.

He is convinced that such a divisive, sectarian approach is totally unacceptable in any science, and it can be overcome only by substantiated, irrefutable evidence. Lev Gumilev served as the example in this regard.

Radik Temirgaliev seeks rare facts, for instance in the history of Cossacks. In fact, the basis of Cossack Union «Alash» (Kazakhs) and Russian Cossack freebooters is formed by the ancient Turkic-Mongolian Institute of Cossacks. Many nomads went out from their clans and join international Cossack Cauchy to get the spoils of war and were combined in state institutions. Thus, Kasimov Cossacks (Kassimov city on the territory of modern Ryazan region) appeared. Over time, Russian, Ukrainian and Turkish Cossacks disintegrated under the influence of politicians and fought with each other. At the same time, all they remembered about their own origin; reread «The Quiet Don» and pay attention on the fact that all the Cossacks took snack witf «baursaks with kaymak».

Any way it is not necessary to focus on the prevalence of Turkic or Slavic role in the history of the Cossacks, because Radik Temirgaliev’s book «The Kazakhs and Russia» does not give any assessment of «good» or «bad» figures in the Kazakh-Russian relations. The truth must be seen just as it is, whether it is bitter or sweet. As Pushkin wrote, «I do not wash off sad lines».

Use of materials for publication, commercial use, or distribution requires written or oral permission from the Board of Editors or the author. Hyperlink to Qazaqstan tarihy portal is necessary. All rights reserved by the Law RK “On author’s rights and related rights”. To request authorization email to mail@e-history.kz or call to (7172) 79 82 06 (ext.111)
Қазақша Русский English
MOST READ
Month Year
A role of Buddhism in formation of Central Asian mythologies
From the story of a blood feud
Kazakh historical drama Tomiris premiered in Istanbul
ALASH IDEA IS THE PROTECTION OF KAZAKH STATEHOOD
Stolypin about the worries and hopes of immigrants to the Kazakh steppes
A tireless explorer of the Kazakh land
SWITCHING TO THE LATIN ALPHABET – UNITE ALL KAZAKH PEOPLE
Kunaev Dinmukhamed Akhmedovich
People who eat horses will kill you
Kazakhstan's participation in the Winter Olympics has a long history
Rebooting a field of science and education
Recorded history of Kazakhstan. Part 1
Historical Dates on the Bosphorus
Recorded history of Kazakhstan. Part 2
Materials on theme
Hypotheses will be verified by Y-chromosome
Expanding the horizons of knowledge
On the preparation of the international project "Famine in the USSR: 1929 - 1934 years"
Turar Ryskulov about famine in Turkestan