Home E-resources Landing of foreign archeologists and anthropologists in KazNU

Landing of foreign archeologists and anthropologists in KazNU 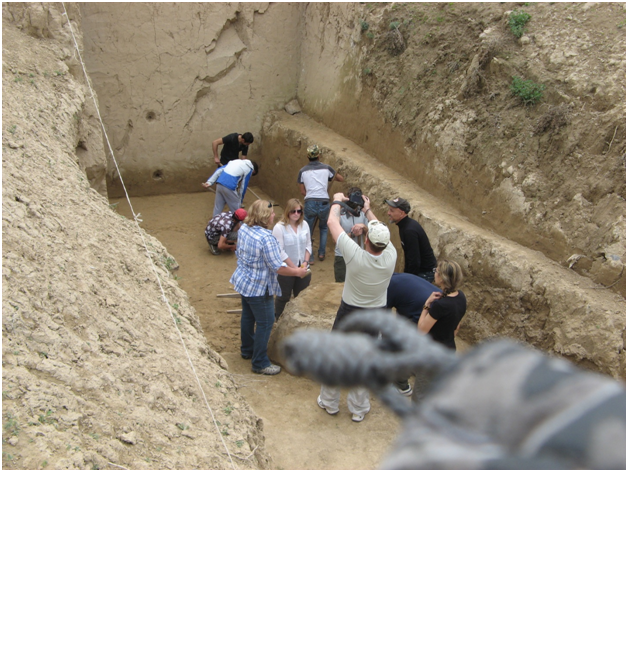 Opening of the international laboratory of geoarcheology under the leadership of professor Taymagambetov Zh.K. was one of breakthrough projects of faculty of history, archeology and ethnology KazNU of

Opening in April of this year of the international laboratory of geoarcheology under the leadership of professor Taymagambetov Zh.K. was one of breakthrough projects of faculty of history, archeology and ethnology KazNU of al-Farabi. where the coordinator of the international projects of UNESCO of Renato Sal (Italy) and research associate Jean Mark Deom (Belgium) entered.

The problem of geoarcheology consists in use of approaches and geology methods to the solution of archaeological problems, namely, geomorphology, adjournment of soils, a stratigrafiya, a hydrological network, climate of this or that time and an arrangement of archaeological objects.

Taymagambetov ZH.K. in the territory of Kazakhstan are open and the stratified Paleolithic monuments Koskorgan, Shoktas, Maybulak, parking of Ch.Valikhanov, etc. are investigated, definition of which absolute age will require methods of natural-science sciences, including to geoarcheology.

Therefore, studying of a paleolith of Kazakhstan enters a new stage and its scientific novelty is that archeologists KazNU of al-Farabi make, in fact, the first attempt of creation of an archaeological periodization of the region with filling of its sections with concrete archaeological complexes and data of paleoecological, geoarchaeological character. For this purpose also a significant amount of new data on archeology, a stratigrafiya, geochronology, region paleontology is introduced into scientific circulation. The basic stratified monuments of a paleolith such as a koshkurgano-shoktassky complex, parking of Ch.Valikhanov, Maybulak, a neolytic cave Karaungur, whole geoarchaeological subregion as basic for studying of this or that region as a whole are allocated. The questions of kulturnotipologichesky and functional accessory of objects are raised.

From May 3 to June 3, 2013 at faculty work with collections of stone tools, give lectures, pass monthly training and take part in archaeological expedition of professor Taymagambetov Zh.K. experts: from the USA professors of faculty of anthropology of Colorado university Michel Glyants, Jason Labell and he is the director of the center of archeology, undergraduates Catharine Horton, Tyler Biton, professor Adam Van Arsdal, paleoanthropologist the USA, Boston University Vellesley, from Germany doctors of science to Rad Peter who presents the archaeological research center and Monrepo's museum, and also Catharine Fitzimmonz from department of evolution of the person of Institute Max Planck of evolutionary anthropology, Zakhari Kofranprofessor Nazarbayev of university, paleoanthropologist from Michigan to the USA. Results will be published in Kazakhstan and in the USA.

Use of materials for publication, commercial use, or distribution requires written or oral permission from the Board of Editors or the author. Hyperlink to Qazaqstan tarihy portal is necessary. All rights reserved by the Law RK “On author’s rights and related rights”. To request authorization email to mail@e-history.kz or call to (7172) 79 82 06 (ext.111)
Қазақша Русский English
MOST READ
Month Year
Burial mounds of the southwestern part of the Semirechye region
Union of the Archives and Library
The referendum on the Constitution is a significant stage of democratization
Heroic mothers of the great steppe
Philosophy of the Emblem
14 monuments at Tekturmas
The rural akims: the country's hope is in the elections
Kazakh historical drama Tomiris premiered in Istanbul
Stolypin about the worries and hopes of immigrants to the Kazakh steppes
ALASH IDEA IS THE PROTECTION OF KAZAKH STATEHOOD
A tireless explorer of the Kazakh land
SWITCHING TO THE LATIN ALPHABET – UNITE ALL KAZAKH PEOPLE
Kunaev Dinmukhamed Akhmedovich
People who eat horses will kill you
Kazakhstan's participation in the Winter Olympics has a long history
Materials on theme
Chirik-Rabat archeological expedition
The results of the scientific trips of Kazakhstani historians and archivists to the major international archival centers
Expeditions of Institute of archeology of Margulan A.H
Scientific and search expeditions