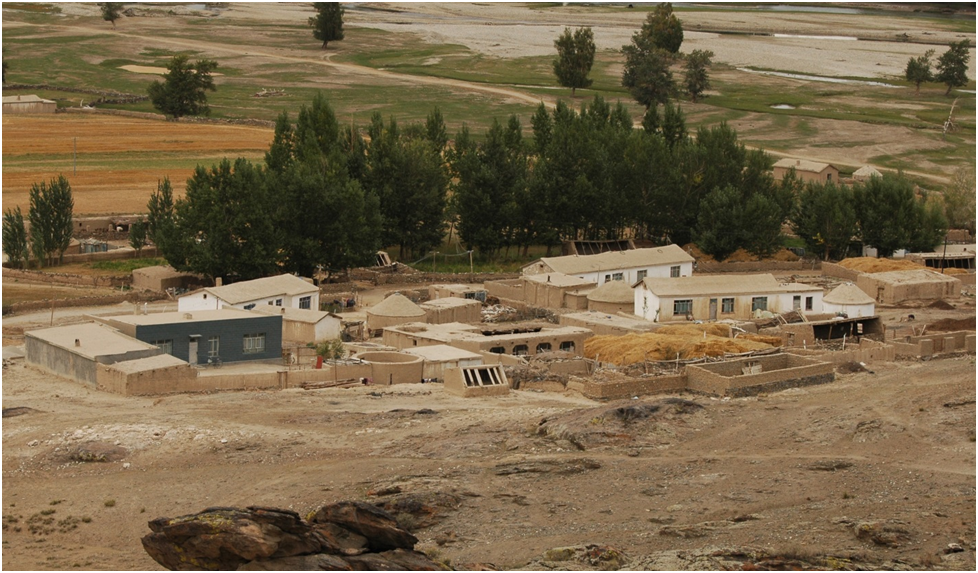 Today cattle breeding settlements of Kazakhs in their classical option can be observed only at Kazakhs of Altai – in the Western Mongolia and the Western China.

System of the settlement of Kazakhs of China

Today cattle breeding settlements of Kazakhs in their classical option can be observed only at Kazakhs of Altai – in the Western Mongolia and the Western China – places of compact moving of the diaspora which representatives and at the beginning of the XXI century continue to live in conditions of a semi-nomadic-semi-settled life.

Materials of research allow to allocate three types of settlements at Kazakhs of China:

– the stationary seasonal – кыстау on a winter pasture, kokteu-kuzeu on spring and autumn pastures;

– the temporary – on zhailyau (summer settlement).

Language of Kazakhs of Xinjiang

Our compatriots living in China, despite the transferred difficulties caused by historical cataclysms, could not only keep all richness of traditional culture – language, religion, traditions and customs, spirit and advantage, art and culture, but also to develop and increase it. It is possible to give existence of the numerous publishing houses which are letting out literature in the Kazakh language as a striking example, and also newspapers, magazines, television and radio which, are completely functioned at the expense of the state budget.

If to speak about features of language of our Chinese tribespeople, to claim about any sharp distinctions, about existence of a special dialect there are no bases. At the same time, certainly, at the small people on number (in comparison with Chinese) in the conditions of other culture and political system of distinction in language couldn't but arise. And, features are available not only in language, they are shown also in valuable reference points and mentality of each of them. Features of language of the Chinese Kazakhs, first, arose because of the use of two languages. If to stop on its sound (phonetic) features, the sound "ш" at the beginning of the word is said by our local compatriots as "h". For example, expression "Shken ш өң кемен шайтасыды. Shal шалғымен шөп шапты" by them it would be said as "Chken h өң кемен tea тасыды. Chal чалғымен чөп чапты". Also often the sound "ф" is replaced on "п", "һ" on "қ", "" on "to".

Folklore of Kazakhs of China

Folklore art of Kazakhs Sintszyanya, having incorporated ancient east poems, and also legends of later period, I underwent in the development big and difficult process. Many late legends appeared on the basis of ancient epic traditions. In these late works of a narration about real events alternate with impregnations of legendary character.

The Kazakh epic tradition Sintszyanya can be classified as follows: the first group is eposes known to all Kazakh people about batyrs ("Kobylanda the batyr", "Alpamys the batyr", "Er Targyn", "Kambar the batyr", etc.), the second group of works is founded on East plots ("Leyli-Medzhnun", "Takhir-Zukhra", "Zhusip-Zuleykh", "Bozzhigit and Karashash", "Shakir-Shakirat", "Zhamsap", "Seyfulmalik-Zhamal", etc.), the third group includes the legends which have appeared in the XVIII-XIX centuries and integrated by idea of fight against the external enemy ("Arkalyk the batyr", "Kabanbay the batyr", "Zhanybek the batyr", "Myrzash the batyr", etc.) . One more group of known works contains reflections about the injustice existing in society, including the social: "Damezhan", "Burkitbay", "Zukhra", "Kerey толкыны", etc. The last group of legends in this classification is devoted to love feeling and narrates history of lovers ("Tukibay-Sholpan", "Erden-Balkash", "Nurlangan and Aygulim", "Hasen-Zhamilya", "Shaykan-Kulyash").

Travel business and Kazakhs of China

Recently development of the market relations in the People's Republic of China promotes universal development of travel business, including, and in Xinjiang. So, in the Altai aimag tourist routes to such monuments, such as, the complexes «Әмірсананың ауызы», «Доғаты жері» are organized. More and more local Kazakhs it is involved in travel business. In particular, the Kazakh population of the next the district near such tourist objects is engaged in the organization of etnoposelok from yurtas (from 100 yurtas and more) in which rest and leisure of tourists, generally from the internal regions of the People's Republic of China will be organized. On specially taken away platforms products of national masters, milk drinks and dishes of the Kazakh ethnic cuisine, etc. are on sale. As tourist objects various types of the Kazakh winterings, summer dwellings are in addition used – got thin. Tourism development in Altai demands production of effigies of wild animals, for photography of tourists against the last. Production of effigies of animals in Altai is considered traditional occupation of local Kazakhs.

Long time, up to the present, Kazakhs of China kept and keep bases of national crafts and crafts in pure form, proving that a genetic linkage with culture of the main ethnic massif and, in fact, being successors of centuries-old traditions. The wide circulation, has various wooden посуда:күбi (the coil for ferment of milk and oil knocking down), астау, тегене, saptyy қ, тостаған, шелек (tselnodolblenny dishes, bowls and buckets). From leather ware until recently were demanded: torsos қ (leather vessels, like flasks), көнек (a vessel for milking of mares), Saba (a vessel for koumiss storage) the.osnovny attention during this forwarding research was paid to female crafts. It was revealed that the most widespread types of female craft are felt production, chiyevy weaving, weaving, an embroidery.

Ethnic consciousness at Kazakhs of China

Level of ethnic consciousness of Kazakhs of China can be tracked on such signs, as a condition of language, preservation of traditional material and spiritual culture, use of symbols, national character and self-identification. Certainly, Kazakhs of China are members of society, as on social and economic, and to political characteristics in many respects differing from our, passed other historical way. All this couldn't but affect features of character of the Altai Kazakhs of China. According to psychologists, the main lines of national character are in constant dependence on a way of managing, features of a life, a social order, climatic conditions, level of ordinary consciousness, communication forms. Many Kazakhs in China still go in for nomadic cattle breeding. Severe conditions of a nomadic life, hard climatic conditions, certainly affected addition of freedom-loving and severe character at local Kazakhs. Features of political life as left the mark, accustomed to conformism. Local Kazakhs give well-aimed characteristics to all nationalities living in the neighbourhood, accurately positioning "we" and "they".

Disclosure of this problem includes clarification of nature of domination in a family, vzaimotnosheniye between spouses or parents, between parents, representatives of the senior generation, children and grandsons, distribution in a family of labor duties, position of the woman in a family, including сатус daughters-in-law, value of material independence of working women, position of the parents living together with a family of the son, etc. These structural elements have absolutely different character at different forms of families. For example, in the incomplete families presented by widows, widowers or divorced, there are no relations between parents. In difficult undivided families, on the contrary, it is necessary to consider presence of representatives of the senior generation and grandsons. It is necessary to consider and that factor that the intra family relations of Kazakhs-oralmanov from China inherited a lot of things from this that was inherent in a traditional family, especially in distribution of duties and intra family etiquette.