Home E-resources "Alash readings: "Scientific heritage of Alash figures on a way to independence of Kazakhstan".

"Alash readings: "Scientific heritage of Alash figures on a way to independence of Kazakhstan". 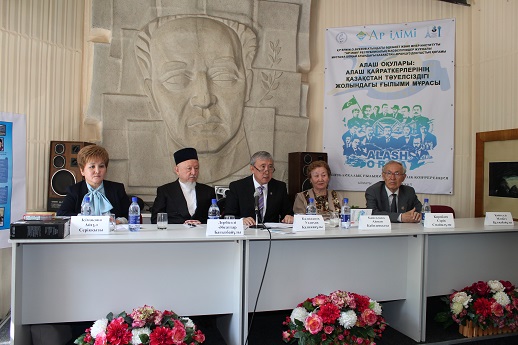 Institute of Literature and Art of M.Auezov name held a conference on scientific heritage of Alash figures

On the eve of Day of memory of political repressions victims and the International Children's Day on May 30 the Institute of literature and art of M. Auezov name together with the republican youth magazine "Arilimi" and the Kazakhstan-French society of friendship of Moustapha Shokay name held republican scientific and practical conference "Alash readings: "Scientific heritage of figures of Alash on a way to independence of Kazakhstan" together with school students.

Opening the conference , the director of the Institute, Doctor of Philological Sciences, corresponding member of the Academy of Sciences of the Republic of Kazakhstan Ualikhan Kalizhanov stopped at the history of the origin of Alash -Orda and its role in the struggle for independence. The leaders of this movement in the early twentieth century reshalisudbonosnye issues of future development.

The role of leaders of Alash in formation of the first sprouts of the Kazakh statehood and in formation of political culture as their ideas and affairs reflected radical expectations and thoughts of the Kazakh people is great. Noting a role and a contribution of alashordinets to finding of independence of the country, acting I emphasized that this purpose gained by eyelids was realized at the First President of RK N.A.Nazarbayev.

Value of promoting of ideas and works of figures of Alash in all spheres of knowledge, literatures and arts among youth which is urged to solve problems of further development of our state was especially emphasized acting.

With huge attention I listened to youth reports of scientists which widely presented a creative heritage of figures of Alash. And substantial the main report of the doctorof political sciences, the professor Venera Zheksembekova "Alash's figures and independence of Kazakhstan" was deep. And substantial performances of young participants of conference from the most different corners of the republic were bright also. According to the papers prepared by them it was felt that school students widely own a material and are keen on ideas of the first harbingers of independence, many of which the bitter fate of repressions comprehended. But their names and acts continue to influence minds of the Kazakh youth.

Use of materials for publication, commercial use, or distribution requires written or oral permission from the Board of Editors or the author. Hyperlink to Qazaqstan tarihy portal is necessary. All rights reserved by the Law RK “On author’s rights and related rights”. To request authorization email to mail@e-history.kz or call to (7172) 79 82 06 (ext.111)
Қазақша Русский English
MOST READ
Month Year
Burial mounds of the southwestern part of the Semirechye region
Union of the Archives and Library
The referendum on the Constitution is a significant stage of democratization
Heroic mothers of the great steppe
Philosophy of the Emblem
14 monuments at Tekturmas
The rural akims: the country's hope is in the elections
Kazakh historical drama Tomiris premiered in Istanbul
Stolypin about the worries and hopes of immigrants to the Kazakh steppes
ALASH IDEA IS THE PROTECTION OF KAZAKH STATEHOOD
A tireless explorer of the Kazakh land
SWITCHING TO THE LATIN ALPHABET – UNITE ALL KAZAKH PEOPLE
Kunaev Dinmukhamed Akhmedovich
People who eat horses will kill you
Kazakhstan's participation in the Winter Olympics has a long history
Materials on theme
Years of creation and priorities of a national historiography
Challenges and innovations in the historical science of Kazakhstan
«Actual problems of investigation and teaching the history of Kazakhstan» Regional Scientific and Practical Conference
Interview of the senior research associate of Institute of history of the state of the Ministry of Education of RK Saule Bagdatova.