Home E-resources “Eurasianism is everywhere, even in everyday life”. Interview with Zh. Yermekbayev

“Eurasianism is everywhere, even in everyday life”. Interview with Zh. Yermekbayev 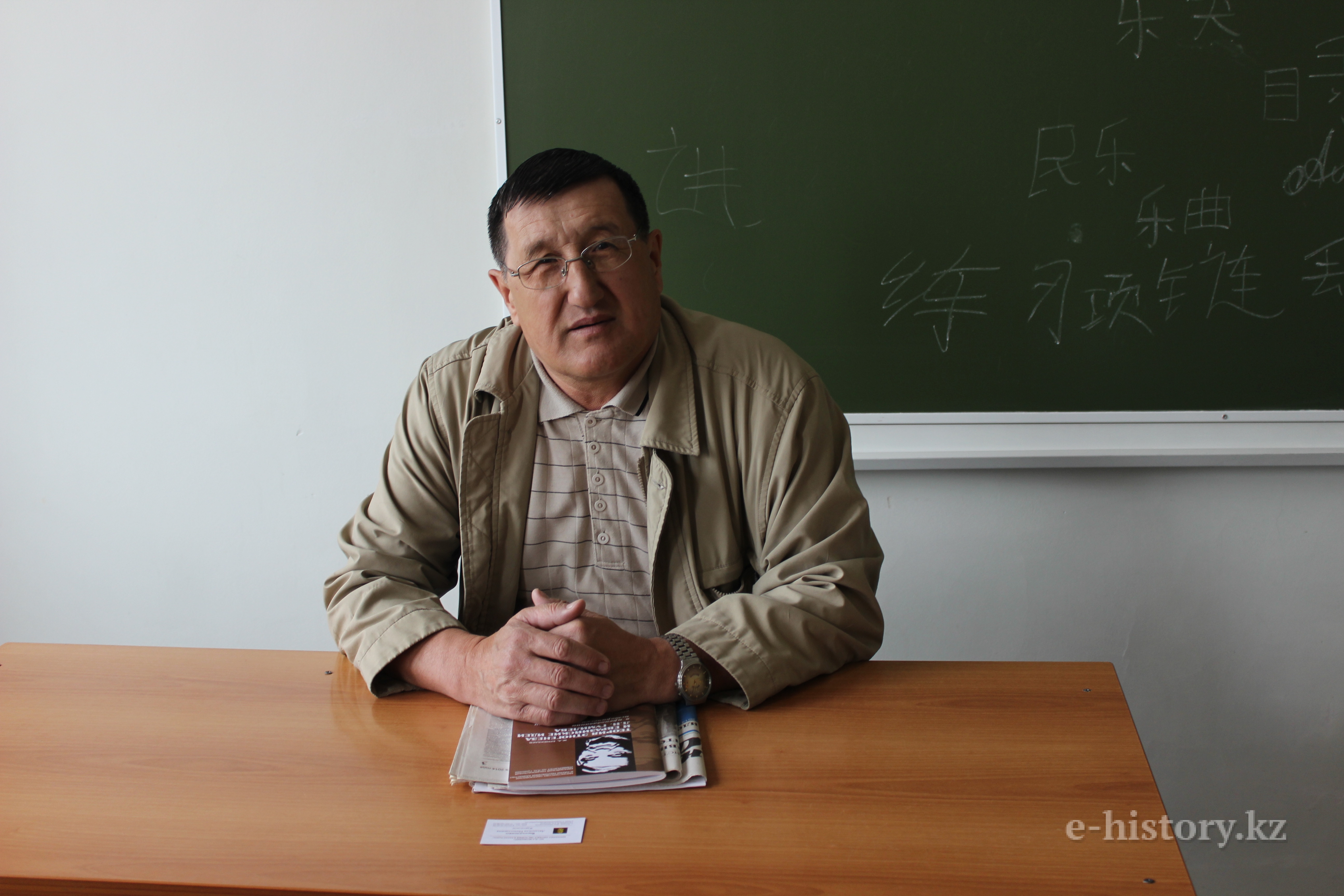 Zharas Yermekbayev while working at the Eurasian University participated in the organization of the museum L. Gumilyov with historian S. Seliverstovym, who was busy working on Gumilev’s heritage. From Karaganda Yermekbaev brought a document which gives evidence that Tolstoy almost a year was in the camp. Then from KARLAG he was transferred to a Siberian camp called Peschannyi. 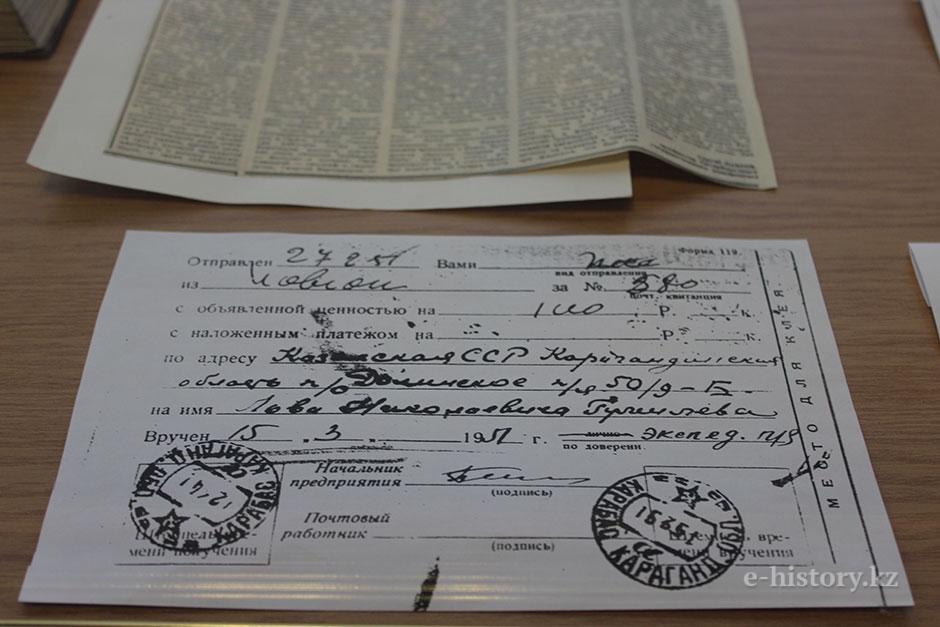 «When I am in St. Petersburg I always stop by the house-museum of L.Gumilyov. For a long time he lived in a communal room and not so long ago before his death he finally moved to an apartment, which located down by the Kolomensky street, where was organized the museum. It was kind of branch of the Anna Akhmatova’s Musuem. He was buried in St. Nicholas Cemetery of the Alexander Nevsky Monastery in St. Petersburg», — says the professor.

As far as I know, L. Gumilyov did not have kids?

«He did not have kids with his wife Natalia, they got married late. He returned from Siberian exile, when he was 44 years. On the issue of children, Natalia always said that our children are our books».

«After the release he did not come back to Kazakhstan. But he wrote a lot about the Kazakhs. He was the first Soviet scientist who wrote about the history and culture of the Turkic peoples. This theme was not forbidden in the Soviet Union. However, at the same time scientific papers dedicated to this subject was very few. L. Gumilyov was the first who studied the history of Turkic Khanate, his Ph. D. and doctoral works were dedicated to the history of the Turks. In his monograph he wrote these words: «Dedicated to the Turkic peoples of the Soviet Union». He did not lose the ties with Kazakhstan. Our compatriots often visited him, also listened his lectures and toke an interview with him.

If you read his monograph «Ancient Russia and the Great Steppe," which is both scientific and journalistic, has many moments where it touches the history of the Kazakhs. 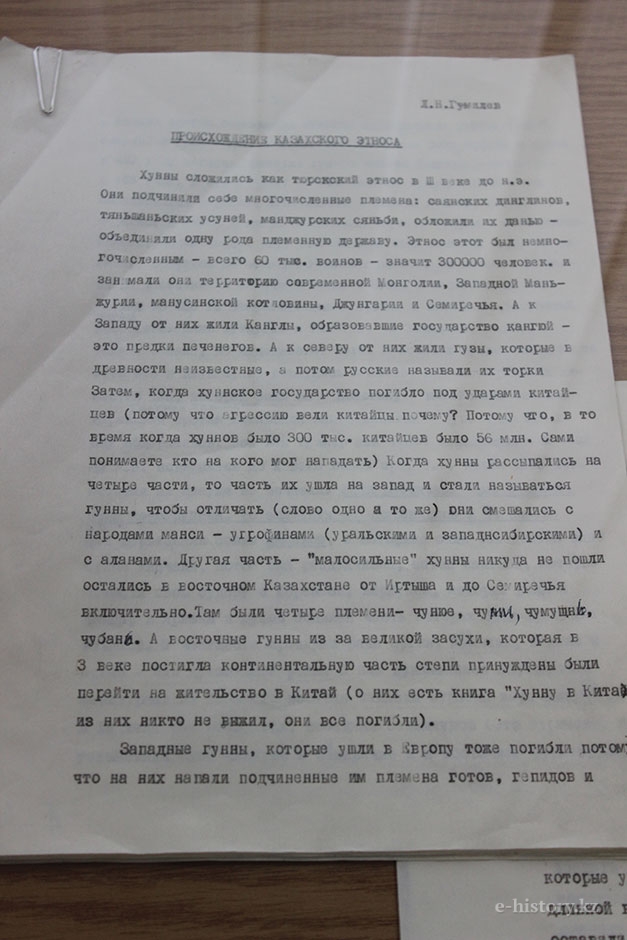 I had a chance to listen to his lectures. One of them was dedicated to Eurasia and Eurasian peoples. At the lecture, he always brought a lot of maps. Generally it has become very popular in the late 80s, his lectures were broadcasted even on television.

Certainly, he had a very good education. He graduated Historical faculty of Leningrad University. In 1948, he defended his Ph. D., in 1961, he successfully defended his doctorate and in 1974 he defended his second doctorate. In the Soviet Union he was the only person who defended two doctoral dissertations, received a doctorate in History and doctor of Geographical Sciences. His idea of Eurasianism in the 60-80s, did not matched with the ideology of that time. However, his works were published and very quickly became fiction, tomes, went from hand to hand. He was very writer. His books were written in easy to read style. L. Gumilyov had a truly artistic talent. The gift of syllable and the gift of the scientist gave such fruits.

However, among the scientists he was like a black sheep. Historians, anthropologists, geographers, anthropologists did not recognize him as a serious researcher. Nevertheless, he was very popular among non-humanitarians: specialists in exact sciences, engineers, technicians and so on. He almost stop reading the lectures at the History Department in the Leningrad University, instead of it worked at the Faculty if Geography at Research Institute. In 1974, he defended his thesis for the Doctor of Geographical Sciences degree. His work called «Ethno-genesis and biosphere of the Earth». 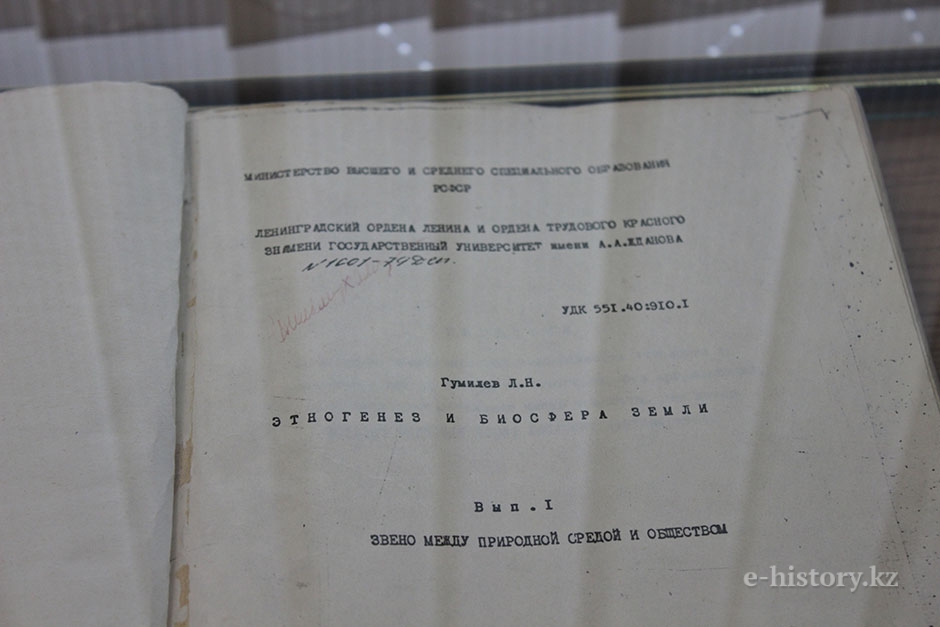 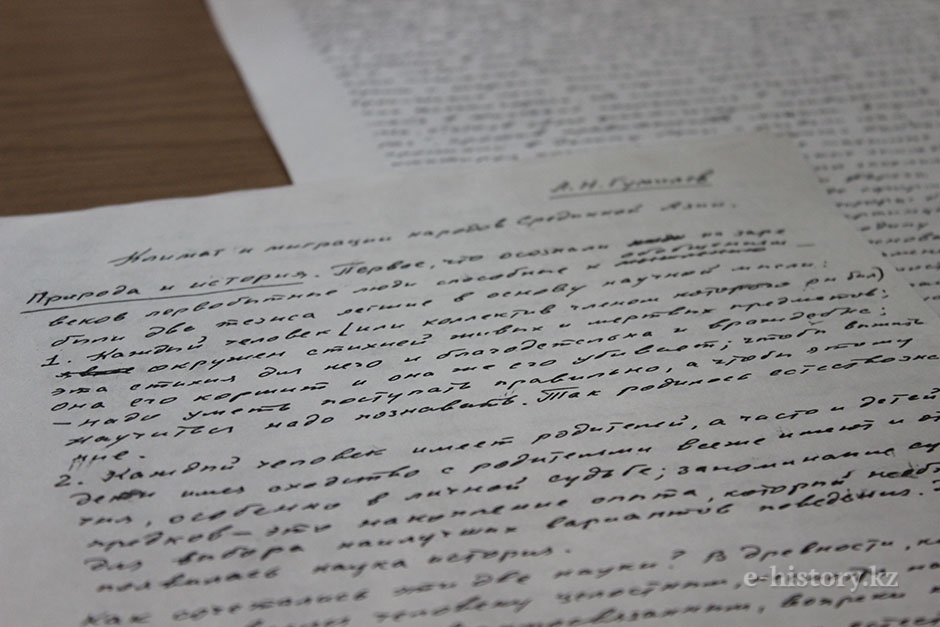 His works had a lot of novelties. He wrote about the nomadic people of Eurasia, history and culture, he linked them with the landscape. Terms like feeding landscape, complementarity and passionarity he used for the first time. However, his name associated with paradoxes like accusation in racism and biologism. It was not a secret that Jewish scientific community treated him negatively. Read his work «The opening of the Khazars», where he writes about the Jews, after which they began to accuse him in Anti-Semitism. There were even serious publicaitons on this topic. Russian researcher, Doctor of Historical Sciences, Professor v. Shnirelman on the pages of the scientific journal very harshly criticized about L. Gumilyov. This relationship is still maintained.

He considered himself as the last Eurasians and perhaps he was right. As among the Soviet scientists who strongly advocated Eurasianism was L.Gumilyov, others scholars did not do so. He linked the fate of the Slavic peoples and the fate of the Turkic peoples, he called this complementarity. 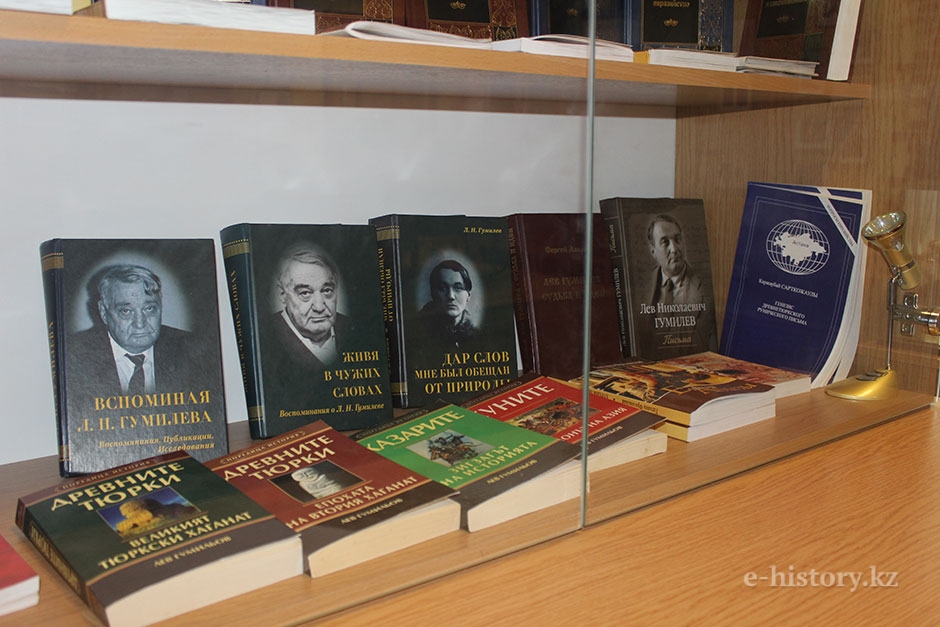 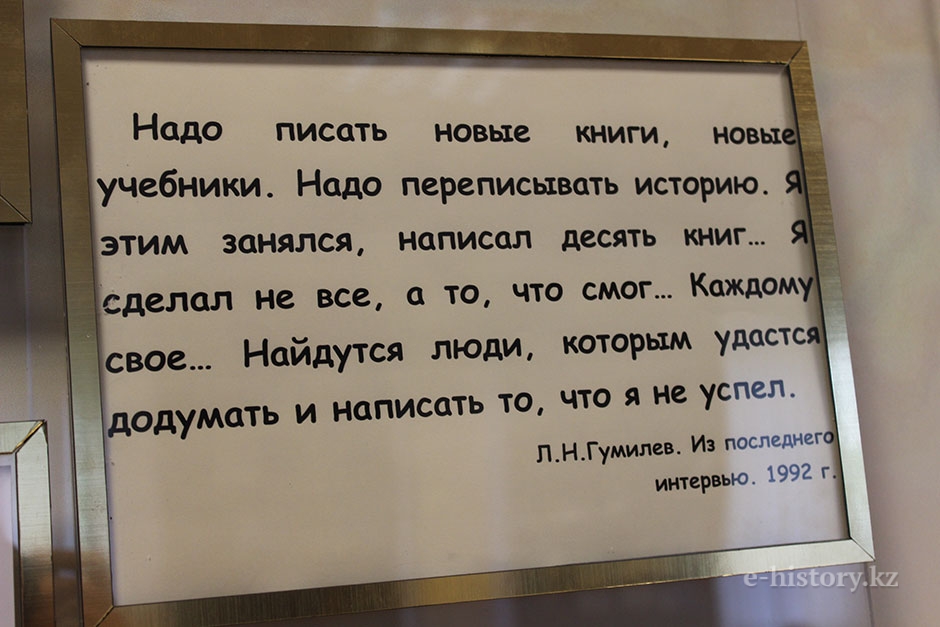 Certainly, he was very upset by the disintegration of the Soviet Union. Despite the fact that he suffered much from the Soviet government, he was a product of it. He lived in the country called the Soviet Union, it was really Eurasian education».

So, do you mean that L. Gumilyov grieved about the collapse of Eurasian ties?

«Yes I do, as separation of economic, cultural, spiritual, humanitarian and moral ties was a tragedy for him».
L. Gumilyov called himself the son of the Silver Age, just to remind that he was the son of the poet Nikolay Gumilyov and poetess Anna Akhmatova. He was a real Russian intellectual, in the sense that he was the true democrat. I do not agree when he was accused in Anti- Semitism. People just misunderstood and commented him».

Please tell us about how it was decided to assign the name L. N. Gumilyov to the Eurasian National University.

«I believe that the name of the university corresponds to it spirit and ideology as it called Eurasian. His entire life Gumilyov preached Eurasianism and cultural-moral ties between our peoples. Particularly he said that there was not any Tatar-Mongol yoke in Russia».

What does mean Eurasian culture today?

«People living at the crossroads of Europe and Asia, all the time overlap, in all respects, not only economic, but moral, cultural, spiritual sense. Uniqueness of the people living on this continent is that they have many things in common. And to break all these connections is impossible. Turkic-Slavic Union is a unique phenomenon, it is exactly appropriate for the Eurasian continent». 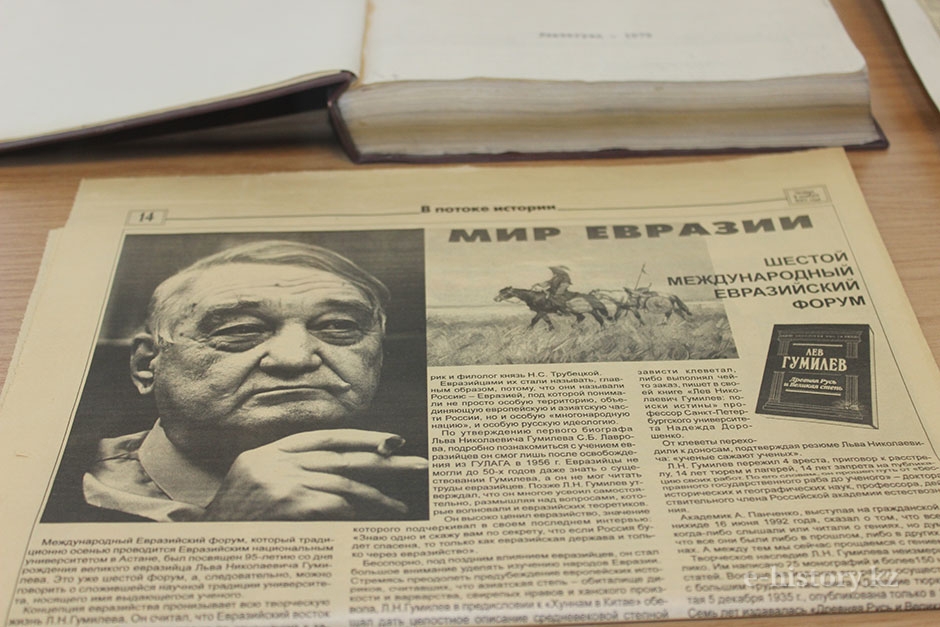 «Yes, indeed, it is the feeding landscape in Gumilyov’s determination. People’s destinies intersected. Kazakhstan like Russia is the country where destinies of millions of people of European and Oriental origin. Eurasianism is manifested in everything, even in everyday life. It is normal as the European Community. They have open borders, single currency and keeping their national spirit, language and culture they each other very well. We all understand when mention about European culture, but nobody knows about Eurasian culture. But now it is known abroad».

Can we call ourselves Eurasians?

«I call myself Eurasians. First, from professional point of view I link with their Russian counterparts. Therefore, the Russian science for me is very important. Eurasian integration is no doubt, this is our life».

Hence, the proposal for the economic support of the idea of Eurasianism happened naturally?

«Yes, 20 years ago N. Nazarbayev proposed the idea of creating a Eurasian Union. On May 29 will be signed the contract. For example Europeans, for 40 years, walked to the Union after the Second World War, they abruptly realized that living in a confined space is not possible».

What, in your opinion, a feature of the Eurasian Union?

«First of all, clearly, it is an economic union, politics shall not be prevailed. Second, this set of cultural, humanitarian and moral relations».

Please tell us about your project «Eurasian as civilizational basis of development of Kazakhstan and neighboring countries in the context of globalization».

«We implemented this project in 2004–2006. At that time we, a group of associates, applied for a grant and won. It was an interdisciplinary project. Many philologists, historians, folklorists, anthropologists, and lawyers attended it. The result of our research work was the publication of the articles».

You organized Eurasian forums, please tell us about this work.

«I was a partner and one of the organizers of the Eurasian scientific forum on the basis of ENU named after L. Gumilev since 2002. The first forum was timed to the 90th anniversary of ENU. We accept applications from all over the world. Visited the famous French scientist Jacques Legrand, A. Khazanov from the U.S., and other well-known scientists from France, Germany, UK, Kyrgyzstan, and Uzbekistan».
Famous French scientist Jacques Legrand, from the U.S. A. Khazanov and other well-known scientist from France, Germany, UK, Kyrgyzstan and Uzbekistan came over».

Use of materials for publication, commercial use, or distribution requires written or oral permission from the Board of Editors or the author. Hyperlink to Qazaqstan tarihy portal is necessary. All rights reserved by the Law RK “On author’s rights and related rights”. To request authorization email to mail@e-history.kz or call to (7172) 79 82 06 (ext.111)
Қазақша Русский English
MOST READ
Month Year
Burial mounds of the southwestern part of the Semirechye region
Union of the Archives and Library
The referendum on the Constitution is a significant stage of democratization
Heroic mothers of the great steppe
Philosophy of the Emblem
14 monuments at Tekturmas
The rural akims: the country's hope is in the elections
Kazakh historical drama Tomiris premiered in Istanbul
Stolypin about the worries and hopes of immigrants to the Kazakh steppes
ALASH IDEA IS THE PROTECTION OF KAZAKH STATEHOOD
A tireless explorer of the Kazakh land
SWITCHING TO THE LATIN ALPHABET – UNITE ALL KAZAKH PEOPLE
Kunaev Dinmukhamed Akhmedovich
People who eat horses will kill you
Kazakhstan's participation in the Winter Olympics has a long history
Materials on theme
Y. Yakusheva: High level of public support is necessary to the Eurasian project
Chronicle of Eurasian Integration
Highlights of Economic Development of EAEU
N. Nazarbayev proposed to create the Eurasian Community (reflected in the print media in 90s)