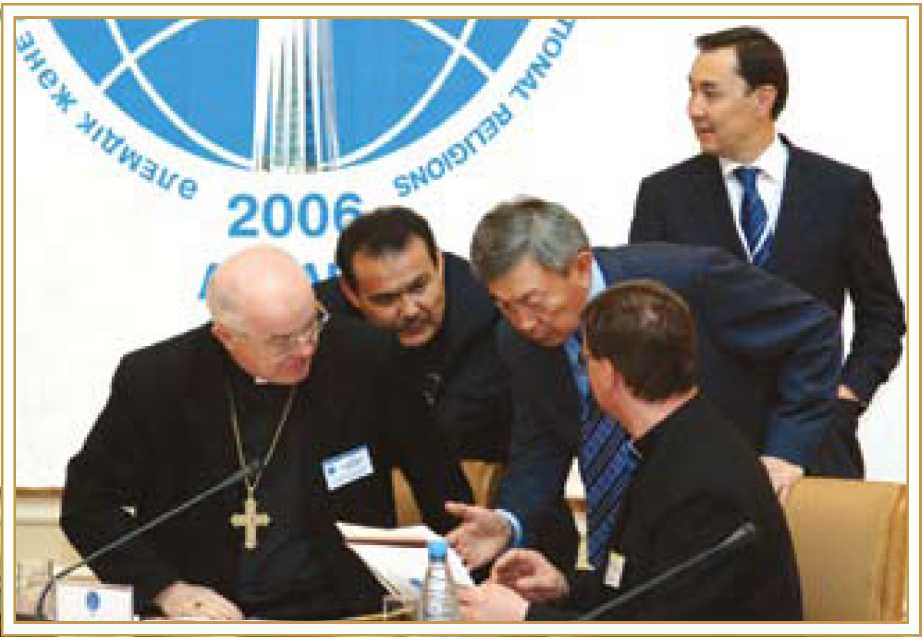 In the book it is shown that the aspiration to the best life of Kazakhstan citizens from year to year grew in overcoming of the dropped-out tests which followed its ways.

All good books are similar in one, - when you will read up till the end, it seems to you that all this happened to you, and so it forever at you and remains: good and bad, delights, grieves and regrets, people and places and what was weather.

Twenty years of history of independent Kazakhstan cause genuine interest in modern society. Scientists-social scientists try to satisfy it with new books. Are engaged in search, systematization, processing of the documentary material allowing full-blooded from different positions and approaches to study present history. The presented work "Independent Kazakhstan: day after day. Chronicle of events" is actual and demanded by the reader's environment. The demand of such material is the proof of that the original documentary material being in a basis of the book, is the central object of studying, both young generation, and the adult. From here and popularity of a chronicle genre of literature at reader's public.

The period of independent development of the country became fatal for the Kazakhstan society where every year it is unique in itself. In the book it is shown that the aspiration to the best life of Kazakhstan citizens from year to year grew in overcoming of the dropped-out tests which followed its ways. The given examples speak about one - the thorny Kazakhstan road was passed by society in order that the subsequent generations lived in worthy conditions. Treasured aspiration of ancestors to independence, creative efforts of the people of Kazakhstan came to the end with creation of the real state. Without going deep into history of an initial stage of independence when Kazakhstan gradually restored the destroyed economy, I carried out reforming of political system, I constructed architecture of safety, I resolved issues of demarcation and delimitation of borders, was the supporter of a peaceful foreign policy, the book allows to track development of many events which eyewitnesses were many Kazakhstan citizens in historical dynamics. Work captured materials small on chronology, but at the same time the significant period - from 2006 to 2011, being logical continuation of the first three books "Independent Kazakhstan: day after day. Chronicle of events".

On a threshold of XXI century Kazakhstan placed the ambitious order - to enter into number 50 of the competitive states of the world. For this purpose all economic capacity of the republic was mobilized. Strategy of the Forced industrial and innovative development of Kazakhstan was that historical document which allowed to carry out purposefully implementation of modernization of economy for decades forward. All these grandiose tasks found the embodiment in reality. In 2010 the program of the forced industrial and innovative development of the country allowed to lift welfare of Kazakhstan citizens, to define development prospects till 2020. In work it is shown through history of regions, work of millions Kazakhstan citizens.

Important achievement of these years was that the Leader of the Nation - N.A.Nazarbayev - showed will and persistence in preservation of the settled social and economic and historical links between the new independent states, and it in turn formed base for implementation of the effective foreign policy, external economic project on creation on a wide Euroasian field of the Common Economic Space (CES), having found reflection in the Customs union formed in 2010. These materials also found the place in work.

Scrupulously picked up historical evidences prove that not casually the first decade of HH_ of an eyelid finally assigned the status of the large Euroasian state which achievements are recognized as all world community to Kazakhstan. Today Kazakhstan - the prospering state taking the place on the political and economic world map.

In the structural plan work is divided, also as well as in the previous three books, for separate years which logically supplement and enrich a historical cloth of the Kazakhstan reality on republican and regional cuts. The book included materials (the taken anti-recessionary measures of the Government, laws, decrees, resolutions) and historic facts which visually show dynamics of growth of welfare of the Kazakhstan society, a sustainable development of economy.

Post-crisis development of Kazakhstan is presented in the chronicle by the numerous actions mattering not only for Kazakhstan, but also all CIS, TsA. Important political events and world scale actions (OSCE summit, the 7th winter Asian games, acceptance and realization of a state program of the forced industrial and innovative development of RK for 2010-2014, X ІІІ NDP "Nour Otan" congress, the 15 anniversary of ANK, the 15 anniversary of the Constitution of RK, early election of the President of RK, etc.) visually illustrate confident steps of the Government on an exit of Kazakhstan from financial and economic crisis and to its introduction in a stage of post-crisis development.

Originators picked up a complex of the documents devoted to the electoral company of 2011 and the relation to this question of electorate, including this question one of central in definition of further development of the country. It will be possible to find in the presented various types of factual providing a lot of interesting, informative, instructive. The collected complex of materials will allow to enrich and expand in many respects knowledge of readers of independence history. All facts given in the book are documentary confirmed with a reference to the source.

The used documentary material of chronicles proves that the country at the present stage sets an example sure aspiration to updating and development, entering the new decade the new economic recovery became which contents. The begun new decade will put on trial new possibilities of the country which realization will be directed, as well as in last years, on creation of the prospering and stable Kazakhstan.

"Independent Kazakhstan: day after day. Chronicle of events" will fill the low-studied materials on present stories. Originators hope that the book can benefit not only to students, undergraduates, teachers in educational process, but also that who is interested in the modern socio-political, economic and cultural processes happening in modern Kazakhstan.

Use of materials for publication, commercial use, or distribution requires written or oral permission from the Board of Editors or the author. Hyperlink to Qazaqstan tarihy portal is necessary. All rights reserved by the Law RK “On author’s rights and related rights”. To request authorization email to mail@e-history.kz or call to (7172) 79 82 06 (ext.111)
Қазақша Русский English
MOST READ
Month Year
Recorded history of Kazakhstan. Part 2
Heroic mothers of the great steppe
How had the World War II been started?
Philosophy of the Emblem
14 monuments at Tekturmas
The rural akims: the country's hope is in the elections
Kazakh historical drama Tomiris premiered in Istanbul
Stolypin about the worries and hopes of immigrants to the Kazakh steppes
ALASH IDEA IS THE PROTECTION OF KAZAKH STATEHOOD
A tireless explorer of the Kazakh land
SWITCHING TO THE LATIN ALPHABET – UNITE ALL KAZAKH PEOPLE
Kunaev Dinmukhamed Akhmedovich
People who eat horses will kill you
Materials on theme
Independent Kazakhstan: Day after day. Chronicle of events (1996-2000) 2 volume.
Independent Kazakhstan: Day after day. Сhronicle of events (1990-1995)
Published books under Goverment programm
Independent Kazakhstan: Day after day. Chronicle of events (2001-2005)