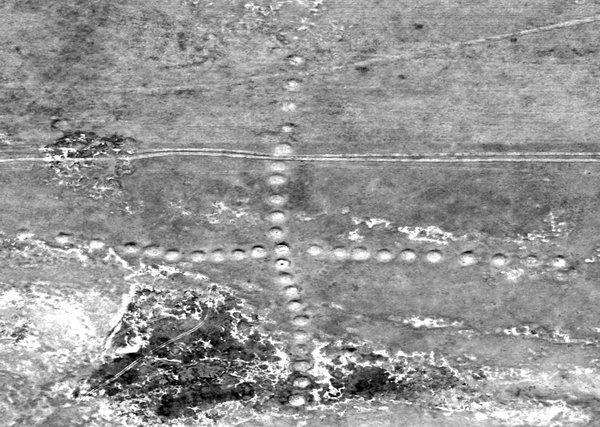 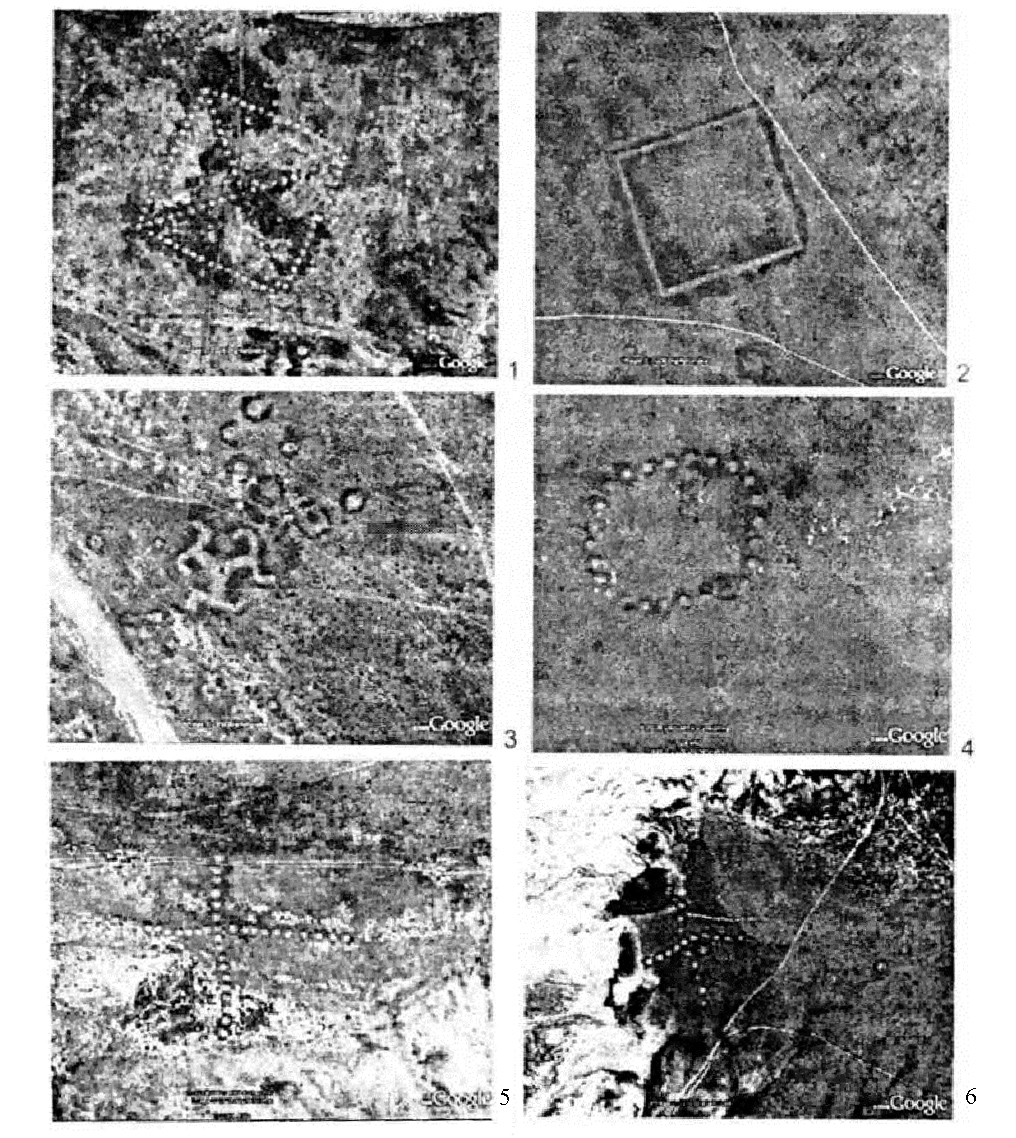 Geoglyphs in the territory of Torgay deflection were discovered in 2007 by studying satellite images available in the program Google. During the period 2007 -2009 period more than 10 geoglyphs were discovered. Today, there are several types of geoglyphs located in Kostanai region:

In the summer of 2007 and 2008, Torgay archaeological expedition organized exploration work on the survey of three objects (Ushtogaysky square, Torgay swastika and Shiliysky square).
Ushtogaysky square (photo 1, 1) located 15 km east of Ushtogay village Amangeldi region Kostanai region is a square shape with marked diagonals. It composed of 101 mounds diameter of 10–12 meter and in height 1 meter. The length of the square’s side is 287 meters, 406 meters length of the diagonal.

During the exploration process one of the mounds located on the diagonal of the figure (from the center of the square, it is the third mound in south-west direction) was excavated.

The mound was removed by shovels. 0, 2 meters layers of the soil were imposed out of excavation area and shifted by bulldozer. To study stratigraphy profile along line 3-B was left. The stratigraphy of the mound is following:

In the mound itself, there were no artifacts that could help date the monument.
Based on the available data, the construction of the excavated portion of the object can be reconstructed as follows: area with a diameter of approximately 10 m was cleared from the soil; then over the platform mound was erected. Ground, apparently, was taken from the territory located around the building.

Unfortunately, it is not possible to date the monument with available data. We can only note that due to high density of the soil constitutes the mound, given the gentle slopes of the mound and uniform the degree of closeness of sod, the construction of the object was, perhaps, not later than the Middle Ages.

Torgay swastika (photo 1, 3) is located on the outskirts of the Urpek village Amangeldi region Kostanai region. Geoglyph is a mound, built in the form of three radiation swastika. Each of the beams ends zigzag figure, the ends of which are bent counterclockwise. The height of the mound up to 0.3 m, beam length is about 33 m, width at the base is 13–15 m, width at the end is 10–12 m. Zigzag shape length of 40–50 m, width 6.5 m, length of the bent parts 15–20 m. center facilities available cavity diameter is 4 m, a depth is 0.3 m. Swastika in a circle with a diameter is about 90 m.

Near the construction there are small mounds with diameter 10–15 m and a height 0.2–0.3 m, surrounded by a moat.

Excavation work on the project is not carried out, in order to avoid destruction.

Date this facility by the signs can be done in a wide range from the Bronze Age to the Middle Ages.

Shieli square (photo 1, 2) is located to the west of Kayindy village of Arkalyk district of Kostanai region. Shieli square is a square area, surrounded by a moat shaft and located on the outer side. Length of a side of a square is about 225 m. Shaft’s width is 10–12 m, the height is 1–1.5 m, width of the trench is 10–12 m depth is up to 1 m. Southern entrance to the building has submitted rupture of the shaft and the pit.

A hundred meters to south of the square there is a flat-topped mound, it was built from the ground, the diameter of the mound is 30 m, height 1.5 m, it ringed by a moat width is 10 m, a depth is 0.8 m.

A hundred meters to the north of the square there are five circles representing the site, ringed shaft and lined up parallel to the side of the square. Diameter of circle is 30–35 m, the width of the shaft is 4.5 m and height is 0.2–0.3 m.
Inside surface of the square is smooth. There are no traces on the construction. In the north-western part of the observed clusters of ceramics, presumably the medieval age, the individual fragments are found in the rest of the site.

The historical documents, particularly the «Day notes journey of Captain Nicholas Rychkova in Kirghiz-Kaisak steppe, in 1771» were used during the work on this object. N. Richkov while traveling has discovered the ancient settlement «lengthy fortified ramparts and moats. The city was made on the similarity quadrangular castle, with equal side of shafts.

On the east side there is still visible earthen gate, fallen shafts and ditches, which lost their depths. All of these indicate the antiquity of this place, but noteworthy ruins neither in nor out of the shaft is not visible, except tile and stone pain»(N. Richkov 1772, pp 63–64).
Comparing today’s data, we can assume that N.Richkov and we are talking about a single object. Construction of a given object was made not later than the Middle Ages.

Besides, at this point, the study of satellite imagery can provide preliminary information on three more objects.
Large Ashutastinsky cross (photo 1, 5) is a cross-shaped figure, which consists of 38 mounds and the length of the figure is 436 m.

South Torgay cross (photo 1, 6) is a cross-shaped figure, which consists of 20 mounds and the length of the figure is 195 m.

Torgan ring (photo 1, 4) is a circle, which consists of 25 mounds and diameter of it 170 m.
Geoglyphs of Torgay is a unique phenomenon. It seems that the study of these objects will give a lot of new information, both material and spiritual life of the ancient inhabitants of Torgay steppe. But at the same time, we believe that further study of the described structures is only possible with the use of natural science methods (ground penetrating radar, etc.), because the use of traditional methods (excavation) will lead to the destruction of unique objects.

A. Logvin, I. Shevnina, D. Dey
Kostanai archeological laboratory under the Kostanai State University named after A. Baitursynov.

Use of materials for publication, commercial use, or distribution requires written or oral permission from the Board of Editors or the author. Hyperlink to Qazaqstan tarihy portal is necessary. All rights reserved by the Law RK “On author’s rights and related rights”. To request authorization email to mail@e-history.kz or call to (7172) 79 82 06 (ext.111)
Қазақша Русский English
MOST READ
Month Year
A role of Buddhism in formation of Central Asian mythologies
From the story of a blood feud
Kazakh historical drama Tomiris premiered in Istanbul
ALASH IDEA IS THE PROTECTION OF KAZAKH STATEHOOD
Stolypin about the worries and hopes of immigrants to the Kazakh steppes
A tireless explorer of the Kazakh land
SWITCHING TO THE LATIN ALPHABET – UNITE ALL KAZAKH PEOPLE
Kunaev Dinmukhamed Akhmedovich
People who eat horses will kill you
Kazakhstan's participation in the Winter Olympics has a long history
Rebooting a field of science and education
Recorded history of Kazakhstan. Part 1
Historical Dates on the Bosphorus
Recorded history of Kazakhstan. Part 2
Materials on theme
Martial Katafraktaries of the Medieval period
The treasure from Sayram Medieval site
The "Princess" of Urdzhar
From the heart of millennium