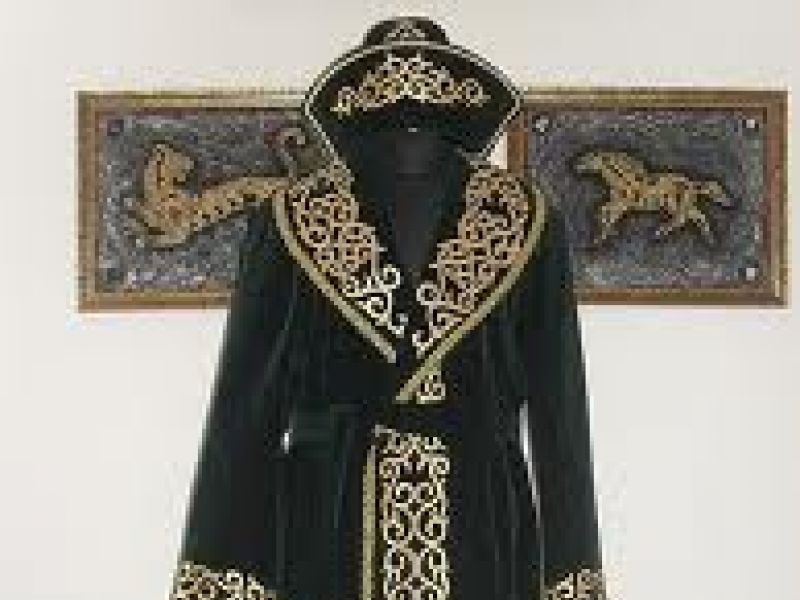 From the article: "A Study of history of folk costume."

The dressing gown, shapan, is a basic and ancient form of clothing of the Kazakhs. Its images could be found on the stone sculptures (IX-XIV). Both men and women wore it. The bathrobes were sewn from suede, as well as from imported silk, woolen and cotton fabrics. In Russian sources, the bathrobes were often called caftans. The beautiful bathrobes can be seen in the photos of A.I.  Shpakovsky, who photographed a large group of the Kazakh nobility in Petersburg. Among them - Dauletkerey Shigaev, who known as a composer, Eset Kotibarov, Mahmoud Dzhanturin. The dressing gown made from the expensive fabrics and with the tambour embroidery were sketched from nature by the artists A. E. Martynov and E. Korneev. The pattern of the robe with the red cloth made by the artist Babikov is also quite popular. Subsequently the artists K.F. Gun and Grusso copied it. This robe was embroidered with tambour. The main motive of embroidery is the concentric circles and medallions, which arranged in rows and fringed with black and white lines. Within each circle, (solar symbol) the star is embroidered with white silk, moreover, there are five images of the open palm and four pairs of ram horns in the stripe around the circle. The tree branches, buds and spruces are embroidered between the medallions. T. Atkinson has made many documentary drawings of the life of Kazakhs. Here is how he describes the festive clothes of the Kazakh nobility of the 19th century: “My host was dressed in a black velvet gown, he had a beautifully embroidered hat on his head and the boots on the hills made from the red leather. His wife was dressed in a silk robe, colored with yellow, red and green tones, which gave it a very elegant look… Sultan wore a tight silk headdress (skullcap), which was beautifully embroidered with silver. He was dressed in a silk purple robe; his boots were made from red and brown leather. The wife wore a black robe from kafna, a white headdress that was pointed upwards, with falling to the waist ribbons, beautifully embroidered silk at the edges. «The most beautiful gowns were used by the famous Kazakh Akins, "Saly" are the wandering singers and musicians. In 1846, orientalist Uslar Kokchetav met a large group of singers, who participated in the folk festival. According to the story of Uslar: "They all were well dressed and have earned the name"sal" - dandies. They mostly preferred the red color (or purple) as the main color of their robes. However, they are the most desperate dandies, the steppe lions; they prefer robes and the suede trousers, brightly embroidered with silk. They usually sew ths small plants or birds on them.