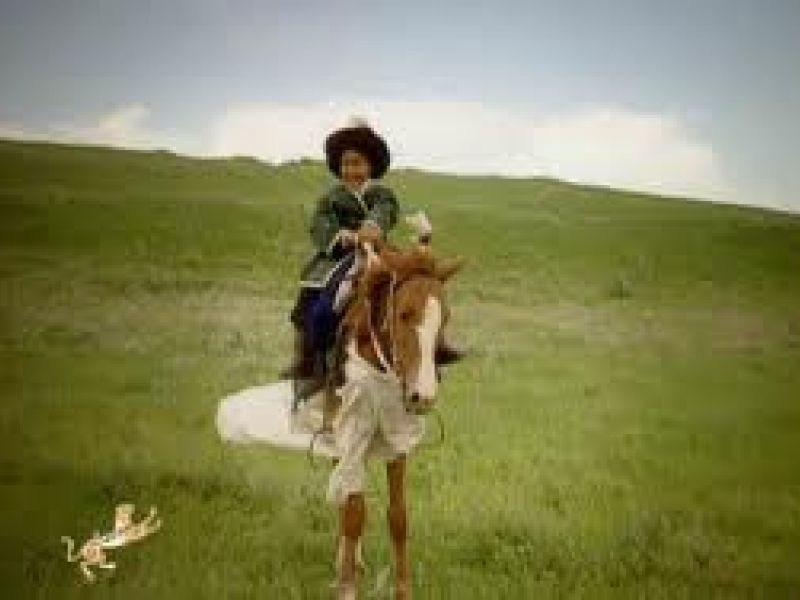 The horse occupied a special place in religious and mythological worldview of nomadic people. This topic has long been a subject of research of many scientists.

Among the four main species of domestic animals in the everyday life of the nomads, the horse has always been valued above the others and occupied a special place. "Lion is the king of beasts, the horse is the king of livestock", "Horse is the wings of Batyr", "The lucky horse will help the unlucky rider" - so say the folk sayings.

"Life can invent all sorts of things, but if you do not have a good faithful horse, this is equivalent to your death" - sung in the folk song.

The Kazakh people appreciated horses, lovingly called them "wise animal", "tongueless man", "human-beast". Their love for horses was so big that they called their own children horse nicknames “my foal”, “my colt” – “kulynym-kulynshagym”, and a fair and honest man was called “agramak”. At the same time, the horses were called human names, for example “karagim” – the pupil of my eye”, “shyragym” – the clear light etc.

Such an attitude to the horse, the exaltation and reverence is associated with the leading role of this noble animal in the nomadic life and life of Kazakhs.

There is a group of customs and beliefs associated with the horse, which are closely intertwined with periods of human life (birth, childhood, adolescence, youth, adulthood, marriage, death and funeral).

When the boy turns three years, he saddles a horse and trains to ride. Ashamay is a type of saddle, which made ​​specifically for teaching a child to ride. Just like the classic saddle, ashamay has two sides (front and back), two sides, okpan. Instead of stirrups, they use tepkishek. Tepkishek is a small saddlebag made of felt. To make tepkishek beautiful, it should decorated with cloth from two sides. Another part of Ashamay is koltyrmash. Koltyrmash is a thin support stick that connects the front and backside of Ashamay.

On this day, the child sits on a horse, all the people from village are gathered together. The feathers of eagle owl were sewn to the mane and tail of the horse as well as to the hat of child, who was dressed in new clothes from head to toe. Kazakhs appreciated the eagle owl and said, "Eagle-owl is a bird, who protects from evil spirits and demons".

A big attention was paid to training the horse, on which the child should ride. He was supposed to be gentle and beautiful. The horse should be about the same age as the boy, three-year or four-year. The honor of lifting the boy into the saddle on the horse was granted to one of the best riders. The boy sat on the horse, his legs were in tepkishek, and his loin was wrapped in a thin blanket and tied to koltyrmash so the body would not be hurt. At this moment, one man comes out of the crowd and says:

Let the child does not get tired on the road

The boy is sitting on a horse, hands outstretched in front of him, asking the blessing of the elders of village. Elder said the following:

Go through the high mountains,

Through the fast river

Through thick and impenetrable forests,

Through the large lakes,

Go through the desert,

Where the bird's wings are tired.

Find the way to off-road,

Be ahead of the troops in battle.

Let your horse be always ready

I wish you this.

So be it, Allah is great!

After the blessing, a child puts the reins in his left hand and a whip in his right hand. Then people scatters shashu (usually sweets, etc.), and say wishes. Dzhigit travels to aul along with the child. People throw shashu, sew the eagle feathers, fringe, coins and beads to the clothes of the child. When a child gets tired, he supposed to go back home while being painted and gifted by his fellow citizens. In his honor, people kill the cattle, invite guests and arrange baiga, toy. The child's parents give rewards to the aksakal who blessed their son on the good life and to jigit who put their child on ashamay. The holiday, which is dedicated to this joyful event, considered as one of the most notable events in people’s life.

The rich Kazakhs - the bai of their children, who sat down on a horse for the first time, they were allowed to travel in front of the caravan.

I did not have a son,

I did not put him on ashamay,

Did not hold him before the caravan,

Did not kiss him in front of his peers,

As stated in the poem "Er-Sain".

This event (sitting on ashamay) is the first serious step in life of child. Nomads gave it a special meaning. K.L. Zadyhina argues that dedication of a horse to the child as well as the custom to put a child on a horse is a transitional form of initiation.