Role of traditional religions in counteraction to extremism and terrorism 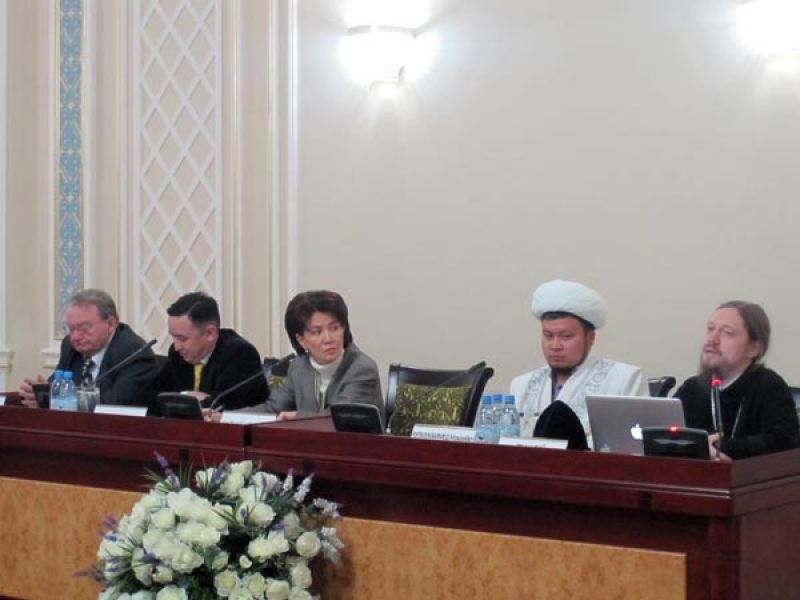 MINISTRY OF EDUCATION AND SCIENCE OF THE REPUBLIC OF KAZAKHSTAN

ASSOCIATION OF SOCIOLOGISTS OF KAZAKHSTAN

ROLE OF TRADITIONAL RELIGIONS IN COUNTERACTION TO EXTREMISM AND TERRORISM

The scientific and practical conference "Role of Traditional Religions in Counteraction to Extremism and Terrorism" took place in Almaty on December 21, 2011.

Conference was held within the state social order on implementation of socially significant project "Carrying Out Complex of Actions for Promotion of an Interfaith Consent and to Formation of Tolerant Consciousness" with support of Management of domestic policy of akimat of Almaty. As the organizer of conference the Association of sociologists of Kazakhstan acted at scientific and methodical providing with its Institute of philosophy and political science of KN of MAUN of RK.

The subject which has been taken out for discussion at conference, is extremely actual for the Kazakhstan society at the present stage of its development. In the list of threats of national security it is religious motivated extremism and terrorism come to the main positions – and one it forces expert community to pay to this perspective special attention. Leaders took part in work of conference религиоведы, political scientists, philosophers, leaders of traditional faiths, representatives of NGO. The course of conference was shined by the Kazakhstan mass media.

At conference reports and speeches of staff of Institute of philosophy and political science of KN of MOH PK were submitted: E.U.Baydarova, E.E.Burovoy, V.Yu.Dunaev, A.G.Kosichenko, M. M. Nurgaliyeva, N.L.Seytakhmetova, M.Z.Izotov, interesting messages were made by representatives of DUMK and the Metropolitan district of Russian Orthodox Church in Kazakhstan. In the subsequent discussion took part both scientists of Institute, and teachers of a number of leaders of higher education institutions of Almaty, Shymkent, Turkestan. Discussion revealed the sharpest aspects in research of such phenomena as extremism and the terrorism, resorting to pseudo-religious rhetoric, and I planned some directions of deepening of scientific and expert maintenance of processes of counteraction to extremism and terrorism.

As recommendations at conference the following offers were stated:

1 . Leaders of traditional faiths have to make every effort for a dethronement of ideology is religious motivated terrorism. Fetva, published DUMK, and directed against "Hizb-ut-Tahrir" and a salafiya, play the positive role, but counteraction to extremism and to terrorism at dogmatic level has to be strengthened. It is necessary to fix anti-Islamic essence of terrorism in public opinion, and it demands everyday and laborious work, including, and by means of mass media.

2 . Integrative character of protest potential allows to connect illegal forms of its manifestation with false perception of religion. The Islamic ideology is present at socio-political space of Kazakhstan because Islam (as peace and humane religion) isn't opposed to Islamism. Islam today will involve in processes which can be illustrated with the following scheme: Islam in its true essence – Islam politicization – Islamism – extremism – terrorism. This scheme needs to be broken off, and, thereby, to deprive of extremists and terrorists of opportunity to resort to Islamic rhetoric.

3 . It is necessary to expand methodology of researches in the field of religious studies, having enriched it, along with actually politological methods, deep philosophy, cultural science, divinity, an axiology. In further activity of department of religious studies of Institute of philosophy and political science of KN of MOH PK it is necessary to proceed from need of the comprehensive analysis of the most difficult processes proceeding in the religious sphere of the Republic of Kazakhstan.

4 . Counteraction to extremism and terrorism are capable to render not only traditional religions, can serve this purpose and activity of a number of new religious movements, extra confessional world outlook ideologies. This potential needs also to be used.

5 . In complex counteraction the terrorism needs to pay special attention to patriotic and moral education of youth – as to a social group which is in the center of influence of Islamic preachers. It is necessary to find specific forms of "withdrawal" of youth from under this influence.

6 . It was noted that the Law RK "About Religious Activity and Religious Associations" adopted in October, 2011, fixes and concretizes a freedom of worship and, along with it, gives to the state opportunity more effectively to fight against the negative phenomena in the sphere of the state and confessional relations.

7 . The religion in the modern world turned into the effective mechanism of geopolitics. Many forces use today religion for implementation of the pragmatical purposes. Methods of involvement of religion in protest movements are developed. All this should be meant, реализуя counteraction programs to extremism and terrorism.

8 . As Islamists use the contradictions which are available in socio-political, economic, cultural, interethnic spheres now in the sermons, it is necessary to solve real problems in these areas of social development. Their suspense gives arguments to religious radicals. The circle of the problems most urgent for the region is outlined long ago: corruption, lack of social justice, unemployment among youth, absence of "social elevators", a poor development of democratic institutes, etc. The solution of the designated problems is the most effective form of fight with is religious motivated extremism and terrorism.