Years of creation and priorities of a national historiography 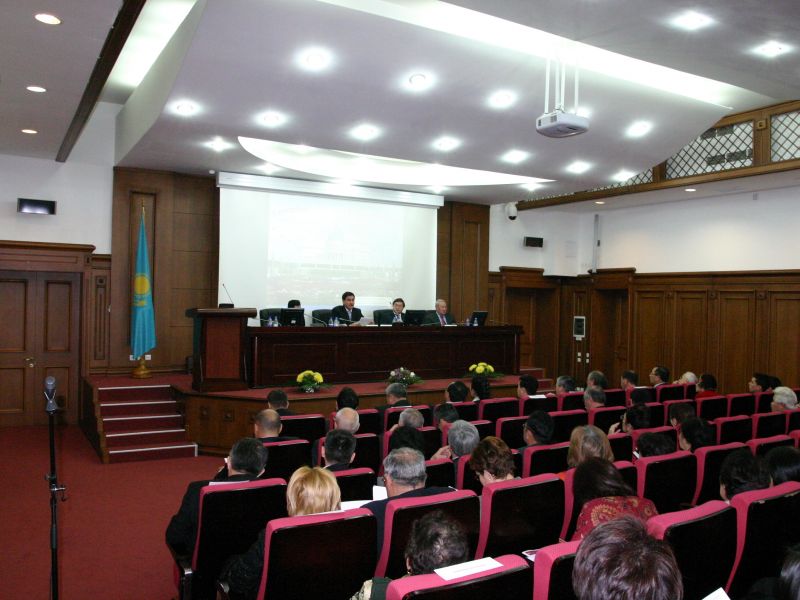 At Institute of history of the state of KN of MOH PK republican scientific and practical conference on the subject "YEARS of CREATION AND PRIORITIES of the NATIONAL HISTORIOGRAPHY", devoted to the Independence Day took place. Prominent Kazakhstan scientists-historians, political scientists, sociologists, representatives of public organizations, teachers of higher education institutions took part in work of conference.

The director of Institute, the doctor of historical sciences, professor B. G. Ayagan the performance opened conference work. It, in particular, having noted achievements of domestic historical science, I focused attention of participants of conference on a condition of modern science and problems of research of national history, I brought a number of offers for the solution of problems and I urged scientific community to combine efforts for implementation of joint researches.

The special attention was paid by participants of conference to consideration of stages of formation and strengthening of independence of Kazakhstan, a role and value in it the First Leading President of the nation Nursultan Nazarbayev who put forward in the center of the Kazakhstan foreign policy the principle of multipolarity in the international relations, undertakes active actions on deepening of the Euroasian integration and cooperation, a republic evolyutsionirovaniye from very few people in the world of the known country to the chairman of OSCE, dear and authoritative member of the world community. The condition of development of modern Kazakhstan, tendency and prospect of internal political development of the country was subjected to the scientific analysis. Work of conference will receive reflection in the collection of materials.

During conference the presentation of the encyclopedia "Sh. Ualikhanov" prepared by scientists of Kokshetausky state university took place; a number of scientists for fruitful work is honored to become academicians of Academy of history and social sciences.