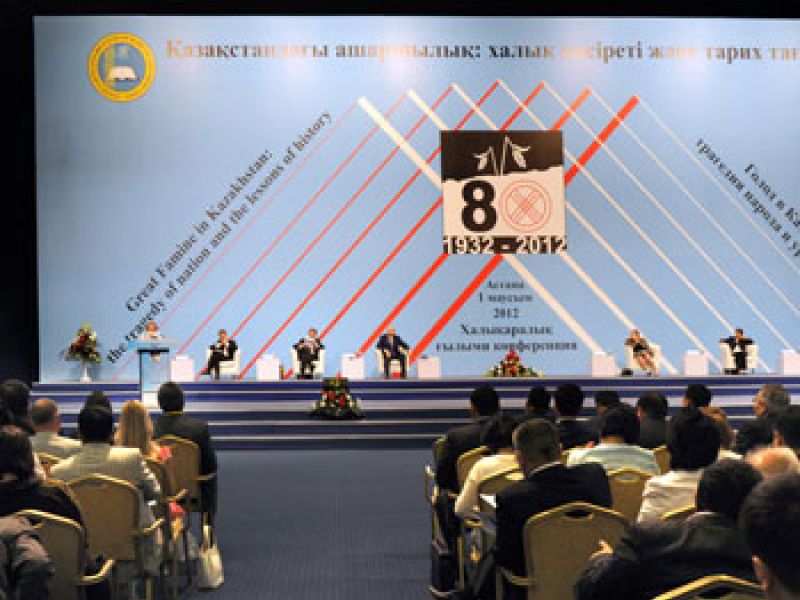 In Astana in the Palace of Independence the International scientific and practical conference "Hunger in Kazakhstan took place: tragedy of the people and history lessons".

In work of a forum took part the state secretary of RK Mukhtar Kul - Mohammed, Minister of Education and Science Bakhytzhan Zhumagulov, deputies of Parliament, representatives of diplomatic corps and foreign embassies in RK, and also leading scientists - researchers of this subject from the USA, Australia, France, Germany, CIS countries and other states.

Opening conference, Mukhtar Kul - Mohammed emphasized: "The head of state, opening the Monument to hunger victims in Kazakhstan, I noted that it we pay a tribute to the memory of millions innocently lost compatriots. At the same time it is important to study comprehensively the reason and consequences of the national tragedy. It is sure, the scientists who have gathered for this conference from more than twenty countries of the world, will bring the contribution in gap completion in studying of a subject of mass hunger in the republic".

The director of Institute of history of the state of MOH PK professor Burkitbay Ayagan considers that ideological tires of collectivization and Famine-Genocide are covered in political doctrines of the Bolshevism and only partially are explained by natural cataclysms. The same opinion at the director of Institute of ethnology of. C.Valikhanova Hankelda Abzhanova: hunger - confluence of the objective and subjective reasons. Objective is the agrarian and personnel policy pursued by Bolsheviks. Subjective it is connected with Goloschyokin's activity, with his illiterate management.

Really, such scales of hunger weren't in the republics with mainly cattle breeding way of life - in Kyrgyzstan, Kalmykia.

The figure - at least 1,5 million victims which were lost for so short interval of time, still demands specification and for certain will grow as hunger and death are accompanied by epidemics which struck first of all children. Besides, most likely, victims weren't considered when crossing borders which retaliatory groups pursued. According to the estimates of scientists, in 1929-1931 there were 372 revolts to participation over 80 thousand people.

Historian Zhuldyzbek Abilkhozhin is sure that hunger in Kazakhstan was not only in 1931-1933. Hunger of 1921 in the Western Kazakhstan which struck mainly farmers is a little shined. Was similar and in 1945-1948 that too it was suppressed. Thus, as the scientist noted, there are no data on cannibalism cases as it was in other affected republics, and only exceptional cases of eating of corpses were reflected in documents.

Upon termination of conference its participants adopted the resolution in which, in particular, it is noted that for further studying of problems of hunger in the 30th years of the XX century it is necessary to come into contacts with universities, scientific centers, museums, archives, humanitarian funds of Kazakhstan, and also the near and far abroad.

It is offered to publish materials of a forum in the form of the collection of scientific articles, and to include a special course in training programs of higher education institutions of the republic "ly zht" (Great hunger): memory and history lessons". The offer to create the Grief Book by analogy to Books of Memory of victims of war was heard also. It is decided to carry out now conference every two years.

In the foyer of the Palace of Independence the impressive exposition with the name of the same name "Hunger in Kazakhstan 1931-1933 was developed. Facts and documents. Exhibition of archival documents". It included original documents: reports, correspondence of governing bodies, messages on death, people and epidemics, terrible photos. One of the most gloomy pages of our history is so reflected.