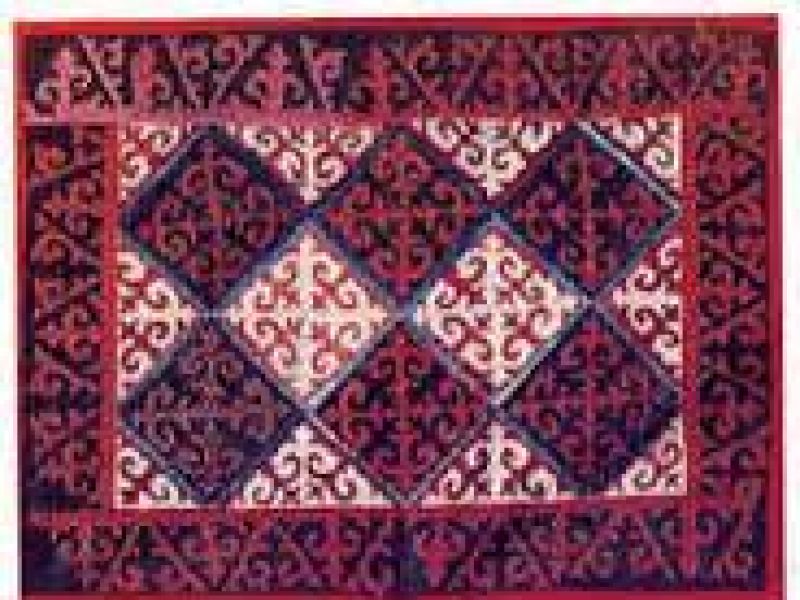 From the article: "A Study of History of folk costume".

Felt is one of the traditional materials of outerwear of the ancient pastoralists. Mahmud Kashgar wrote about clothes made of thin felt. According to the observations of Paul Yoviy Novokomskiy (16th century), the steppe inhabitants do not delivered anything other than flocks of fast horses and the famous white materials, they were made not from woven yarns, but from wool, they used to prepare the felt ependytes, which served as a good protection from the rain and bad weather, they looked very beautiful.

The old cloak made from a thin felt and embroidered with silk, is stored in the Hermitage. It sleeveless and has an ancient form of military capes, slightly elongated, with a narrow shawl collar. The skirts, hem, collar and armhole are edged with black cord and sewn with stitch. There some ​​cuts on the sides of the cloak, they are sewn with narrow strip. Except for the top, the cloak is entirely embroidered with large concentric medallions that symbolizes the sun. The white star is inscribed in the center, the figure that resembles the silhouette picture of a soaring eagle, a symbol of power, is embroidered on the top.

This is one of the oldest types of outerwear, as well as "Kattau", the coat is made of thin white felt. The Kattau was presented at the Third Congress of Orientalists from Atbasar. Among the exhibits are the leather coats that decorated with silver plates, big buttons, and gold, and owned by Meiram Dzhanaydarov. Apart from the fleece, the Kazakhs also used the camel wool. Claudius Elian wrote that the country near the Caspian Sea “has a lot of camels… They are covered with fine hair: their hair is very delicate, so that they quite soft just like the Milesian wool. The priests and rich people of the Caspian used the dresses that were made from such wool. According to Marco Polo, karluks wove the best cloth from the camel's hair in the world. They did a lot of beautiful white cloth and traded with other countries of the world.

The most ancient type of the clothing is shekpen (chekmen), which is a long cloak that made from camel wool. It helps to protect the person from rain, rainstorm, and any weather. The shekpens were made of undyed wool (yellow, white), painted in blue, purple and other colors. The ceremonial shekpens were made of dyed wool; their seams were trimmed with lace. The blue Ceremonial shekpen was exhibited at the University of Moscow...