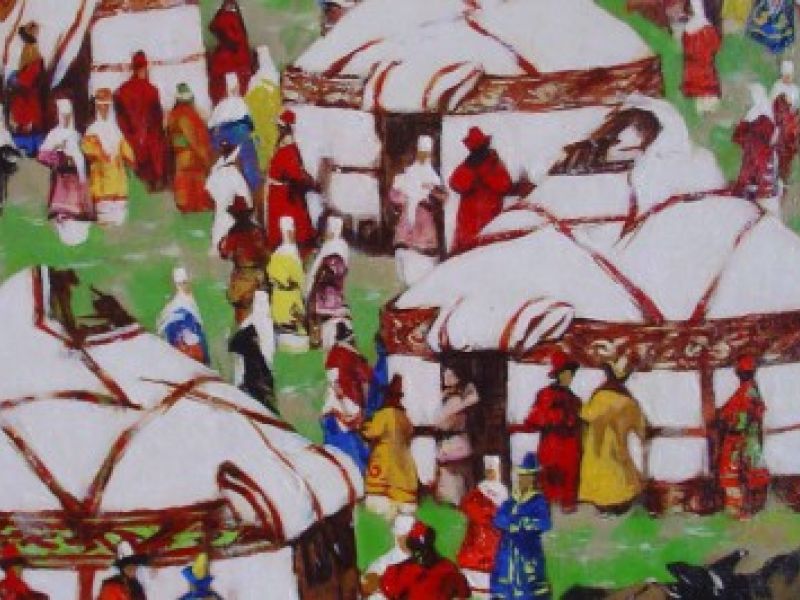 The yurt was of a special concern of the nomadic and semi-nomadic pastoralists, it was the most comfortable and practical accommodation adapted to the peculiarities of nature and life. All the achievements of domestic crafts are focused inside the yurt and in its decoration. As it was noted before, this mobile architectural type originates in round stationary dwellings (lean) made of wood and stone, known in Kazakhstan since the end of the Second millennium BC. (Settlements Bougoula, Shagalyly).

The earliest information about the collapsible housing came to us from the time of Herodotus. The centuries-old nomadic dwelling evolution has led to the development of clear proportions and the rules of installation and dismantling of yurts. The so-called Qypchaq type of yurt was the most common in Kazakhstan, it differed, from for example Kalmyk, because of its conical top and spherical dome.

The exterior and interior of the yurt were different, depending on its functionality. The largest and most luxurious were the ceremonial yurt (ak-ui, ak-horde-boz ui). Among the ceremonial structures were the yurts for guests (Konak-ui), and made ​​with a special grace and love the dwellings for newlyweds (otau-ui). On average, the Ceremonial yurt consisted of 18, and the biggest of 30 lattices (rope).For comparison, the walls (kerege) of ordinary living yurts were collected from six lattices.

In addition to the main living yurts and ceremonial structures, there were other types of prefabricated buildings, characterized by the simplicity of design and interior decoration, for example, the military yurts. The more spacious of them were called ab-laisha, and the smallest, consisting of three gratings, short dome rails (uuk) and miniature top circle (shanyrak) were called zholym-ui. Special yurts were also used for the kitchen and storerooms.