Genghis Khan and the Mongol conquests of Kazakhstan and Central Asia. The formation of the uluses 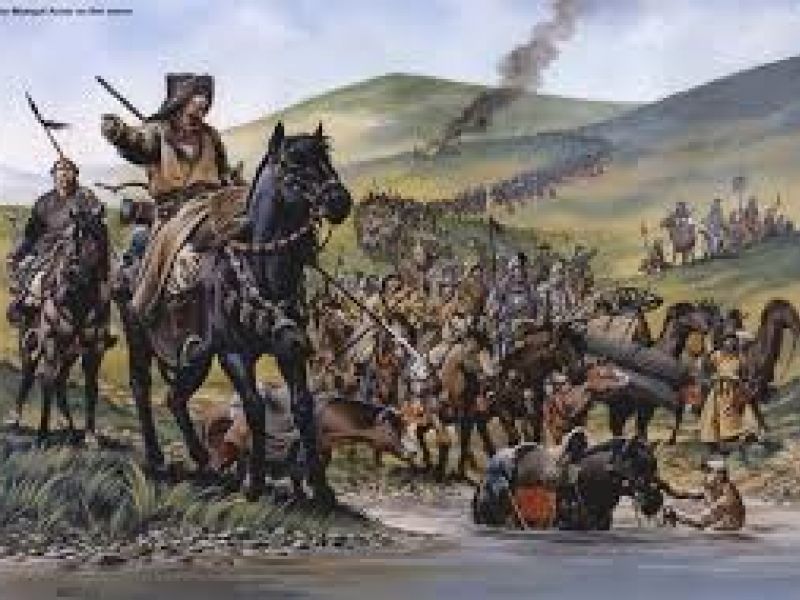 At the end of 12th - early 13th centuries the political situation in the steppes of Central Asia and Kazakhstan was represented by the growing struggle for power over other tribes between the rulers of the strong nomadic tribal alliances. In this struggle the member of one of the Mongolian tribes, Temujin (Genghis Khan) united many nomadic tribes of Central Asia, and became the most powerful conqueror in the Central Asian steppes. Temujin’s fame grew in the wars of the Kereit Khan against the Naimans, Mongol-speaking Tatar and Merkit tribes. The future Khan Genghis acted in these wars as a vassal of Wang Khan and took an active part in them.

In the spring of 1206 at the Onon River was a Kurultai of nomadic elite, supporters of Temujin. Under the waving white flag he was acknowledged as Great Khan of consolidated tribes and took the new title “Genghis Khan,” supplanted his name. He had no idea what heights he will reach in the campaigns against the West and the East, particularly, pursuing the Naimans and Merkits, again defeated by him in 1208 on the banks of the Irtysh.

Multilingual written sources indicate that the empire of Genghis Khan was largely founded on the basis of the Turkic tribes of Central Asia, part of which were the steppes of Kazakhstan.

Turkic traditions had an impact on the form of Mongolian statehood. The military-administrative system of the Golden Horde originated in the Turkic Khaganate was developed in the Naiman and Kereit uluses.

All the territory and the population were divided into three military administrative districts: the right wing - barungar, left wing - djungar and center - gol. Each county was divided into tumens, consisting of ten thousand men, thousands - of ten hundreds and hundreds - of ten dozen.

Under Genghis Khan and his successors a new civilian and military code of laws, called the Yassa or Jasag, was created. It was codified collection of principal law, satisfying the new socio-political relations in society. Genghis Khan appointed his harshest son Chagatai to oversee the execution of it. In the empire there were also the positions of the Chief Justice, or dzhargulugsan, and of judges - dzharguchi.

The Yassa of Genghis Khan consisted of two parts. The first part, Bilik, taught the statecraft, gave useful advises on governance. The second part was called Jasag and contained the criminal law and religious taboos. An important place in Jasag took rules of the military organization and discipline.

The state founded by Genghis Khan and his successors in the first half of the 13th century in short time became a world empire. It was represented by strong centralized power, unequal relations between the center and the border regions and the state ideology, which had three main pillars: the right of Genghis’s descendants to the throne, the need of consolidating of all the nomads and the need to unite all countries in the world under the authority of the nomads. However, the internal contradictions among the ruling elite and economic fragmentation of individual parts of the empire led to the isolation of the major uluses. The norms of the Yassa were used in creation of the Kazakh code of laws "Jeti Jargi." Many of the rules of social organization and forms of statehood were used in the states that appeared on the territory of Kazakhstan after the fall of the Mongol Empire.

The Merkits and Naimans were defeated by the Uyghur Idiqut (ruler) in 1209, while trying to cross his lands. The survivors of Naiman tribes were led by Kuchlug Khan into Semirechye in possessions of the Kara Khitans, and the Merkits fled to the Kipchaks in the steppes of central Kazakhstan.

For some time, local principalities of Semirechye and Eastern Turkistan recognized the sovereignty of the Kara Khitans, but at the turn of the 12-13th centuries became de facto independent. Therefore the Kara Khitan Gurkhan (ruler) wanted to use the Naiman soldiers to stifle the rebellious vassals. Kuchlug Khan gained the confidence of the Gurkhan and in 1210 seized power in the state, deposed the Gurkhan, but leaved him alive. Kuchlug intended to subjugate the Karluks, Kanglys and Uyghurs and began devastating attacks against them.

In this situation, the Karluk Khan Arslan, the ruler of Almalyk, and the Uyghur Idiqut Baurchuk Art Tekin had to seek help from the enemies of the Naimans, the Mongols of Genghis Khan. Written sources report about the obedience of these lords to Genghis Khan in 1211. The consequence of these events was the first appearance of Mongolian army in Semirechye.

In 1216 the Mongols resumed their movement to the west. Genghis Khan ordered his eldest son Jochi to pursue the Merkits fled to the Kipchaks, and one of his favorite generals Jebe Noyon to punish Kuchlug Khan. In 1218 Kuchlug Khan was defeated, and the Mongols entered his possessions in Semirechye.

Kuchlug fled again, but was overtaken by the Mongols in Badakhshan and beheaded. Earlier Jochi Khan met in combat with the Merkits in the Turgay steppes of Kazakhstan and defeated them. But the next morning he was attacked by 60000 army of Muhammad Khwarezm Shah. Muhammad was leading his army from Jend, near the lower reaches of the Syr Darya, against the Kipchak nomads. This accidental encounter made ​​a strong impression on the Khwarezm Shah. After that the Mongolian and Khwarezm relations become more strained and led to war. The formal reason was the so-called "Otrar catastrophe."

There appeared a lot of talk in Central Asia about the victories won by Genghis Khan. The Khwarezm Shah sent to Mongolia one after the other two embassies. Genghis Khan also sent an embassy. In the spring of 1218 Muhammad Khwarezm Shah met it.

After that Genghis Khan sent to the Central Asia a trade mission. There were 450 people in a caravan of 500 camels. Crowded caravan arrived in the summer of 1218 in Otrar. The governor of Otrar Ghaiyr Khan Inalchuq suspected the merchants to be spies, confiscated their goods and executed them. Genghis Khan demanded the extradition of Ghaiyr Khan, but the Khwarezm Shah not only refused, but ordered to kill the ambassadors. This was the reason for the war against the Khwarezm.

The exact number of troops mustered by the Mongols is not known, the likely number - 150,000 warriors with the allies, the Karluks of Semirechye and the Uyghurs of Eastern Turkistan.

The military campaign began in September 1219 on the banks of the Irtysh. When approaching Otrar, Genghis Khan left for its siege the troops under his sons Chagatai and Ogedei. Jochi Khan led his division to the lower reaches of the Syr Darya, to Yangikent and Jend cities. The third division went to conquer the cities in the upper reaches of the Syr Darya, and Genghis Khan with the main forces went to Bukhara.

The governor of Otrar, Ghaiyr Khan defended desperately. The siege of Otrar lasted almost five months. At the end of the fifth month of the heroic defense, Khwarezmian commander Karadza-Hadzhib with a ten thousand detachment surrendered to the Mongols, letting them into the city. However, Otrar still was not crushed. Ghaiyr Khan with a group of soldiers strengthened in the citadel for the taking of which the Mongols needed another month. When all the defenders perished, Otrar was taken in February 1220. Ghaiyr Khan was captured and executed.

The eldest Genghis’s son Jochi marched to Sygnak, the center of the Kipchaks of the Syr Darya. The Mongols besieged city during seven days and nights and finally took it by storm and killed all the people. Then the Mongol army moved to Ashnas. Despite the resistance, the city fell and many of its inhabitants were killed.

All these events took place in the winter 1219-1220 and in the spring 1220. Jochi Khan stayed in Jend in the Aral Sea region for the whole 1220. In 1221, he conquered Urgench near the Amu Darya. After that he led his army into the steppes of Kazakhstan to the north-east of the Aral Sea, where he met the resistance of the Kipchaks and defeated them.

In 1220 the generals Jebe Noyon and Subutai Noyon with a 30000 army marched from Northern Iran and invaded the Caucasus, defeated the Alans, Kipchaks and Russians on the Kalka River, ravaged southern Russian lands and across the steppes of modern Kazakhstan in 1224 returned to the horde of Genghis Khan on the Irtysh River. As a result of the Mongol invasion in 1219-1224 Kazakhstan and Central Asia became part of the empire of Genghis Khan.

The entire adult population of Mongolia was divided into tens, hundreds, thousands and tens of thousands. There was strictest discipline. According to the laws of Genghis Khan were punished by death: murder, adultery, polygamy, wife’s unfaithfulness, theft, robbery, buying stolen goods, concealing a runaway slave.

The Mongol military art reached the highest levels, especially, the siege warfare. Genghis’s son Tole during the siege of Nishabur used about 3000 ballista, 300 catapults, 700 machines for throwing pots of burning oil, 4000 assault ladders and 2500 packs of stones for throwing from ballista.

Genghis Khan divided his empire among his sons. The vast territory of Kazakhstan was divided between his three eldest sons. Large territory west of the Irtysh River, covering the northern part of Semirechye and the entire Central, Northern and Western Kazakhstan including the lower Volga was part of the Jochi Ulus. South and South-East Kazakhstan, that is a big part of Semirechye, was part of the Chagatai ulus, and the north-eastern Kazakhstan was given to Ogedei.

The Mongol conquest of Kazakhstan made significant changes in the balance of ethnic groups on the territory of Kazakhstan. It led to significant movement of the tribes. Russian researcher V.V Barthold said that the Mongol conquest contributed to the growth of the political influence of the Turkic-speaking tribes and establishment of their authority in the steppes of Eurasia.