Declaration of the state independence 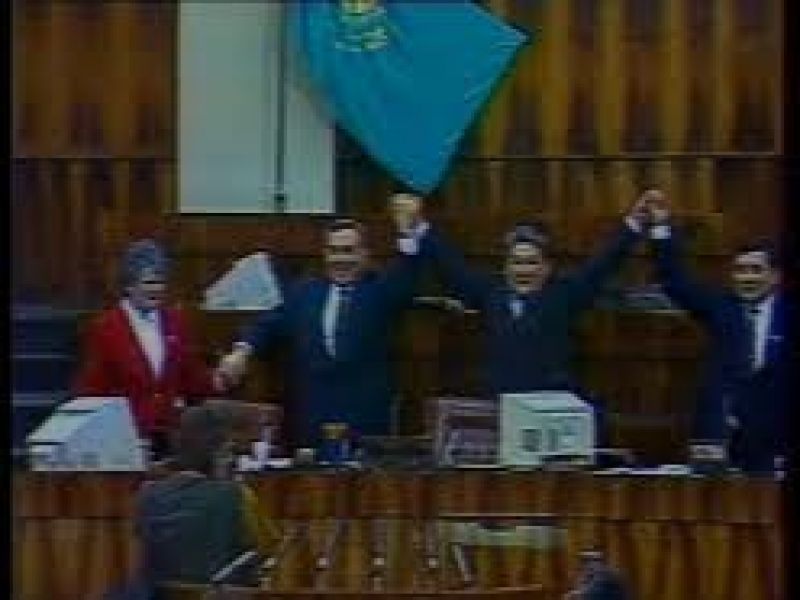 At the beginning of December, 1991 leaders of three republics: Russia - B. Yeltsin, Ukraine L.Kravchuk and Belarus – S. Shushkevich signed the Belovezhsky agreement on denunciation of the allied contract of 1922. Actually disintegration of the USSR was legally issued.

Process of the birth of the new state began.

The Constitutional Law "About the State Independence of the Republic of Kazakhstan" of December 16, 1991 became a special stage of this process. Developing key ideas of the Declaration on the state sovereignty, the Constitutional Law unambiguously fixed that the Republic of Kazakhstan from now on builds the relationship with all states on the principles of international law, as well as it befits the independent state. For the first time uniform Kazakhstan nationality was established. The variety of forms of ownership proclaimed the Declaration, the principle of division of the government on legislative, executive and judicial was legalized, the state course on independent economic system with the financial credit, tax and customs policy was fixed.

At an Ashkhabad meeting leaders of the republics of Central Asia and Kazakhstan, analysed the Belovezhsky agreement, legal aspects of a problem and expressed readiness for participation in formation of the new state. On December 21, 1991 in Alma-Ata at meeting of 11 independent states  heads which were a part of the former Union, the protocol of the agreement on creation of the Union of the Independent States (UIS) was signed.

In the political sphere it was headed for formation of the strong presidential republic with the subsequent reform of the parliamentary power assuming the professional Supreme Council. Discussion of the draft of the new Constitution of the republic, reform of executive power is carried out. For a transition period positions of heads of administrations to whom all completeness of responsibility for state of the economy, implementation of presidential and governmental decisions on places is assigned are entered.