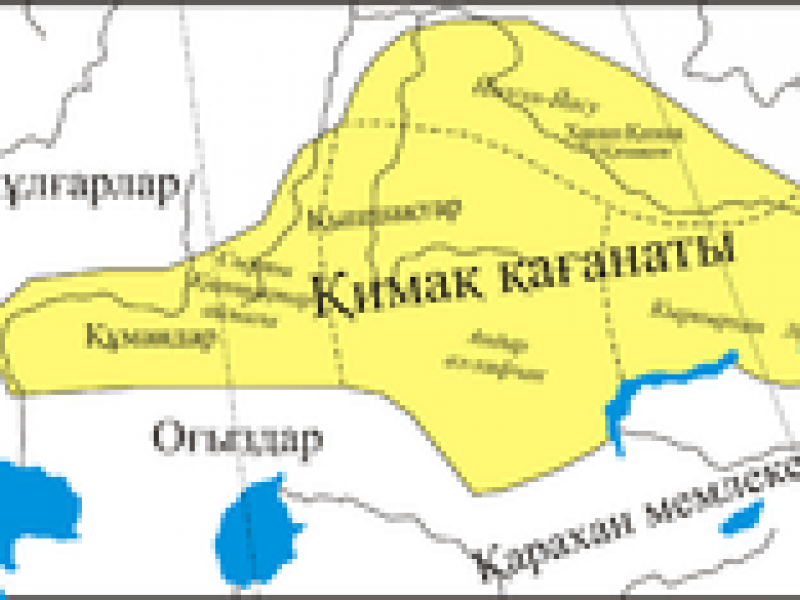 Early history of the Kimeks was closely intertwined with the Yanmo tribe, mentioned in Chinese sources in connection with the events of the 7th century. Sinologists identify the Yanmo tribes with the Yemek (Imek) tribe. The word “Imek”, according to the orientalists, is a kind of phonetic name of the Kimeks. The assumption of the identity of Kimek and Kipchak tribes is erroneous, because the written medieval sources mentioned them to be two separate but related Turkic-speaking ethnic groups. The Yanmo tribe was one of the Tele tribes, lived in the north-western Mongolia at the beginning of 7th century. By the middle of the 7th century the Imeks (Kimeks) had migrated to areas north of the Altai Mountains and to the Irtysh region. The isolation of the tribe occurred after the fall of the Western Turkic Khaganate in 656. It was the time of forming of the Kimek tribal alliance. The head of the Kimek tribe had the title "Shad Tutuk."

In the second half of the 8th – early 9th centuries the Kimek tribes started moving in three directions: to the north-west towards the South Urals (mostly the Kipchaks), to the south-west to the Syr Darya basin and Southern Kazakhstan, and to the south into the north-eastern Semirechye. In 766-840 the Kimeks occupied the territory of Western Altai, Tarbagatai and Alakol valley, reaching the northern limits of Tokuz - Oghuz tribes, who lived in East Turkestan. The boundary between them ran along the Djungar ridge.

According to historical sources the Kimeks were one of the main Turkic tribes. The ethnonym "Kimek" was mentioned in written sources dating from the 8th century. The Arab geographer Ibn Khordadbeh (9th century) noted the Kimeks in the list of politically and socially important Turkic tribes.

Persian historian of the 9th century Gardizi wrote about the Kimeks. His work is the only source retained the legend of the Kimek origin, albeit in an incomplete and distorted form. According to this legend, the Kimeks descended from the Tartars. The Kipchaks and Bayandurs also were their relatives. The entry of the Tatars in the Kimek tribal alliance was in the middle of the 9th century. Evidently, the legend of the Kimek origin appeared as the result of the ethno-political and ethno-cultural relations between the Kimek, Kipchak and Tatar tribes.

After the collapse of the Uighur Khanate in 840 in Central Mongolia part of its tribes joined the Kimek alliance. The Kimek confederation consisted of seven tribes: Eymur, Imek, Kipchak, Tatar, Bayandur, Lanikaz and Ajlad. The head of the Kimek alliance adopted the title of Baigu (Yabgu). The ruling elite of various Turkic peoples (Karluks, Oghuz, Uighurs, etc) had the same title.

The Kimek tribal confederation was a multi-ethnic state, consisted of Turkic-speaking tribes and Turkified groups of Tatars, who (Tokuz -Tatars) had close political and cultural ties with Central Asian Tokuz - Oghuz tribes. The Kimek tribal alliance was not based on blood ties. It was based on territorial and administrative relations. The Kimek tribes were interconnected with hierarchical and vassal relations.

At the beginning of the 9th century the Kimeks moved to the Syr Darya. In alliance with the Karluks they helped the Oghuz tribes to defeat and drive out the Kangar and Pecheneg tribes from the Syr Darya and Aral Sea.

In the second half of the 8th – early 9th centuries the Kimek tribes consolidated in the territory from the Middle Irtysh to the Zhungarian Gate and extended their territory as far west as Southern Urals and the Syr Darya basin. These tumultuous events led to the Kimek state formation. The first mention of the Kimek state appeared in the Arab historical and geographical writings of the late 9th – early 10th centuries, belonged to al-Ya’qubi (9th century).

The power of the Kimek ruler was significant. Since the establishing of the Kimek Khaganate in the late 9th - early 10th centuries, the King adopted the Turkic title of Khagan.

Thus, during the social and political development of the Kimek society from the tribal alliance to the state, the titles of the rulers gradually changed from the title of Shad Tutuk to the Khagan. During the formation of the Kimek state changed the composition of the Kimek tribes. According to "Hudud al-‘Alam" and al- Idrisi, the Kimek Khaganate consisted of 12 tribes.

The Kimek Khagan had real power. Within the state he designated members of the tribal nobility to be the local rulers. Hereditary transfer of power took place not only in Khagan family, but also among the tribal nobility. The possessions of 11 Khagan governors were inherited by their children.

The origin of tribal ulus system was the result of major changes in the social order caused by the forming of patriarchal and feudal relations in the Kimek society. The local rulers were under the rule of the Kimek Khagan. They attempted to consolidate their individual nomadic economy. Some of them turned into semi-dependent Khans and wanted to seize the supreme power in the state.

The existence of tax system in the Kimek state can be supposed from the fact, that the king took mandatory share from the gold, collected by the Turks along the shoreline of the Kimek sea, and the remainder was given to the owner.

The Arab traveler Abu Dulaf (10th c.) wrote about the existence of writing: "The have reeds with which they write." In seems that the Kimeks wrote with reed pens and used ancient Turkic alphabet. Archeologists found 9th to 10th century bronze mirrors with inscriptions near Urdjar in the Tarbagatai Mountains, and in the Irtysh region.

In 9th - early 11th centuries the Kimeks had ancient Turkic religious beliefs. The most important among them were the cult of Tengri and the cult of the ancestors. Some groups worshiped fire, the sun, the stars, the river and the mountains. A common form of religion was shamanism, but some groups of Kimeks professed Manichaeism - the religion of the Christian persuasion. Perhaps Islam was spread among the Kimek nobility.

In social and cultural terms the Kimeks inherited and developed the traditions found in the ancient Turkic environment of the 6-9th centuries. In the late 9th – early 11th centuries they had the early feudal political system.

The Kimek rulers organized ​​successful campaigns to the south. They conquered part of the land of the Tokuz - Oghuz tribes, raided their towns in East Turkestan. The Kimek Khagan invaded the country of the Yenisei Kyrgyz. The neighboring dynasties and nations also attacked the Kimek settlements. For example, the Kara Khanids organized military campaigns into the Kimek lands and sometimes reached the Irtysh River.

At the beginning of the 10th century the boundaries of the Kimek state became stabilized. Mutual military raids of Kimeks and their neighbors were replaced by peaceful relations.

At the beginning of the 11th century the Kimek Khanate fell. It was caused by two factors: the intentions of the Kipchak Khans to self-determinate, the internecine strife in the Khanate, and the migration of nomadic tribes of Central Asia, the relocation of which started at the beginning of 11th century.