Participation of the population of edge in the Russian revolution of 1905-1907. 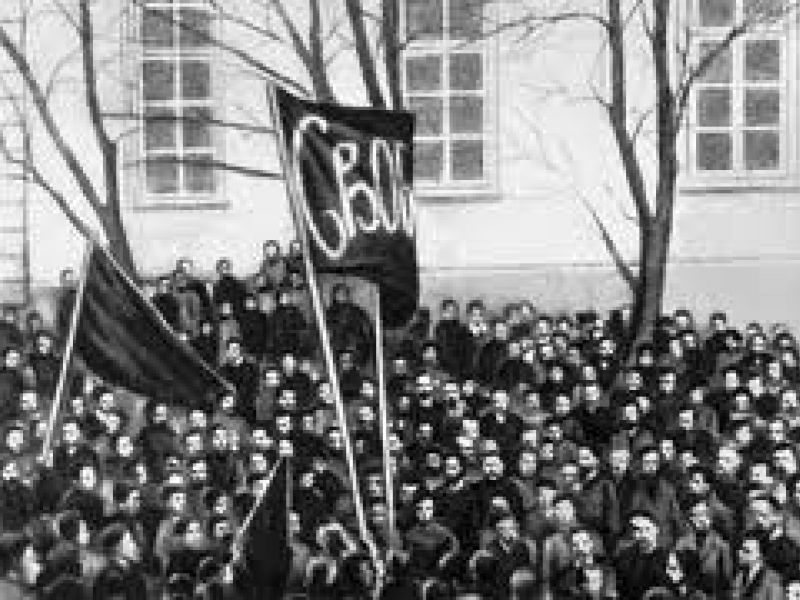 The first bourgeois-democratic revolution in Russia gave an impetus to political awakening of workers of Kazakhstan, development in the region national liberation, working, agrarian and other forms of movement against colonial, social and other types of oppression. The relation of various segments of the population of edge to events of 1905 — 1907 in Russia was ambiguous. Because of low level of economic, social and political development of edge in comparison with others the labor movement which has woken up at years of revolution on qualitatively new step slightly more widely developed. Industrial and city workers took active part in it. Agrarian movement was presented generally by labor layers of the Kazakh aul, the resettlement village and the Cossack villages. National liberation movement united various layers of the Kazakh aul, beginning from broad masses of indigenous people in the person of agricultural farm laborers and the poor to the arising bourgeoisie, the national intellectuals, feudal circles and Muslim clergy.

Labor movement in Kazakhstan in 1905 — 1907 entered a new stage of the development. These years there was a number of large political and economic speeches of the workers who have been closely connected with the general course of revolutionary processes in Russia: strikes on Uspensky copper mine in December, 1905, Spassky copper-smelting plant, in Karaganda копях and on Uspensky mine in June, 1907, at the enterprises of Semipalatinsk, Uralsk, Aktyubinsk, True, Kustanai and other cities.

The greatest scope of a strike and strike of workers in Kazakhstan received on railway transport. In the years of revolution on edge lines movement of trains repeatedly stopped, railroad workers attendance order entered the 8-hour working day, achieved a string of concessions from administration, created labor unions, took control of stations, sites, and sometimes the whole roads; organized fighting teams etc. The revolutions which have arisen in the period of the highest lifting in October-December, 1905 railway committees of Perovsk, Petropavlovsk, Uralsk and other stations of edge, on an equal basis with Councils of working deputies "actually were rudiments of new revolutionary power" 13.

The first Russian revolution of 1905 — 1907 promoted emergence in the region of the first groups and the RSDRP organizations. The big role in it was played by the Siberian, Astrakhan, Samara, Saratov RSDRP committees operating in close proximity to Kazakhstan. "The Siberian social democratic Union", arisen in 1904, in particular its Omsk organization which carried out big propaganda activities and among workers, first of all workers of Petropavlovsk, Kokchetav and other northeast regions of Kazakhstan, and also Semirechya had special value.

The circle in Atbasara, organized by the exiled working A.D. Ushakov from Ural in 1896 was the first Marxist circle of self-education in Kazakhstan. At the beginning of the XX century Marxist circles arose in Akmolinsk, Petropavlovsk, Uralsk, Kustanai, Semipalatinsk, True and other cities края14.

Gradually Marxist circles of Kazakhstan from studying and promotion of revolutionary ideas passed to political propaganda and practical performances. In the first months of revolution on bazerany existing Marxist circles the RSDRP organizations in Perovsk and Uralsk, social democratic groups in Petropavlovsk, Kazalinsk and Turkestan, and a little later in Akmolinsk, Kokchetav, Aktyubinsk, Pavlodar and other cities of edge were issued. In 1906 the RSDRP organization and in Semipalatinsk was issued.

The beginning of trade-union movement is connected with events of revolution of 1905 — 1907 in the region also. One of the first created labor union of railroad workers in Uralsk (November, 1905) at the head of which stood N. Smurov (subsequently one of commanders of the Chapayevsky division), N.A.Pokatilov and N.I.Ulyanov. In Uralsk a number of the trade-union organizations among which the most solid and fighting a post railway was the labor union of typographical workers worked also.

The labor union of railroad workers of the Orenburg-sko-Tashkent railroad which in 1906 united 6 thousand people, i.e. 40,8% of all workers and employees of the line was the largest.

The Russian-Kyrgyz union on Uspensky mine was Svoyebrazna the trade-union organization of miners of Kazakhstan. As a whole across Kazakhstan, by approximate calculations, in the years of the first Russian revolution 20 — 25 labor unions of workers and the employees uniting only 3,5% from their total number worked.

It says not only about weakness of labor movement in the region that was caused by small number of local workers, their low concentration on the enterprises and seasonality of a production activity, but also about social and economic backwardness of edge where overwhelming part of the population made Kazakh шаруа and the resettlement peasantry.

Agrarian movement in Kazakhstan, had some development in the conditions of the first bourgeois-democratic revolution, as a whole remained weak and wasn't beyond separate separate krestyanskikhvystupleniye. These spontaneous acts of a protest against an arbitrariness of fights — feudal lords and representatives of colonial bodies were generally limited to beating of owners, authorities, refusal of payment of taxes and performance of duties, stealing of their cattle, potravy crops etc. So, for example, Kazakh шаруа from the Arganatinsky volost of the Lepsinsky district of Semirechensky area in number of 200 people at the beginning of 1905 killed the volost governor, beat policemen accompanying it and fights. In the summer of 1905 there were excitements of the Kazakh poor in Semipalatinsk, Tur-gaysky, Ural and Syr-Daryinsky areas.

In November, 1905 in many Kazakh auls there were populous meetings at which provisions of the imperial manifesto and needs шаруа were discussed on October 17. Populous demonstration took place on November 15, 1905 in Karkaralinsk in which together with workers, peasants immigrants and soldiers the big group of riding Kazakh Dzhigits of auls and volosts of this district participated.

Country performances happened and in the Uigur and dungansky kishlaks of Semirechya which poor protested against capture by large feudal lords of communal land tenure, and такжепротив imperial officials. Excitements took place and among the Russian peasants who have recently moved from the central provinces, the poorest part of the Cossacks and soldiers of separate garrisons.

In fight Kazakh шаруа against social oppression the important place was taken by petitsionny campaign, i.e. submission of complaints and applications in higher governmental instances up to the tsar — "акпадши". These petitions, numerous and various as according to the contents, and by origin, not only characterize still the belief which has remained at the Kazakh peasants in justice of the tsar, but are a peculiar form of a protest against an arbitrariness expressed in withdrawal at indigenous people of fertile lands, pastures and meadows, against excessive taxes, duties and other abuses. Especially it should be noted the address of the Kazakh peasants to the Russian people "From the Kyrgyz — to Russian" which in February, 1907 was published in newspapers "Orenburgsky Kray", "Uralsky dnevnik" (in the Tatar language in Orenburg). In it banefulness of colonizer policy of tsarism not only for the Kazakh population, but also for all labor Russia was emphasized. This address shows political awakening Kazakh шаруа, their aspiration to joint with the Russian workers and peasants to fight against oppression.

In development of labor and agrarian movement in Kazakhstan, liberating fight in the region as a whole a certain role was played by the narrow intellectual layer which has arisen at a boundary of the XIX—XX centuries. On the structure and the directions, nature of political activity it united various groups, but its main part representatives of colonial administration, including doctors, teachers made, lawyers, etc. It were natives of noblemen, the raznochinny environment and the lower class. The majority took them pro-governmental, imperial positions, but political exiled among whom there were many social revolutionary, social democrats and other revolutionary elements, took especially active part in performances of city workers of edge. In many cities there were organizations as revolutionary and liberal and democratic (cadets, oktyabrist etc.), and chernosotenny parties.

It is especially important to note value of the Kazakh intellectuals in national liberation movement which closely intertwined with fight of the Kazakh population for the fair solution of an agrarian question in the region. Ranks of local intellectuals differed on the views and actions. Some of them, generally natives of bottoms, adhered to socialist ideas, cooperated with social democrats, members of Just Russia. So, for example, Mohammed-Maksut Hamidullin-Bekmetov — the telegraph operator of Omsk post and cable office, the native of Karkaralinsk, supporting close contact with the fellow countrymen, in particular on the eve of and during the All-Russian political strike in October, 1905, was engaged in promotion of revolutionary ideas in Northern Kazakhstan.

Another, more considerable not only on number, but also on influence, part of the Kazakh intellectuals stood on liberal and democratic positions. It were generally a predstavitelifeodalno-aristocratic top of the steppe — A.Bukeykhanov, B. Karatayev, etc. though among them there were also natives of averages and the lower class of an aul (A.Baytursynov, etc.) . They in December, 1905 in Uralsk carried out congress of delegates of the Kazakh population of five areas and tried to create the party — branch of constitutional democratic party of Russia which had to defend national interests of Kazakhs. In February, 1906 in Semipalatinsk the second congress of Kazakhs which approved the program close to cadets took place, but included in it requirements about the resettlement termination to the region of peasants, recognitions of all lands of Kazakhstan by property of indigenous people, opening of schools etc. They supported a freedom of worship, development of national culture, distribution of the Kazakh language on an equal basis with other languages in Kazakhstan.

National liberation movement of Kazakhs these years accepted also forms of religious fight during which demands of the organization of special Muslim spiritual management, constructions of mosques, opening of spiritual schools, Islam teaching at schools in the Kazakh language, issues of international passports for pilgrimage to Mecca etc. were made.

In the II State Duma deputies from the Kazakh population adjoined cadets and entered into Muslim fraction, sovmes-gno with others "националами" Russia achieved the termination of resettlement of peasants on suburbs.

Thus, events in Kazakhstan in the years of the first Russian revolution of 1905 — 1907, in particular speech of workers, peasants and the intellectuals, national liberation movement etc., despite their weakness and separation, became political school for the local workers which experience by them was made use in further fight for national and social release.