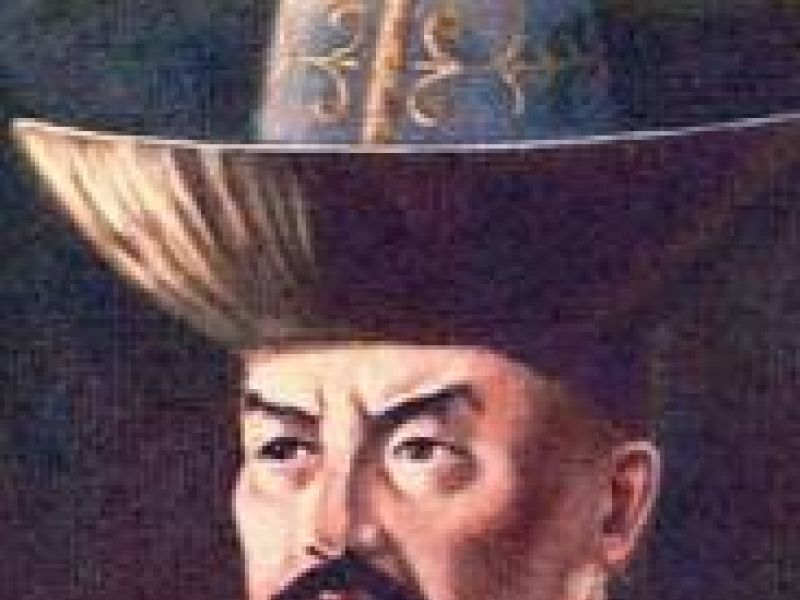 In seven years after suppression of Country war of 1773-1775 under leadership E.I.Pugacheva in whom Kazakhs took active part, in Younger zhuz in 1783 revolt sharua again flashed. At the head of the risen I rose, the foreman of a sort Srym Datov.

This movement had anti-feudal and anti-colonial character, was continuation of country war 1773-1775 yy.,  after which Kazakhs managed to solve, though partially, a land and water problem. Decree on November 7, 1775. The board of foreign affairs allowed Kazakhs to use in winter time of a pasture to Entre Rios of the Urals and Volga, on the bank of the Caspian Sea, on the right coast of the Irtysh Rivers, Ural, near the rivers Emba, Sagyz. But concessions of the imperial government were compelled and in process of strengthening of positions in the region it sought to liquidate them or to limit. Actively expansion of land and water laws of Kazakhs was opposed by the Ural Cossack army. On December 27, 1782 the government decree about permission of a winter stage of cattle to the above areas only on condition of hiring of Kazakhs lands followed. The Ural Cossacks used this decree in own favor, having forbidden delivery of the Cossack lands in employment to Kazakhs. The cordon guards on the Ural line of strengthenings were strengthened, besides except a payment Kazakhs had to leave amanats — hostages.

Further disintegration of the vassal relations in Younger and Average shoes was an important consequence of participation of Kazakhs in country war Pugachev. So, in Younger zhuz Nurala's khan and sultans gradually departed from risen and took a position of support of the imperial government. Mistrust and hostility to revolt among the Kazakh aristocracy that strengthened feudal dissociation grew. The different relation of the Kazakh aristocracy and nobility to revolt of Pugachev led to a rupture of the union of the aristocracy and patrimonial foremen in the 80s of the XVIII century and to crisis of the hansky power at the end of 70 — the 90s of the XVIII century. Gradually influence of Nuraly khan in Younger zhuz fell that led it to political isolation and, to new performance of a people at large and the first attempt of liquidation of the khan power in Younger zhuz

Attacks of Kazakhs to the Ural line of strengthenings began on spring of 1783. The Kazakh group led by foremen Tashbulat and Erbulat attacked the Giryalsk redoubt, took prisoner of soldiers and stole cattle. To the northeast from Orenburg groups under Kadyr and Sadyr's leadership — foremen from Tamm's family worked. They prepared for attack on the Krasnogorsk fortress and the Tatar settlement.

The Orenburg commandant Ladymensky sent to the steppe retaliatory groups from the Orenburg Cossacks and group from the 1500th Bashkir under team of a sotnik Kharitonov. The Kazakh groups showed to group of Kharitonov persistent resistance, but the stone strengthening built by Kazakhs was taken by storm. The captured 56 people were sent to state works.

In the summer attack of Kazakhs on strengthenings and trade caravans that brought into decline trade with the Central Asian khanates became frequent. Attack on Kargaysky fortress was made, movement on a path between Orenburg and Iletsk Protection was supervised. Actions around Orsk fortress on Nizhneural distance were especially active. At the head of Kazakhs from a sort there was foreman Dulat. But while it were the separate performances which didn't have the uniting center. At this time at the head of national movement there is Srym Datov — the foreman of a family of Baybakta. The first data on Srym Datov are provided in the Russian sources during movement of E. I.Pugachev. There is a message of the Ural Cossack F.Kuritsyn that S. Datov in 1774 headed the Kazakh group in army of E.I.Pugachev. A.S. Suvorov's report to column P. I.Panin of June 22, 1775 in which he reports about S. Datov as one of active participants of revolt E.I.Pugachev remained. But since the fall of 1776 with Datov departed from movement and I went over to imperial administration. Only since 1783 it adjoins again insurgents, combats the Ural Cossack army. In December, 1782 S. Datov was captured near the Topolikhinsk outpost by the Ural Cossacks, spring of 1784 — redeemed from captivity by Nurala's married to the his sister khan. The sum of repayment included 70 horses and 350 rub money. Since May, 1784 S. Datov conducted fierce fight against the Ural Cossacks. The Kazakh groups worked near the Nizhneural line, at Orsk fortress. In November in S. Datov's group were 1000 Kazakhs . During this period S. Datov departed from Nuraly khan.