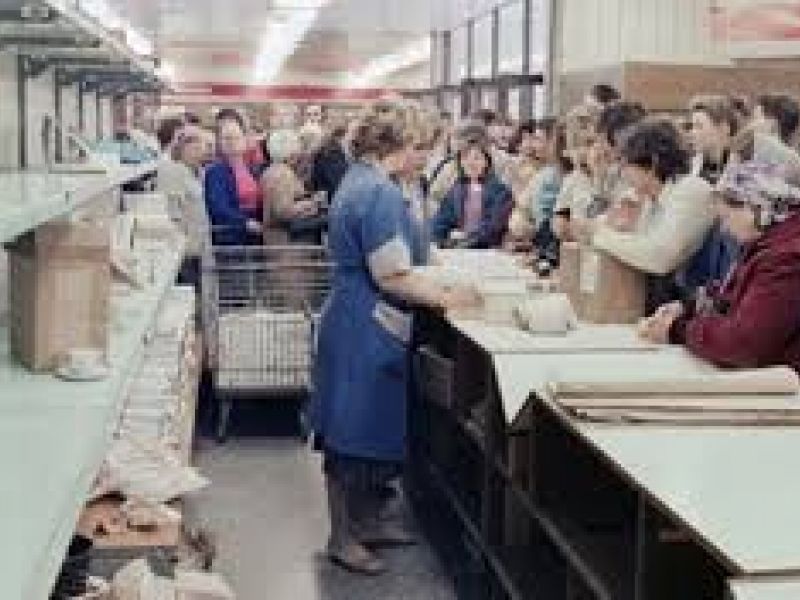 Still in the mid-sixties the party and state country leaders headed for increase of the monetary income of the population. It played a certain positive role in increase of a standard of living of the population in comparison with 40 — the 50th. In the first half of the 70th in production branches of a national economy new rates and salaries were established, the minimum of a salary is brought to 70 rub a month. In 1977 — 1978 new rates and salaries for workers of the non-productive sphere were entered. If in 1965 only 4% of the population had the income of 100 rub and having embroidered month on the family member, in 1977 of nearly 40%. As a whole the size of an average monthly salary of workers and employees of the republic for 1971 — 1989 increased by 89% — with 123,7 to 233,7 rub, workers have industries — respectively for 93,6% with 133,9 to 259,3 rub. Significantly the salary at employees of state farms — with 121 to 247 rub changed. The guaranteed salary of collective farmers (100 and 210 rub) increased, salaries of low-paid segments of the population were tightened for payment the average paid. The average monthly pension on age rose to 93,2 rub a month instead of 51,1 rub.

Such growth of a salary by years was given for constantly growing standard of living of the people, but actually it was true a little. Such factors as rise in prices by the state and the enterprises monopolists, decrease in quality of goods, the deficiency growth, artificially underestimated size of a salary, equalization in payment conducted to stagnation of a standard of living of the population. The share of a salary in the made net production in the country industry constantly decreased, having made in 1985 36% against 58% in 1927.

Inflationary processes, long time affected fall of the real income of the population disappearing government bodies from the people also. Taking into account annual rate of inflation of 4% (according to scientists) the average real wage during 1970 — 1986 decreased by 20%. In 1985 the ruble equaled 54 kopeks in comparison with ruble of the middle of the 60th. At Kpssrukovodstvo's XXV congress of party it was compelled to recognize that in the itself growth of the monetary income yet doesn't mean real lifting of a standard of living.

A little providing the population at the expense of public funds of consumption improved during the considered period. Their considerable part went on payment of grants, pensions and grants, receiving free education, on development of health care, cultural and consumer services. In 1971 for collective farmers the same order of charge of pensions as for workers and employees In 1972 — 1974 the sizes of pensions on the average were increased by 33% for disabled veterans and work was established, in 1975 — side benefits to disabled people of Patriotic war are entered. Measures for motherhood and childhood protection were taken, material living conditions of participants of Patriotic war are improved, grants to disabled people since the childhood are increased. However the specified measures affected increase of a standard of living a little.

The increase in the nominal size of pensions, grants was insignificant, and level from which there was an increase — low. At considerable part of the population, especially pensioners, large families, the income remained low and didn't provide quite often even a living wage. Essential повышениецен in 70 — the 80th both official, and hidden on many goods of mass demand, household and the utilities, many means of transport considerably lowered the real income of the population.

Deficiency increased. From sale cheap goods for children, people of advanced age disappeared, there were no many food products. Quality of food worsened that at the same time meant their rise in price. Hours-long turns, indispensable attribute of the Soviet system became habitual.

In 70 — the 80th the majority of people perceived the Soviet society as the extremely unfair. It was connected first of all with privileges of the party and state, military, economic nomenclature. Such privileges created a specific form of a social inequality and, in essence, meant formation of the consumer markets with the different purchasing cost of ruble. The bureaucracy strictly observed the hierarchical principle in distribution of privileges. Their volume was defined by the official status.

One of the most acute problems of the social sphere there was a housing problem. During the considered period there were some shifts in its decision. 2208,7 thousand apartments were constructed, about 13 million people improved the living conditions, having received new, having constructed own apartments or having expanded the жилплощадь17.

However in connection with population growth security with housing was incomplete. Capital investments in construction of housing were reduced, the number of the constructed apartments was respectively reduced, housing projects weren't carried out. Only in the eleventh five-years period in the republic nearly 1,2 mln sq.m of housing weren't entered, plans on construction of schools, hospitals, kindergartens aren't executed. At the same time in the 70th — the beginning of the 80th in the capital of the republic and the regional centers expensive administrative objects were under construction.

Submission of economy of the republic to the central departments, underestimation of problems of the welfare sphere, action of the residual principle of allocation of resources on its development conducted to that on many indicators defining a standard of living of the people, Kazakhstan lagged behind all-union indicators. The declared provision on alignment of levels of development of federal republics in 70 — the 80th гт. didn't occur. Many regions of Kazakhstan first of all located in an area of coverage of the Semipalatinsk nuclear range, Priaralya, were in a distress. Tens remote rural areas occupied by mainly indigenous people, weren't provided with normal medical care, drinking water, vegetables, fruit, in them there were no child care facilities, libraries and so forth. Such situation created an objective basis for a sharp aggravation of contradictions between the republic and the center.

Considering dynamics of a standard of living of the population of the republic in 70 — the 80th in comparison with the post-war period, it is necessary to recognize that the provision of the main part of the population improved. In the majority of families there were TVs, refrigerators, washing machines, furniture sets, other goods of long using. Almost barracks — characteristic attribute of pre-war and post-war life disappeared, the number living in communal flats was reduced. More and more people began to make trips abroad and about the country, were treated in sanatoria, had a rest in rest houses according to preferential permits.

However problems in the social sphere accrued quicker, than decided, the residual principle of its financing conducted to lag as medical care, preschool education, education. Situation in rural areas was especially unsuccessful. Construction of housing, cultural and community objects, services sector development more and more lagged behind needs of the population, causing his reasonable discontent. Deficiency of the food and qualitative industrial goods amplified, average life expectancy was reduced. Indifference to work, plunders on production, falling of labor discipline, alcoholism, crime became the mass phenomenon, "shadow economy" developed. All this testified to crisis existence in the social sphere and objectively conducted to blasting a totalitarian mode.

Command management system destruction, formation of the market relations didn't result in social justice, it is rather on the contrary. It not only didn't increase, but almost to the ground is razed. There was an aggravation of social contradictions. The economy was destroyed. Production doesn't grow, and decreases, and labor productivity and a consumption level respectively falls. Social justice developed into a problem of social protection of such groups, as children, pensioners, disabled people, large families. Equalization in compensation disappeared, but payment is far from justice. New forms of managing — in a row, rent, cooperation, the joint venture, private enterprise, commercial banks, joint-stock companies and other — create for the people occupied in these forms, unfairly high earnings. Big unearned fortunes are made by members of trade and purchasing cooperatives. Speculation and the black market developed in unprecedented scales. Social differentiation even more amplified. Income of the majority of people became below a consumer minimum. The inflation development, the begun unemployment deprive of people of any hopes of the future, negatively affect financial position of the population.