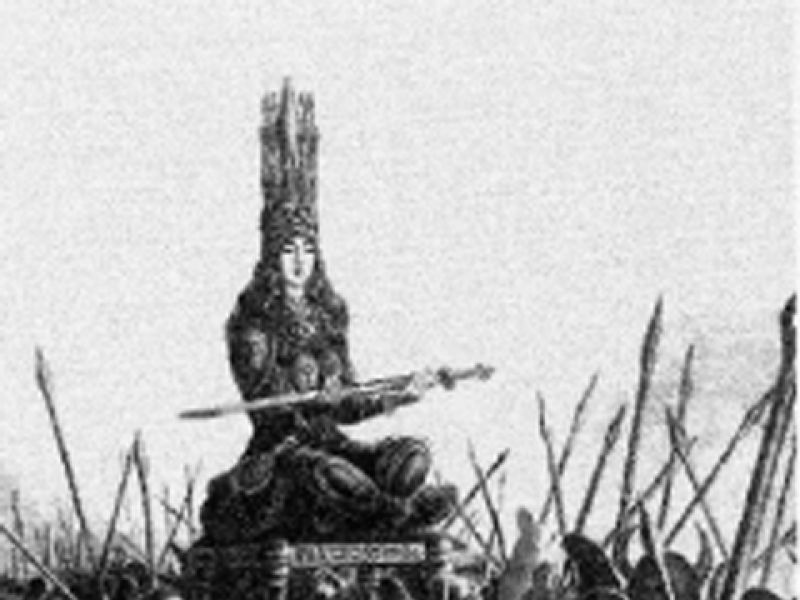 Researchers of Saksky art believe that it was closely related to the art of the Achaemenid Iran and Bactria, on the one hand, and the arts of China, Zhou and Han era - with the other.

In science, there are a variety of assumptions regarding the place and time of formation of the Saksky art " animal style ."

Excavations in recent years in exile Baba -jan and the sanctuary of Surkh -Dum have given new samples luristansk bronze : bronze pin with a figure of a crouching panther grindstone with a handle in the form of a ram's head , stylized eagle heads , figures of predators , deer in the " flying gallop " , horses and camels. However, as the researchers believe, Saka art cannot be reduced to luristansk - two independent artistic style.

Rather, at the beginning of the I millennium BC on the territory of present-day Iran began to penetrate Iranian-speaking tribes , under whose influence has spread a number of practices , new types of weapons and horse gear . Together with the Iranians and new subjects in art.

At the same time, the Iranians , having become acquainted with the culture of Assyria, Elam , Urartu , perceived achievements of their civilization . They Iranians borrowed some features of composition and style. It happened the art of the Achaemenid Iran, which has had a profound effect on the art of Saks . A Saks introduced to the art of these countries during his Scythian campaigns . After the defeat of the kingdom of the Median king Cyaxares , returned home and took with them many samples of fine art.

During the excavation Arzhan in Tuva - huge structure with a diameter of 120 m and a height of 3 m, under the mound, archaeologists found a complex wooden structures : In the center was a huge frame of larch logs the size of 8 x 8 m, within which was another frame size 4.4 x 3.7 m in it in a wooden deck was buried in chief, and next to lay the remains of a few men - relatives and associates of the leader, apparently willingly followed him to the other world . Around the radius were placed cabins, in which 160 horses were buried in ceremonial gear. The remains of many more horses have been found in tombs of the ring , outside of the mound. All the horses were light and a red suit, ie color of kings and priests.

Mound was robbed in antiquity, but a lot and got to share the archaeologists : the world's largest bronze plaque in the form of a coiled panther in the ring or , more likely, leopard , mountain sheep figurines , a dagger with a handle in the form of a boar figurines , gold torque , arrowheads . Dates back to the mound VIII. , And found in it Saki art objects are the most ancient . This suggests that the Saki animal style appeared in the Asian steppes. This is all the more real to him that there are roots. In Bronze Age local craftsmen produced figures of animals . Known cave paintings depicting deer, bulls. Also at the end of II - early I millennium  BC. Art was formed , which, however, has not been " animal style ."

The art of "animal style" was formed under the influence of the Southern traditions with which Saks met while hiking in the Near East and Iran. It was then came here to the Saks images of a lion, the lion - griffin, " the tree of life." These images were entered in the number of native animals , which included deer, sheep, camels , snow leopard , tiger , eagle . All of the images were not only ornaments , Saks invested in them certain content .

Jeweler's art reached a high level of perfection at Saks . Master artists were familiar with casting , stamping gold and could make the amazing grace , composite construction made ​​of gold, silver, turquoise , that graced the man and his clothing, harness horse, household items. This mane, decorated with animal faces , rings, pendants, earrings with garnet and turquoise inlaid with gold belt buckles , badges , patches on clothes .

Saki jewelry art most fully represented in the Issyk barrow , on the materials of which managed to get the idea of ​​the noble Saks clothing , jewelry they wore , weapons , with which they went into battle .

In the art of jewelry is widely used method of lining with gold leaf decorations and figurines carved from wood. The fact that the processing of wood and carving on it were the Sakas are very developed , according to wooden utensils , wooden figurines of animals and animals , a variety of fasteners . Along with carving developed craft associated with the processing of the bone and bone handicrafts production - zippers , buckles , buttons .

It has been noted that the Saki master grind and cut out of soft rocks magnificent altars , decorating them with rich carved ornament . Of colored stone - carnelian , chalcedony , agate , turquoise beads Saki jewelers produced .

Saki, like other nations , worshiped the forces of nature - the sun, wind, storm , thunder, which seemed to them in the way of the gods. And the gods , in their view , embodied in the fantastic beasts , birds and animals, such as the winged horses. The popularity of these images in mythology and folklore gave rise to a kind of " animal style " in the art of the Eurasian steppes .

The horse in the mythology of the Saks contacted with the sun and fire, presiding deity Mithras , who created the world , checking out, according to the " Avesta" , by four horses . By the horses had to do the gods Surya , Yama , Agni , Indra . Winged horses on the headdress of the king of Issyk barrow - it's a sun chariot . The image of the winged horse as an image of the sun is in the mythology of other nations. The Greeks are punished by winged horses chariot across the sky the sun god Apollo.

Images of predatory eagles were also symbols of the sun god . In the view of the Indo-Iranian peoples of the sun appears as a chariot with one wheel that race across the sky four horses or four eagle.

Saks had his notion of how the world ( cosmos ) . The order in space represent the concept of art, which is associated with the sun, the movement of the sun chariot. The order in space , harmony, in which the organizers were gods Mitra , Varuna , Indra, the model of the world was represented as a combination of the three worlds - the underworld - bottom , middle - earth, and the top - of the sky. The world has had four sides - right, left , front and back .

An example of a symbolic representation of the cosmos is the Saks headdress Saka king of Issyk. Ornaments on it are divided into three vertical tiers. Cover image is framed by a circle of gold chains of mountains and trees. At the foot of the mountains are placed " beasts of the earth ": tigers, goats . On the tops - birds , winged tigers . Ornamental frieze is the world mountain range , on presentation of Saks , the world around us on all sides. Ornament symbolizes the tripartite organization of the world from the bottom up : the underground world - the earth - heaven . The four points of the ring arranged crosswise friezes are images of animals - guardians of the cardinal points , east and west, north and south. In front of a sun hat badge - a symbol of the entire cosmos as a whole: four winged horses and four gold arrows. This is sort of a symbol of authority over all the three worlds and the four corners of the world, which the sun passes on its way. The front of the Saks considered the east side of light, rear - West. The laying of the cap - crown perceived them as the transfer of power to the leader over all the mythological cosmos. The leader embodies the axis of the universe, its center, and all of the characters on his clothes this mythological predstavlenie9 .

In general, the Saka or Saka -Scythian "animal , style " emerged as a natural expression of world- Saka tribes , as embodied in the fine art of mythology, as a special sign system for the expression of the ideology of the nomads.