Innovative ideas of the future 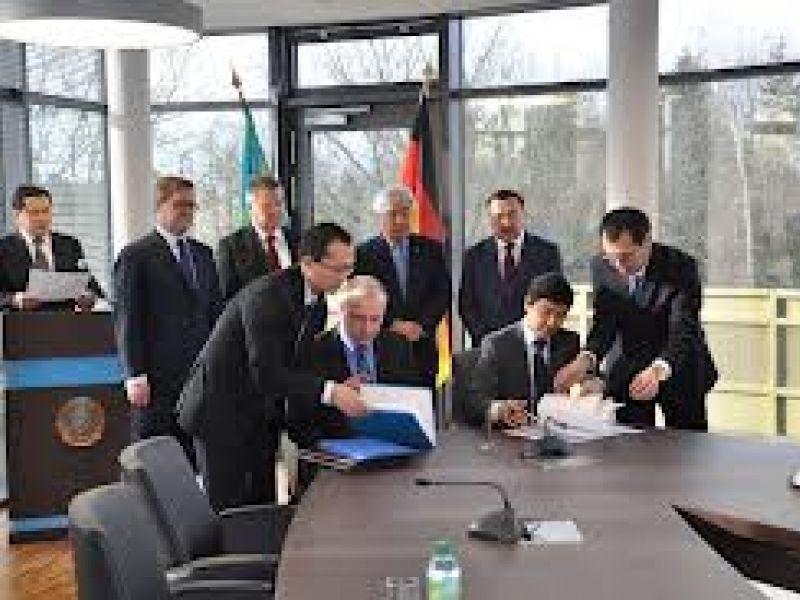 In Berlin in embassy of Kazakhstan in Germany a round table on the subject "New Kazakhstan — in the New World" was held. Action took place on the eve of a new state holiday - Day of the first president, a festival of unity of a historical choice, a unification of all Kazakhstan citizens round the leader of the nation, the first president Nursultan Nazarbayev.

The German politicians and public figures, the management of the ministries and departments of Germany, businessmen, experts and journalists with a great interest examined achievements of Kazakhstan for years of independence. Among the put forward by our country initiatives the special attention was caused abroad by the principles of G-Global – the principles of the new world in the XXI century. They became the real intellectual sensation.

Let's remind that in December of last year at the solemn meeting devoted to the 20 anniversary of independence, the president of Kazakhstan Nursultan Nazarbayev formulated the vision of world problems and put forward the idea of expansion of global interaction – idea of the world of G-Global. The Astana Economic Forum (AEF) became the following stage of study of this developed, conceptual idea.

The fact of emergence of such idea testifies that on the 21st year of independence Kazakhstan gained geopolitical weight not only as the regional player but also as the significant participant of global world politics.

With good reason Nursultan Nazarbayev noted: "Today Kazakhstan is perceived by the international community as the regional leader, dear and responsible partner, the sincere friend, the reliable and good neighbor. Dynamics of relationship of our country testifies to it with Russia, the USA, China, the European Union countries and Asia, our neighbors in the region".

The young country for short historical term reached impressive results: the international recognition and foreign policy subjectivity on the world scene. These goals were reached in the course of consecutive realization of the political strategy which has been put forward by the first president of RK.

"Kazakhstan is the key country of the region, - ex-German chancellor Gerhard Schröder declared. - President Nursultan Nazarbayev with his policy of neighborliness made the significant contribution to that the republic became a stability factor in Central Asia".

However Kazakhstan looks more widely and further. The country surely passed a way of market transformations, having become an integral part of civilized community of the states, having proved the mature, responsible and reliable partner. Interest of the western and east countries in Kazakhstan as increases in the strategic partner in proportion to his economic and political successes. And they are defined both objective, and personal factors.

For example, a geographical position of Kazakhstan at the intersection of power routes, as well as its stocks of oil and gas, it is possible to carry to objective foreign policy advantages. As one of recognized world experts Henry Kissinger noticed, "Kazakhstan is at the intersection of big civilizations and is the largest supplier of hydrocarbons to the world market".

However our country is interesting to the world not only because of uranium and hydrocarbons, but also because of state achievements. First of all it is the stability island in very unstable region. The political system of Kazakhstan also is characterized by respect for basic democratic values and political legal mechanisms that strengthens trust from the world community to it.

So not only and not so much the modern international weight and influence of Kazakhstan are defined by one objective geopolitical factors. In foreign policy success of the country the crucial role was played also by subjective factors, scale of the uncommon identity of president Nursultan Nazarbayev. Confirmation to it is that the country and its national leader constantly act with the major global initiatives concerning not only the CIS, Central Asia, but also the whole world.

Nursultan Nazarbayev is convinced that contradictions of a modern and future era don't give in to permission a unilateral way. The system, coordinated updating of the planetary world in a new format of multilateral interaction of all interested countries, the international organizations, expert circles is necessary, for world community. The G-Global project synthesizing in vision of global problems and practical ways of their overcoming is devoted to it.

The idea of G-Global in the first reading became an appeal to the world community to combine efforts in search of ways of prevention of a new wave of world crisis. The idea got broad support. From the moment of creation in January, 2012 a communicative Internet platform of G-Global visited over 1 million people. Already more than 30 thousand users from 150 countries became its constant participants.

In fact, intensive network search of ways of formation of a new world economic order began. For understanding of tectonic processes which became more active during crisis, global coverage is necessary.

The communicative platform of G-Global is a format which allows Internet users to take part from all over the world in various intellectual sectors – an expert review, debate, business projects, polls. The format is focused on citizens of all social groups and the countries of the world interested in development of national economies, in reforming of world economy and development of global anti-recessionary decisions.

AEF becomes a real working forum for G-Global. Abroad with great attention treated promotion by the president of Kazakhstan on the V AEF of five principles of G-Global: evolution, instead of revolution; justice, equality, consensus; global tolerance and trust; global trasparentnost and openness; constructive multipolarity. The president of Kazakhstan is convinced that it and is the principles of the new world in the XXI century.

It should be noted that the Astana economic forums which are held at the initiative of the president of Kazakhstan, became very noticeable phenomenon of the last years. At these forums the head of state states the opinion of development of world and national economy, formulates new initiatives.

Meeting Nobel prize winners, participants of the V AEF, Nursultan Nazarbayev noted: "AEF became today a global event which under the aegis brings together theorists and practitioners with a world name. The whole world, watching a forum, will wait for new ideas and offers". The head of state also emphasized: "If not to reform world currency system, the subsequent crises will be more large-scale and catastrophic. Therefore I am deeply convinced that the most constructive exit is introduction of uniform world currency of a new class".

Participants of a forum supported idea of expansion of world dialogue in the G-Global format and need of new world currency. In particular, Nobel prize winner Robert Mandell supported at a forum Nursultan Nazarbayev's idea about world currency and told that such currency in the long term surely has to appear.

Really, depth of world financial crisis in the past years was underestimated by many as analysts, considering short and medium-term tendencies, ignored its fundamental reasons. The head of our state is one of the few world politicians who could soberly and estimate deeply global changes occurring in the world.

In the middle of crisis in the performance at session of Assembly of the people of Kazakhstan he noted that now scientists with a world name, leading experts and politicians discuss three main options of further development of global crisis and the world community. Supporters of the first option, Nursultan Nazarbayev specified, say that crisis in the basis has single character, it reached a bottom, and the exit from recession now begins, that is everything falls back into place. Second option: the economy fell to a bottom, but the period of restoration will be tightened for 10-15 years. Third option: present crisis system, global and long. He will lead to change of a world social and economic formation.

The head of the Kazakhstan state emphasized that more and more experts incline to the second and even to the third options. And it is valid, today in the world there are furious disputes on recovery from the crisis strategy. As a result - there are many scenarios of a post-crisis world order. One of them was formulated by the president in his conceptual articles "Keys From Crisis", "Fifth Way".

The leadership of Kazakhstan in 2003 initiated creations of regional Euroasian currency, and in the 2009th the first put forward idea of replacement of dollar as world reserve currency.

In the analytical article "Keys from Crisis" the Kazakhstan leader adduced powerful arguments in favor of introduction of new world supranational currency - "акметал". Relay of offers from Nursultan Nazarbayev on reorganization of a world financial system was picked up by leaders of Russia and China. So, the chairman of the People's Republic of China Hu Jintao didn't exclude probability of use of national currencies in calculations between the countries of SCO and creation of supranational unit of account within the organization. Then the subject was supported also by the Russian president Dmitry Medvedev. He, in particular, urged to increase stability of a global financial system due to plurality of world financial centers and world reserve currencies.

After these loud speeches of leaders of Kazakhstan, Russia and China in many countries already at the top of the voice began to declare need of creation of new international reserve currency which has to come in stead of dollar.

Conference of the UN on trade and development (UNCTAD) published the report in which suggested to replace dollar with new universal currency. As consider in UNCTAD, the present financial system in which dollar - the world reserve currency, is inefficient and is the main reason for economic and financial crises. UNCTAD report – the first similar offer made from the international organization.

Nursultan Nazarbayev's ideas about "the fifth way", new world currency, the constructive principles of the world G-Global stated by it in fundamental articles and performances at the international forums, confirm its intellectual leadership and deserve the closest attention. After all exit search from an unstable global situation has fatal value for mankind history. Each nation, each state seek to make the contribution to permission of world problems. And Kazakhstan in this sense not an exception.

Certainly, in all countries reflect over the world future. But after all for breakthrough judgment the new country which would take on itself difficult and at the same time courageous mission is necessary – to inhale new life in a global world order, to become the idea man and decisions which will open the new horizons of development for the world. Kazakhstan – the young state in the center of Eurasia, the active participant of regional and global policy became such country. Thus, the head of state once again fixed leader positions of our country in judgment and solution of problems of the modern world. The policy of the president committed to long-term interests of global safety on the basis of variety, trust, evolutionary character and transparency, gained broad international authority and appreciation. As the ex-prime minister of Italy Romano Prodi noticed: "The world is global therefore the idea of G-Global is excellent. G-8 was insufficiently. G-20 – good idea, and G-Global is that is necessary for us now. A certain force is necessary to us. It is a tendency of new time".