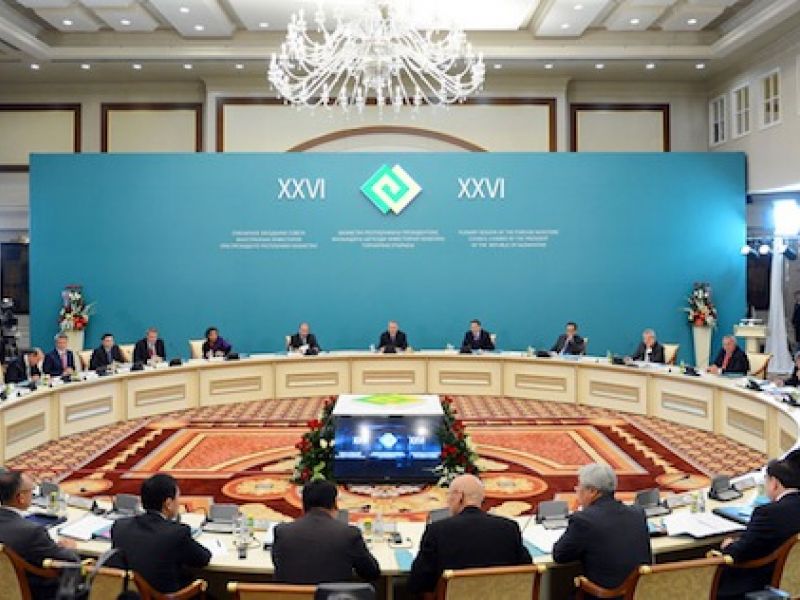 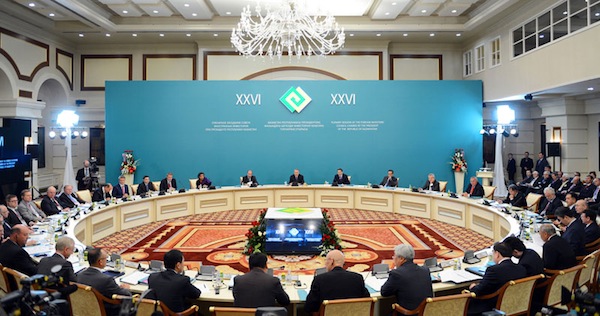 26th plenary meeting of Foreign Investors’ Council under the chairmanship of the Head of State N.A.Nazarbayev. Astana, May 22, 2013

Kazakhstan is a young independent state which has taken the road of integration into the world economy and transition to open economy. The participation of Kazakhstan as an importer and exporter in capital migration processes is imperative as this will facilitate the country’s involvement in production internationalization. At present Kazakhstan's participation in these processes is insignificant as compared to other Asian and Latin American countries being more attractive to foreign investors. The desire to attract as many foreign investments as possible is connected with the necessity of solving strategic and current objectives. Investments form production potential on a new scientific and technical basis and predetermine competitive positions of countries at the world markets. At the same time the significant role for many countries especially those which try to escape economic and social problems belongs to attraction of foreign capital in the form of direct investments, portfolio investments and other assets.

the improvement of investments’ efficiency for the purpose of economy stabilization and growth, its social orientation strengthening;

the determination and implementation using researches and developments of most profitable patterns of ownership and versions of establishment of market relations;

the acceleration of production modernization with introduction of advanced technical and technological systems, particularly for deeper conversion of raw materials and accumulated wastes in heavy industry, increase in production of consumer goods;

the attraction of foreign investments on a mutually advantageous basis into the priority sectors of economy;

the establishment of scientific system of motivations and sanctions providing under the conditions of market relations the reduction of construction terms and construction cost [1, p. 203].

There are three main factors which influence the investment attractiveness of Kazakhstan.

The second factor relates to the existence of natural and mineral resources. According to scientists our county ranks sixth in the world by reserves of natural resources. Out of 110 elements in Mendeleev’s Periodic Table of Elements, Kazakhstan’s land has 99 elements, of which 70 elements are explored, 60 elements are extracted and used.  Kazakhstan ranks first in the world by prospected zinc, tungsten and barite, second – by silver, lead, uranium and chromite, third – by copper and fluorite, fourth – by molybdenum and sixth – by gold.

The third factor relates to advantageous geographical position of Kazakhstan providing a consumer market with almost half a billion people for investors taking into account the markets of Central Asian countries, Russia and China.

The advantages of intensive reproduction can be implemented in practice in conditions of effective operation of market methods of management and adoption of new investment policy. It is called to take into account objective needs in production growth and technical improvement, in improvement of the living standard of people [1, p. 200].

The successful implementation of a new investment policy is directly connected with the program of economic stabilization and transition to market relations. This will require application of the system of the republic’s investment resources market regulation which should first of all include economic methods [1, p. 220].

The volume of investments attracted into Kazakhstan economy testifies the investment climate and image of our country. According to the National Bank of the Republic of Kazakhstan during the period from 1993 to 2008 around 89.7 billion US dollars of foreign direct investment (FDI) were attracted into Kazakhstan economy. The increase of FDI inflow into the Republic of Kazakhstan in 2008 has made 7.3% (US$ 19.8 billion) in relation to previous year. At that the increase in 2007 in relation to 2006 has made 73% (US$ 10.6 billion).

Despite the global financial instability in 2007-2009 Kazakhstan has managed to avoid serious consequences of financial and economic downturn due to joint anti-crisis actions taken by the Government, National Bank and Agency for Financial Supervision. GDP increase in 2008-2009 has made 3.3% and 1.2% accordingly while in the first half of 2010 it has made 8.0%.

At the same timeduring the global post-crisis development all countries strive to attract foreign direct investments by providing more attractive and favorable conditions for investors.

For solution of issues connected with creation of favorable investment climate and attraction of foreign direct investments the state’s activity was focused on implementation of industrial and innovation program for 2010-2014. The program devotes special attention to development of entrepreneurship, strengthening of investment potential and expansion of sales market [8, p. 1].

It should be noted that FDI volume into processing industry has significantly increased by 65% ​​(US$ 1061.2 million in 2007, US$ 1756.5 million in 2008) which makes 9% of total gross FDI inflow by types of activity, the increase in relation to previous year by 2.6% including into ferrous metallurgy is conditioned by acknowledgement of reinvested income of investors.

As of January 1, 2009 there were 19109 enterprises with participation of foreign capital (137 countries) registered in Kazakhstan.

The investment climate of the country is notable for best conditions for business. The Republic of Kazakhstan was the first among CIS countries to get investment grade ratings from international rating agencies like Moody's (in 2012), Standard&Poor’s and Fitch (in 2004).

According to international consulting company AT Kearney’s rating Kazakhstan was included into the list of 25 most attractive countries for investment.

The state has set the goal of entering the list of 50 most competitive countries of the world. Today the Republic of Kazakhstan holds the 61st position and intends to approach the goal according to its plan.

The interaction with foreign partners on an institutional basis acquires particular importance as this testifies careful attention to foreign investors. This is confirmed by operating since 1998 Foreign Investors’ Council (FIC) which meetings are held under the personal chairmanship of the President of the Republic of Kazakhstan Nursultan Nazarbayev twice a year. Currently FIC includes 21 executives of large foreign companies working in Kazakhstan.

In addition to investment law aimed at investments promotion and protection in Kazakhstan the Government of Kazakhstan signed bilateral agreements about mutual protection and promotion of investments with 41 countries including USA, Great Britain, Germany, France, Russia, the Netherlands, Turkey, Jordan, Qatar, etc. and one multilateral agreement between member-countries of EurAsEC. One of the measures of state support of investments is co-financing of projects through public financial institutes of development (National Innovation Fund, Corporation for Insurance of Export Credits and Investments, Development Bank of Kazakhstan, Kazakhstan Investment Fund, Corporation for Export Development and Promotion KAZNEX) [7, p. 5].

The main aim of these institutes of development consists in promotion of national economy diversification through creation of system of business development and support at all levels and efficient management of investment resources.

In addition the significant role in accelerating economic diversification and sustainable development of regions is played by socio-entrepreneurial corporations (SEC) carrying out their activity in seven macroregions of Kazakhstan. Each corporation represents a regional institute of development managing transferred state assets in a corresponding region of the country including sections of unassimilated lands and fields. SEC was established as a national company and acts as a generator of projects attracting investments for their realization.

Due to these corporations foreign companies have the opportunity to create joint ventures with participation of Kazakhstan partners in Kazakhstan where using foreign technology and domestic raw material will allow increasing competitiveness of their products. Instruments of economic stimulation like industrial and special economic zones, industrial parks have received a new development. Methodologically during the formation of investment policy it should be assumed that the achievement of best socially significant results is a determining factor of qualitative economic growth [1, p. 203].

The main volume of foreign direct investments is in the mining sector of economy. We have inherited high energy intensity of economy at a relatively low labor productivity level. Transport, housing-municipal and infocommunication infrastructure need modernization. Obstacles should not be a cause for stopping development but a good cause for self-improvement. We will work to turn obstacles into opportunities for development [2].

Intensive way of development requires the development of new investment strategies during the transition to market structures, expansion of investment cooperation between CIS countries and access to global market.Practical materialization of investments takes place during operation of industries creating investment complex funds [1, p. 209]. Kazakhstan has six special economic zones: “Seaport Aktau” for transport and logistics services; “Astana - New City” for construction and production of building materials; Information Technology Park near Almaty; “Ontustik” in South-Kazakhstan oblast – for development of textile industry; National industrial petrochemical park in Atyrau oblast and SEZ “Burabai” – for development of touristic cluster at a distance of 200 km from Astana.

The investment  policy of Kazakhstan is called to provide a favorable investment climate and will be based on principles of economic pragmatism: profitability, return on investment and competitiveness, as well as provision of economic capacity development by developing new points of economic growth and determination of new market niches.

2. Nazarbayev N.A. Report for Eurasian forum of emerging markets “Kazakhstan’s entering the list of 30 most developed countries of the world”. September 11, 2013.

3. Investment opportunities of Kazakhstan. State Committee of the Republic of Kazakhstan for investments . Almaty, 1991.

4. Law of the Republic of Kazakhstan “About state support of direct investments” dated February 28, 1997.

5. Analysis of investment into fixed assets in the Republic of Kazakhstan and member-countries of EEA. “Kazakhstan Institute of Industry Development”. Astana, 2013, 16 p.

6. Zhapbasova A. State support of direct investments in the Republic of Kazakhstan . KazSU Herald . Economic series . Almaty , 1998, No. 11.

7. Shapagatova B. National Fund of the Republic of Kazakhstan: investments into sustainable development . Almaty, 2011, 54 p.