Home Methodological tools Interdisciplinary Studies Methodological Ideological models, conception Events and conferences The role of the Leader of Nation in development of Kazakhstan from the perspective of young scholar 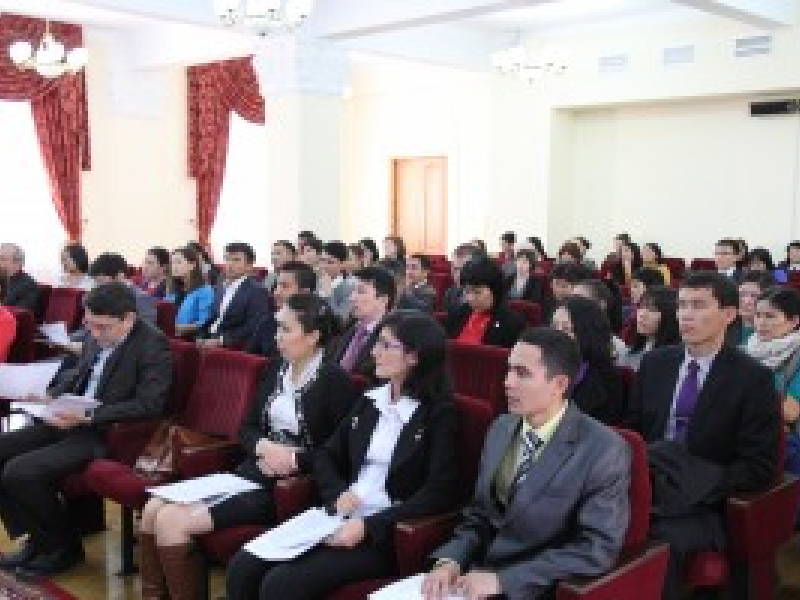 November 29, 2013, on the eve of the Day of First President of Kazakhstan, the Republican State Enterprise (RSE) "Gylym Ordasy" together with the Institute of Philosophy, Political Science and Religious Studies and by support of other research institutes in the humanities had a Young Scientist Forum on the theme: "The Institute of presidency and spiritual rebirth of nation".

The forum was opened by the Director of the Institute of Literature and Art named after M. Auezov Ualikhan Kalizhanov who encouraged young scientists to follow the example of President Nursultan Nazarbayevv and always strive for new knowledge and discoveries also work hard on self-improvement.

The CEO of RSE ‘Gylym Ordasy” Roza Karibzhanova in her introductory speech welcomed the participants of the forum. She expressed her joy that the young generation through such events shows their activity, interest and involvement in the development of their own country.

She also mentioned: “The President pays special attention to support youths. Characteristics like ambition, perfectionism and ability to respond quickly on emerging difficulties are appropriate for young generation. You have great energy, creative mind and ability to sort out information flow. There are powerful factors to increase competitiveness of the country”.

Zarema Shaukenova, the director of the Institute of philosophy, Political Science and Religion Studies, in her introductory speech indicating the role of the President of the country in the development of science, said:  the New Law “About science”, adopted in 2011 in Kazakhstan, significantly influenced on the rejuvenation of scientific personnel by enabling scientific leader of institutions to hire talented young scientists. After 5-10 years the science of Kazakhstan is in the hands of these professionals, so, from now, it is important to learn from the older generation”.

Meanwhile, young scientists reviewed their role in the future prosperity of the trough the discussion of the President’s contribution in development and formation of independent Kazakhstan.

“We are young state and our power in scientific and intellectual potential. The attitude towards young people has changed. The future of our country is on us. Thus we must be aware of our responsibilities and meet expectations of the Head of State,” – said Nurbol Kudaibergenov, the junior researcher of the Institute of Literature and Art named after M. Auezov, in his speech.

Zhibek Nesipbayeva, the researcher at the Institute of History and Ethnology named after Sh.Ualihanov, called young scientists to activate their activities for the development of the country. “Youth of Kazakhstan is a generation that has grown along with our independent state. For this category of people there are all conditions for self-realization, to get quality and affordable education, which in also includes the leading universities of the world”, - she said.

Within the forum for young scientists was presented the number of projects, including those which directed towards implementation of international exhibition “Expo-2017” in Astana.