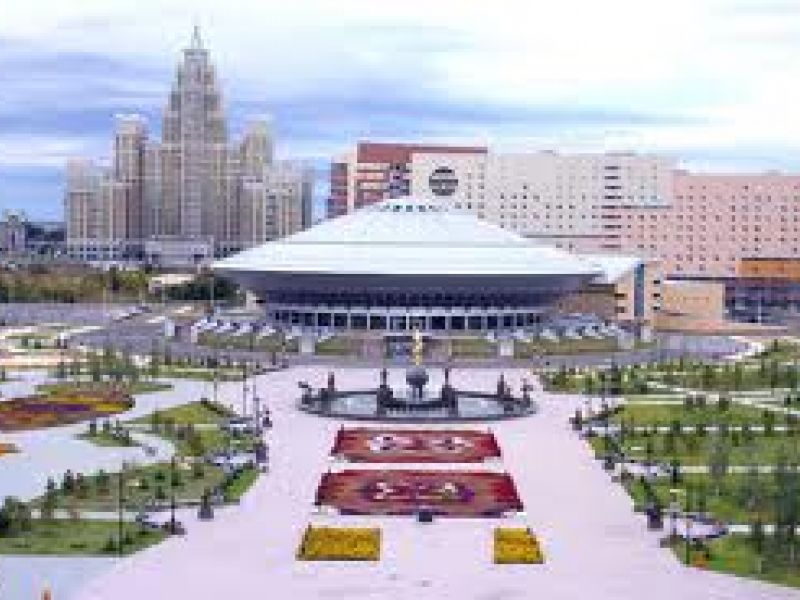 Astana has already contributed its “golden page” into the history of the young sovereign nation of Kazakhstan. As is known, in the mid 1990-ies, Kazakhstan President Nursultan Nazarbayev took a decision – unexpected for many, and yet fateful – to remove the capital from Almaty in the South to the very heart of the country. And within a short period of time Astana turned into an epicenter of economic, political and cultural life of the nation. The population has now exceeded the 500 000 mark. As of June 1, 2006, it reached 538 300. According to the Kazakhstani Institute of Management, Economic Studies and Forecasting, the population will reach 1,000,200 by 2030.

New pieces of architecture have added to the city’s beauty and changed its looks beyond recognition. Among those in charge of the city’s design there were foreign architects and leading construction companies. Establishment of Astanagenplan (institute for the city development) in 2000 greatly facilitated the city-planning process. In 2002, President issued a decree on establishment of the “Astana as a new city” special economic zone to put in place favorable investment conditions and propel inflow of foreign investments. A great emphasis was placed on development of the city’s master plan. There were two tenders held to define an optimum master plan. The 2nd tender was much contested with architects and architectural groups from Russia, Italy, Japan, Australia, Germany, Turkey, Poland, Uzbekistan, Belarus and some other countries participating.

Kisho Kurokawa, an outstanding theorist and architecture topnotcher of Japan, won the tender. He chose the concepts of symbiosis, metabolism and abstract symbolism to be the basis for Astana’s development. According to the Japanese architect, any city is a living organism that needs properly fit into the surroundings to enjoy harmony with the environment. His concepts just couldn’t have been rejected, given that the Esil River – main water artery of the city – has been a vital component of the steppe life. At the very outset, the developers were supposed to create a city that would be future-ward, comfortable, bright, and dynamic.

This task called for concentration of efforts and for new approaches that would combine both traditions and customs and new trends and best foreign practices. The first stage provided for overhaul and capital repairs of already existing structures, redevelopment of blocks of houses and central roads. Special requirements were set to the buildings’ facades: only light tones - instilling hope and boosting spirits – could be used. At the second stage, construction of a new administrative centre started on the Left Bank [of the Esil River]. The centre is to be fully accomplished by next fall.

Starting from the opening of the special economic zone here [up to July 1, 2006], there have been 162 new buildings started. Among the facilities still under construction on the Left Bank there is National Scientific Centre for Maternal and Child Healthcare (capable of 500), Children’s Rehabilitation Centre (capable of 300), National Neurosurgery Centre (capable of 160), Research Institute under the Emergency Medical Service (capable of 240), National Centre for Diagnostics (capable of examining 500 people per platoon), a cycle track, a stadium capable of 30 000, cinema-and-concert hall capable of 3500, and several residential quarters. For the last few years the city’s map has been expanded to include such buildings as the Akorda Presidential Residence, Houses of Majilis and Senate [of the Kazakhstani Parliament], Supreme Court premises, Ministry for Transport and Communications, Foreign Ministry, Centre for Cardiac Diseases, National Academic Library, and some others. Another administrative building – House of Ministries – is to be commissioned this year. The total floor area of the latter makes up 228,000 square meters. The 1.5-km-long building comprises 20 sections and has a stepped configuration (its height varies from 8 to 10 stories). Apart from offices, the House of Ministries comprises 4 conference-halls, 6 dining facilities, as well as halls for archives, a museum, and a medical centre. Completion and commissioning have been scheduled for December 2006.

The total of investments into the city’s development since declaring the special economic zone made up KZT 442.6 billion, KZT 239.4 billion thereof being fully absorbed (as of July 1, 2006).

Getting broad publicity as a rampantly growing city, Astana has been of interest not only to political figures and social scientists, but also to architects. Thus, famous architects designed some of the city’s pieces. For instance, two projects of Norman Foster, and outstanding British architect, have been implemented. The first of them is the Pyramid of Peace and Accord to serve a symbol of cross-confessional accord and tolerance within the Kazakhstani society; and the second is the Khan’s Pavilion, a year-round trade-and-entertainment centre beneath a tented roof. The building resembles a housing of ancient nomads of the steppes.

The 25-storied Pyramid of Peace has a glass-and-granite clad, and sits on an artificial 15-m-high hill. Its floor area makes up 25.500 square meters. The Pyramid houses a Museum of National Culture of Kazakhstan, University of Civilizations, exhibition and concert halls, a library, a research centre for religious issues, and [representation] offices of world religions. Inside the man-made hill there’s a 1500-set opera house; and at the apex there is a circular chamber to house triennial congress of world religions.

The Khan’s Pavilion design has been based on the Hanging Gardens of Babylon. The project provides for a 3-hectare-large orchard to be arranged in 4 terraces, with citrus plants, orchids and other exotic [for this region] plants. The top of the Khan’s Pavilion will be transparent plastic, in the upper part – at the height of 100 meters – there will be an observation deck. The lowest part will house multiple stores, fitness centers, 6 movie-theatres and other facilities. The centre is to be completed in 2.5-years’ time.

Currently, there is a cinema-and-concert hall capable of 3500 (designed by M. Nicoletti of Italy) being constructed on the Left Bank. With its slanted sides, the structure will look like a sailing vessel or a rose.

Once completed, the Baiterek Tower gained a status of the young capital’s symbol and has been very popular with both residents and visitors of Astana. The tower is toppled with a golden sphere placed on the canopy of the mythological tree at the height of 97 meters. The Baiterek Tower embodies a legend of a magic bird called Samruk that laid its eggs in the canopy of a high poplar (“Baiterek” means “a high poplar”). Here, you can get a bird’s view of the city expanding both upwards and broadwise. Astana visitors are also attracted to the President's handprint set in gold [at the top of the observation tower], to which they touch for luck.

Atameken Map of Kazakhstan (Kazakhstan mockup) is another popular object that attracts lots of visitors. Here one can easily “walk around” the entire Kazakhstan that ranks 9th in terms of territory (1.049.150. sq. miles). The “entire country” [the Atameken exhibit] only makes up 1.7 hectares with over 200 mockup pieces. About 40 of them are miniature architecture pieces of the administrative part of Astana on the Left Bank.

It must be noted that tourist value of the capital has been constantly growing. The Intercontinental Hotel, the first 5-star hotel – was the first in line to offer accommodation to the city’s visitors. Built within 2-years’ time, the hotel provided accommodation to the high-ranking guests who came for the official presentation of the new capital in June 1998. The total floor area of the hotel makes up 47 000 square meters.

L. Gumilev Eurasian University, a true symbol of the Eurasian integration concept, has been in the front rank of the capital’s life. On the initiative of President Nazarbayev, this University was named to honor Leo N. Gumilev, an outstanding expert on Eurasia issues and Turkic culture. The University has been hosting large-scaled international scientific workshops. The University events have been attended by Heads of state, heads of governments, prominent political and public figures of foreign countries. One of the outstanding guests of Kazakhstan to visit the University was Pontiff John Paul II (2001).

Presidential Centre for Culture has become a true spiritual home to the Astana residents; built in 2000, the Center comprises a library holding 570.000 books, a 400-seat concert hall, Museum of Kazakhstan, and various workrooms. Total floor area of the Center makes up 15 500 square meters. National Academy of Music has been constructed in the shape of a grand piano. This imposing piece of architecture was designed by Sagyndyk Zhanbulatov, a Kazakh arcitect. One of the most significant cultural events was the opening of the circus constructed in the shape of a flying saucer. The building was designed by another Kazakhstani architect Tolegen Abilda.

What concerns the transport infrastructure, a word must be said about the M-1 Bridge constructed to link the two parts of the city on the banks of the Esil River. The bridge enabled to solve the problem of busy traffic in the central roads. As of today, the number of cars has reached 200 000. About 20 objects of transport infrastructure are going to be constructed for 2006-2010, including 4 bridges, 8 overpasses, 8 pedestrian subways, 2 underpasses, and about 42 kilometers of automobile roads.

Dynamic development of the city is testified by 4-fold growth of the population for the few recent years. Contribution of the city to the national GDP makes up 2%. In H1 2006, the capital’s budget revenues totaled over KZT 176 billion, which is KZT 15,200,000 up from the target level. The number of small businesses made up over 40,000.

As of today, the capital has been maintaining friendship and twin-city relations with 20 cities of the world and 6 regions of Russia. Astana accessed the International Assembly of Capital and Big Cities. In 1999, Astana was a UNESCO city for Peace Prize. At the present time, establishment of a Grand City-planning Council under the leadership of the President with participation of leading architects of the world is being elaborated. In September 2006 Astana will host an international sculptors’ symposium.

Astana has set a grand, yet feasible, goal of becoming one of the top capitals of the world. And the city has been doing its best to hit the target.