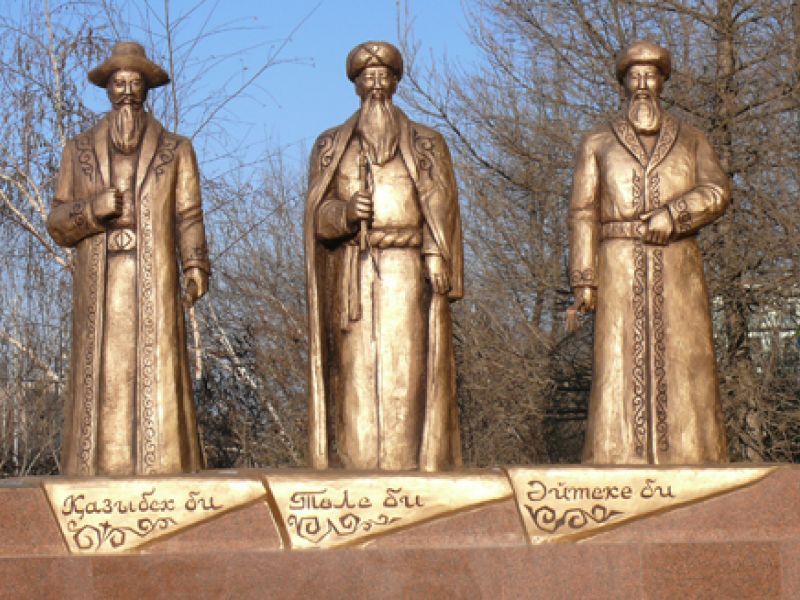 In Kazakh society in 15th -18th century the main judiciary power belong to biys (judge, court). Any freemen who had sufficient authority, knowledge of customary law and eloquence, legally were able to be biy. In addition, the highest judicial authority possessed Khan, who had the right to review the decisions of the biys.

Speakers — shesheny (orators) and biy, undoubtedly, take an important place in the history of our nation. The most outstanding among of them are 3 biys: Tole, Aiteke and Kazybek. It was great oratory that raised them in a number of historically significant people of the Kazakh ethnic group. Along with these activities of Kazakh zhyrau (representative of a certain genre of Kazakh historical poetry) akyns (poet-improviser) among them are Bukhar, Ahtamberdy, Umbetov, Tatikara, Kozhabergen zhyrau and many others.

In a typical Kazakh law the case could not be prosecuted according to the fact, it only began by the initiative of the victim. Prosecutor called «daulaushy» or «talapker» and defendant «zhauap berushi» or «zhauapker». In addition, during the process the representatives of the prosecutor and defendant were witnesses. According to the Kazakh customary law, the court was transparent, competitive and all the cases, both criminal and civil have an enforceable nature.

Biys were elected by mutual agreement of the parties and the biy could be given a discharge, but only until the beginning of the process. The case began with the ritual of throwing lashes of prosecutor and defendant before the judge. It symbolized the consent of both parties to the composition of the court and consent of future decision of the biy.

Before the process, biy offered reconciliation to the parties and in case of failure began hearings. This usually occurred in front of a large crowd of people, who were not only concerned about the case, but also the general public.

The case used to presented verbally by the prosecutor or his representative, the defendant could also present its own version or through representatives.

Kazakh customary law provided a different approach to the witnesses, depending on their social status. The evidences of women, the relatives of the prosecutor and defendant, underage, persons subjected to corporal punishment, as well as persons found insane were not accepted. Evidence of freemen had probative value only after the integrity of witnesses confirmed by an oath. Evidence of sultans, biys and other influential persons were made without the oath. Zheti Zhargy determined that «in order to verify the crime requires at least two and sometimes three witnesses».

One of the most important institutions of the judicial process in the Kazakh customary law was the institution of the oath — «ant beru». It was used if it was impossible to find out the truth in other ways.
There were two types of oath — evidence and clearing. Evidence oath required from witness of the prosecutor. Clearing oath was given by the defendant.

Enforcement of the biys entrusted to the defendant, however, the prosecutor’s failure to carry out the sentence, resorted to the institution «barymta» — violent cattle rustling. Barymta was legitimate procedural norm, if it met the following requirements:

1. If it was accomplished with the consent of biys, who sentenced, and the ruler of the community of the prosecutor;

3. Number of stolen cattle was approximate to the amount of the claim.

Barymta often accompanied by physical injury to representatives of one party or another and even murder.
In multiple mutual cattle rustling and the inability to determine the legality of barymty, biy court resorted to reconcile the parties — Salavat.

18th century was the turning a milestone in the history of international law of Kazakhs. Edge of 17th- 18th centuries, required the diversity of methods of diplomacy in comparison with previous periods. Geopolitical position between the Russian Empire, Qing Dynasty and Dzungaria and the problem of «survival» in the grip of these were very topical at that historical moment.

Activities of Kazybek biy in this case were very important. The political Khan’s board was legitimized, which according to some historian called «Union of the six Alash», when Tauke Khan created a single Kazakh state.

In addition to the three major Kazakh zhuzes Tauke Khan obeyed Karakum, Karakalpak and a separate group of Kazakhs from Katagan and Dzhaima tribes.

Six leading biys were included in Khan Board as representatives of six ethnic groups. Second in importance after Tole biy was Kazybek biy. Exactly this union of six related tribes managed to fight back to dzhungars. The appeals to fight against the common enemy were made Kozhabergen zhyrau:

In 1729 under the leadership of Abulkhair Khan, in 120 km to the south of Lake Balkhash the largest Kazakh-Dzhungar battle, which ended in total defeat Dzungars, took a place. Unfortunately, it was the last victory due to erupted between the Kazakh Abulmambet, Samek and Abulkhair khans differences about who will be a senior Khan of three. The Kazakhs were not able to take advantage of the military and political results of this victory.

Dzungars genocide against the Kazakhs made influential biys seek for admission to the Russian citizenship. It was idea of Kazybek biy. He made a decisive move, but on behalf of the Middle Horde. Later Tole biy applied for Russian citizenship. Kazybek biy due to his oratorical and diplomatic qualities, also for his courage was able to release from captivity a significant part of the Kazakhs.

Biy’s congresses were several times a year at the request of the people and if it was needed. Extremely complex disputes over the rights to land and livestock, perennial litigation to pay various fines, family and marital conflicts were considered at the congresses.

It should be noted that the nature and content of the decisions of the congresses was unacceptable to view in isolation from the legal customs established in the Kazakh society without moral and ethical foundations of law, the views of the Kazakh people.

Marriage in Kazak society consisted only in strict compliance with the requirements of a number of principles. Most important condition for it was the degree of kinship.

The health of the offspring was the important for Kazakhs people, thus they did not want to violate the established degree of kinship. Moreover, in the south-west of Kazakhstan marriage to the eight generations were not allowed. In some southern regions twelfth-thirteenth degree of kinship was not allowed. Certain derogations have become frequent in the second half of the 19th century. For example, in the Syr-Darya region marriages until the third or fourth generation began to practice.

The ultimate authority for the Kazakh people in conditions of Russian colonization invariably remained biy.
The decisions of the biys were outstanding monument of historical thought of Kazakhstan.

The decisions of the congresses biys, despite local differences, had a common, comprehensive theory of the civil rights of women, which presents the most fundamental principles and norms of adat already present radical new position. It is known that people’s legal views are more resistant than the legislation. Legal views of the Kazakh people did not remain in absolute stillness, they were under the influence of conditions and time of change and development.

Decisions of Congresses biys were based on the individual applications and petitions. They contain a wealth of concrete historical and legal material that reflected the problems that worried the people and demand a specific answer.