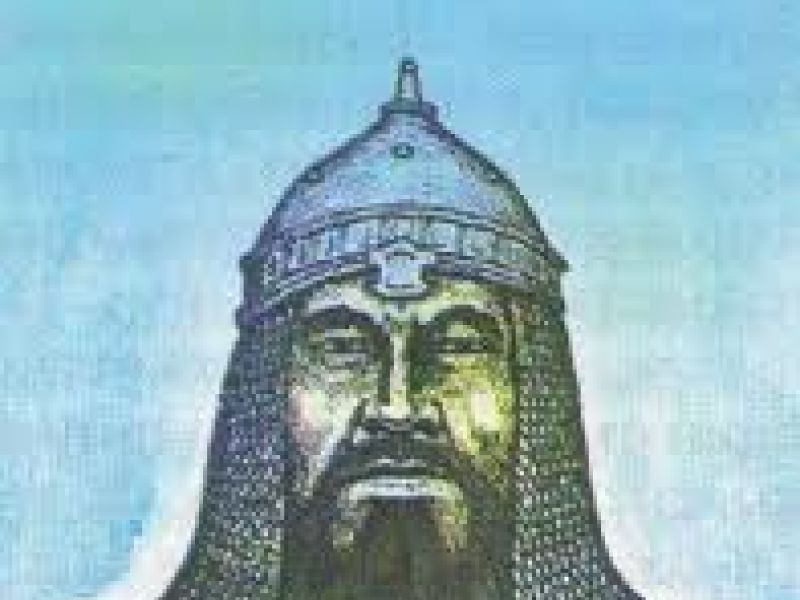 30th - 50th of the XIX century mark an important boundary in the history of Kazakhstan. In economic and social situation of edge growth of economic development of some regions of Kazakhstan, caused by its retraction in the all-Russian market is observed. Political position of Kazakhstan during this period was unstable.

Extremely heavy there was a position of the Kazakh population which lived in the territory located on the coast of Syr-Darya. Strengthening of expansionist aspirations of the Russian Empire and also an aggressive policy of the Khivan khanate became the main reason for fight of prisyrdaryinsky Kazakhs under Dzhankhozhi Nurmukhamedov's leadership. One of heads of a sort shekty, Dzhankhozha won to himself among simple workers glory of the authoritative and purposeful batyr possessing uncommon qualities. Willful and imperious governor Dzhankhozha by this time began to understand that Kazakhs-eginshi who made bulk of prisyrdaryinsky Kazakhs, were subjected to very strong colonial oppression. One of the main issues was a question of the earth. After occupation of Joint stock company Mosque the Syr-Darya military line where were separated the big areas for a settlement of Cossacks and immigrants and which were withdrawn from possession of the Kazakh population was created. The Kazakh population was imposed with a tax. Besides, the set of duties — the maintenance of roads, construction of bridges, cleaning main арыков was imposed also, an animal-drawn duty — Kazakhs had to allocate camels for works on the requirement of chiefs of the line, allocate people for building of strengthenings and deliver cattle for transportation of construction materials. Thus performance of duties often coincided with a season of works that very much cost much for eginshi.

In 1849 it was moved in strengthening Raim the first 26 families of the Orenburg Cossacks. By 1857 about 3000 Kazakh families were driven from the places and moved there; where there was no arable land and water for an irrigation. On places where there lived Kazakhs, immigrants took big advantage that led to cruel operation of the Kazakh population.

All this collected for years and in the mid-fifties of the XIX century poured out in open performance of Kazakhs-eginshi of a sort kishkentay-shekty.

An arbitrariness of the Khivan khanate in relation to Kazakhs was wrapped excessive in requisitions, robberies and arbitrariness. At the beginning of the 50th of action of the batyr were in sight of administration both Russian, and Khivan. In 1843 Dzhankhozha destroyed Khivan fortress on Kuvandarye, and in the spring of 1845 broke group of hivinets to 2000 people, sent into restoration of the destroyed fortress. In fight against hivinets of Dzhankhozha used a peculiar strategy, I attacked strengthenings, I destroyed them. So, its armies took Gian-Kala fortress. In 1847 and 1848 it helped the Russian armies to beat off more than once hivinets about fortress Raim. Джанхожа took part and in Kenesara's revolt (then having, however, departed from this movement) and together with Kenesara Suzak crushed the fortress of hivinets. Imperial administration, seeing, what authority Dzhankhozha among shektinets used and wishing to attract it on the party as the tool of the policy, more than once I showed to it the signs of attention. So, in 1845 200 rub and cloth on a caftan were sent it, and in 1848 the Cossack captain rank was granted, in the same time it was offered to it to take the oath to the Russian government when Dzhankhozha refused it, it deprived of a rank of a Cossack captain and discharged of management of kishkentay-shektinets.

Oppression from hivinets, on the one hand, dispossession of land — with another, led to open performance against colonial oppression. Naturally, risen imagined that the Kazalinsky fort was the main responsible for their disaster and therefore their actions first of all were directed against imperial administration, and Dzhankhozha Nurmukhamedov who by this time was more than 90 years old became the head risen. Thus, the main reason for revolt was covered in the forced hard labor made by Kazakhs on the decision of the Orenburg administration, in an excessive road tax and service of caravans, and also in resettlement policy of an imperial mode.

In 1856 direct military operations between imperial armies and risen began. Before Dzhankhozha I acted as the ally of the Russian military command in its fight against hivinets, and now I became the active fighter against the Russian colonization of the regions of Syr-Darya and its inflows. By the end of 1856 Kazala's all region was captured by revolt, by this time at Dzhankhozhi was to 1500 armed Kazakhs. In revolt took part not only shektinets, but also other sorts, including nomads. In this revolt of Dzhankhozha used the favourite tactics, and by the end of 1856 it took the Kazalinsky fort in a siege. Insurgents by this time destroyed the settlement the Soldier's settlement where there lived settlers. Against the risen beginnings to work Mikhaylov's which was in a fort the group (the Cossack one hundred, 50 people of infantry and one tool), one of Mikhaylov's sorties terminated in defeat of small group of insurgents. Other group of imperial armies under command of major Bulatov fired at camp of insurgents. These actions took place from December 19 to December 23, 1856. To the last dates of December fight went with variable overweight. However in the end of the year under pressing Perovsky from Joint stock company Mosque the group of major general Fitingof was directed (265 soldiers, two tools and one rocket machine), having connected at the beginning of January, 1857 to groups of the Kazalinsky fort. Fitingof had 300 Cossacks, 320 people of the infantry, one down, two unicorns and two rocket machines.

On January 9, 1857 there was a decisive battle between insurgents and Fitingof's group. As a result risen suffered defeat though at Dzhankhozhi was to 5000 armed horseback riders. After battle Fitingof started in pursuit to pursue risen, having compelled them to pass to the right coast of Syr-Darya and thus to borders of the Khivan khanate. With Dzhankhozhi removed to 20 auls. Within the Khivan khanate Dzhankhozha I tried to find for myself allies in the person of the Khivan khan or Bukhara, or Kokand, however, it didn't manage to make it. So performance of Kazakhs under leadership of Dzhankhozhin Nurmukhamedov terminated.

The bad voorzheniye and backward tactics rose, locality of their performance, a support on old medieval regimes became the reason of defeat of insurgents.

Repressive measures consisted in plunder of auls, the total of the cattle captured by chasteners was so taken one cattle of 21400 heads", and as a whole, was three times more. Besides, repressions very seriously struck on ordinary workers. Dzhankhozha departed from affairs and carried out only functions Biya, subsequently was killed by the opponents.

12 . Works of society of studying of Kazakhstan. Office of history and ethnographer. VII. in hl. 2 . Page.