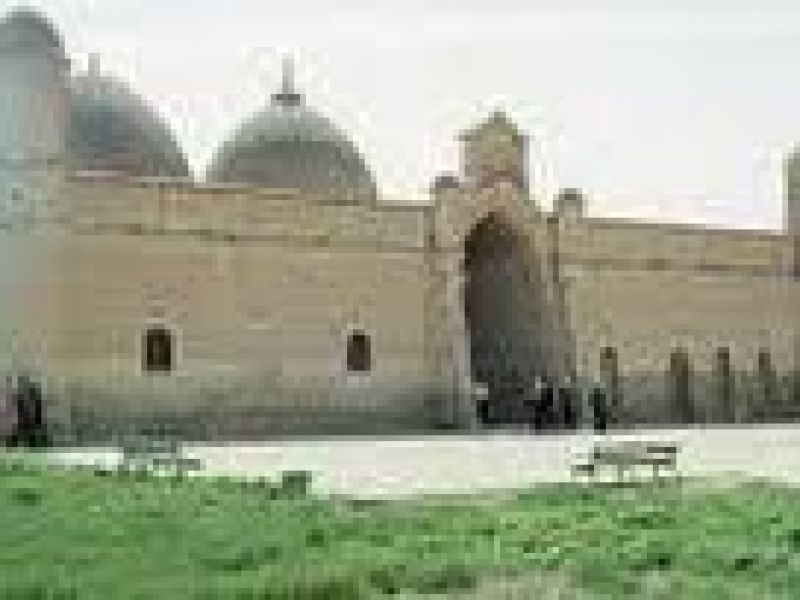 The flowering of medieval urban culture of Kazakhstan, the apogee of which falls on the X-XII centuries, was interrupted by aggressive campaigns of Mongol troops.

Traditional ties of cities and nomadic steppe were violated. Also steppe was severely injured in the course of the invasion.

But gradually, the consequences of the Mongolian massacre are overcome in the south of Kazakhstan. By the middle of the XIII century, city life revives, although its scope cannot be compared with what it was before, yet there is a restoration of cities, settlements, economic ties of the areas come to life, cities are drawn into the orbit of international trade and diplomatic relations.

Numismatic material is the clear evidence of recovery of economic life of the South Kazakhstan cities. In the middle of the XIII century, Mint of Otrar starts to work intensively in which first gold dinars then plated dirhams and brass felses are minted. Otrar was the only city in Kazakhstan and Central Asia that issued e the coins of all three traditional denominations in that time. Wherein, silver dirhams of Otrar were provided not only in local monetary trade, but also in the inter-provincial trade.

In the second half of the XIII century, money products were also produced Besides Otyrar by Kendzhde and Jenda.

In documents of the middle of the XIII century, Otrar Zernuk, Sayran, Yasi, Sygnak, Baruket, Saudakent, Kumkent, Urosogan, Suzak are mentioned. At the international caravan routes new urban centers are originated and developed, such as Saraichik on the Ural River. His foundation dates back to the second half of the XIII century. The city located on the main trade route from the East to the West of East Turkestan, from Kazakhstan and Central Asia to the Volga region, the Crimea, and Europe.

Researchers believe that the last quarter of the XIII century can be considered as the time when the favorable conditions are strong enough for the partial restoration of urban life and the money trade of Central Asia. Thus, in the Otrar was excavated a large complex of bricks burning workshop, which was launched in the last quarter of the XIII century. It supplied the material construction, which began in the Otrar at this time. Mosque of Otyrar was built from the burnt brick at the turn of the XV-XVI centuries. Its main entrance, judging from the surviving structures, has been decorated by rectangular pillars and moved to the corner where there was a round tower minaret.

It is a widely known fact that the Mongols prevented the revival of the destroyed cities as military fortresses. Only gradually cities were again enclosed with walls. In Otrar wall was built at the end of XIII - the beginning of the XIV centuries. At this time, as evidenced by the excavated material, the new types of dwellings have appeared. Among them are the houses with straight and cross planning, already known from the XI century; in the XIII-XV centuries, those houses were further developed.

There were some changes in the interior of the dwellings: sufa now occupies almost the entire area of ​​the dwelling, except tashnau site. Also, a new type of hearth appeared - the tandyr with a chimney. It becomes a versatile type of hearth. Moreover, overlap of houses relied on the central pillar or wall. Finally, the houses have storage with bins - clay boxes.

In the second half XIII century, the main arterial streets are maintained but planning of urban neighborhoods completely changes. Districts of Otrar of the last quarter of XIV- the first half of XV century maintain their old borders.

"Block of potters" had been excavated in Otrar. 10 workshops on the level of XIII-XV centuries are studied. Otrar workshops give an idea about the exiting of individual production of independent artisans working in the studio at the house.

Topography of the workshops, their relative positions suggest a corporatism of production. A comparison of the size of the workshops, the number of furnaces in each of them gives an indication of social differentiation among the potters. The analysis of the manufactured products shows the existing at that time specialization.

Copper rafts was also greatly developed. Otrar was the center of the production of bronze mirrors. Jewelry craft is presented by numerous ornaments of silver and bronze - rings, bracelets, earrings, and pendants. As before, glassmaking was highly developed: pitchers, decanters, bowls, apothecary glassware were manufactured.

There is a few data on the production of fabrics and carpet weaving. Their existence in the city can be judged by the findings of cotton bolls, the burnt remains of fabric and pieces of shrouds from burial of XIII-XIV centuries on Kuyruktobe.

Despite the devastation of cities, international trade routes continued to operate; new directions were also opened, in particular, the busiest caravan was a diplomatic path that connected Europe and Asia via the Volga region, the Urals, Khorezm, the Syr Darya and Semirechje.

Rise of the economy of the region and the cities such as Signak, Sauran, Otrar undoubtedly played an important role the fact that at the beginning of the XIV century, these cities became a part of the Ak-Orda, which was the first major state formation created on the basis of local economy on the territory of Kazakhstan after the Mongol invasion.

Joining of the southern regions of Kazakhstan to the Empire of Timur, the stabilization of the political environment contributed to some revival of economic and cultural life. An important role in the rise of Turkestan, Karnak, Otrar played a grand building of Ahmed Yasawi complex and Arslan-Bab Mosque; concentration in Otrar, Yasi, Saurane a large masses of troops, and, as a consequence, the recovery of trade between regions.

The fate of urban culture in Semirechye was different. The situation there in the first years after the Mongol invasion was relatively safe. In the Ili Valley mentioned Kaylak, Ili-Bakyk , mentioned cities in Talas and Chu valley. Life flowed into them quite intensively. And yet, in the middle of XIII century, begins the general decline of agricultural and urban life. The reasons that caused the death of urban culture in Semirechye, were different, but they were intertwined in such a bunch that nor ancient tradition of settlement, nor attempts undertaken by the central government to save city culture, nor passed through Semirechje trade routes could not withstand them.

Semirechye territory was politically torn into three parts: in the Ulus of Jochi (northern areas), Chagatai ulus (Valley Chu, Talas, the southern part of the Ili valley) and Ugadei Ulus (north-eastern areas). Large numbers of nomads moved to Semirechye, who, with the encouragement of the supreme authority, barbarously treated the citizens and settled rural population. In the interests of nomadic elite cultural land that was previously used for crops, orchards and gardens, now, were giving for grazing.

As an illustration to this remark, words of William Rubruck, who crossed the Semirechye in 1253, could be given. He wrote about the Ili valley, "... before, there were many small towns, but they were mostly destroyed by the Tatars who wanted to graze their herds,as the excellent pasture land was there."

Thus, the decline of settled culture here begins immediately after the Mongol conquest and the cities as centers of transit trade and handicraft production in the middle of the XIII century outwardly look well, but feeding them agricultural district was extensively destroyed, which soon leads to the death of the cities themselves.

Surveys of the remains of ancient settlements show picture of desolation. There is only slightly more than a dozen towns and cities continued to function in Talas valley, two of them in the lower reaches of the river Talas, the other in the upper reaches of the river, others in the area of ​​Sheldzhi where intensive development of silver-lead mines continued. A similar pattern is observed in the desolation of the Chu Valley. Archaeological surveys are recorded seven villages where life existed after the Mongol conquest. However, they exhibit clear signs of decline. Cities are gradually emptying, only some parts of shakhristan and rabads are inhabited, the cities, long shielded by shafts, are thrown.

Archaeological research in the Ili Valley indicate a permanent end of life on ancient settlements Almaty, Talgar, Chilik, Dungene, Antonovskoye, Sumba, Kok-Tuma by the end of the XIII century. In the written notice to the XIV-XV centuries, said that in Ili area “there are no towns, no buildings; all of its inhabitants are nomads."

The final blow to the economy of Semirechye was caused by Timur hiking. As rightly noted by researchers, its aim was not only looting, prey capture, disorganization of economy and weaken of the military forces, but also the direct capture of new territories.

However, despite the massacres and devastation made by the Mongols, the traditional line of urban culture was not interrupted. Just as in other areas where there were ancient sedentary and urban traditions cities of this period in the social and territorial, and cultural relations were continuations of the pre-Mongolian cities.

Continuity can be traced in the architecture and construction, and in the elements of urban improvement, in the arts, first of all, in ceramic and jewelry.