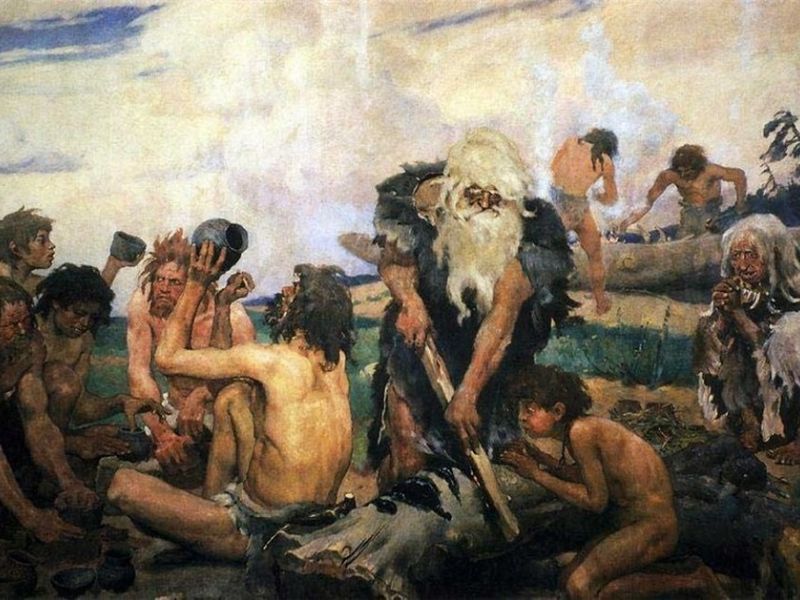 Preconditions of the Hominids’ appearance on the territory of Kazakhstan should be examined taking into consideration geological and geographical conditions existed in the transitional period, primarily in the second half of Pliocene. Traces of the earliest Hominids were discovered on a huge area from African continent to the modern arid line and the territory of Siberia. It is clear nowadays that 1,6 — 1 million years ago sites of Hominids already existed under the similar conditions on the opened area of the Caspian Sea, the Turan Desert in Mongolia and Northern China. Palaeogeographic conditions of Pliocene allow us to consider that Asian plains with relatively low mountains and favorable climate could contribute to fast migration to the North. Apparently, at the beginning of colonization of the Eurasia Kazakhstan, Mongolia and Northern China were the northernmost regions of oecumene.

There are still no any remains of ancient man discovered on the territory of Kazakhstan. However, palaeogeographic situation in the Southern regions of Kazakhstan was favorable for ancient man to live. This idea was supported by findings from Southern Kazakhstan — archaic stone tools similar to primitive tools of the Early Acheulean period from South-Eastern Asia and Africa, species composition of ancient animals close to fauna found along with Sinanthropus in the Zhoukoudian cave in China.

The Karatau Mountains were one of the most suitable regions of Kazakhstan for the settlement of ancient man. There are no any traces of Quaternary freezing within this mountain chain and bordering regions. Relatively humid and warm climate, rich and water-demanding vegetation, various fauna created necessary preconditions for existence of human beings during the Early Paleolithic Era.

Massive rectangular flinty flakes discovered near Konyrdek settlement in consolidated conglomerations which form Lower Quaternary the highest above the floodplain terrace of the Arystandy river on the South-Western sides of the Karatau mountain chain. These ancient tools of so called “Clacton” type are distinguished from later tools by disproportionate impact knob occupied more than half of the whole flake. In addition to them flinty crude products, nucleis were found.

Typological similarity in form and methods of producing of stone tools from the Karatau and ancient findings from Africa, India, Pakistan and China allow us to tell that the territory of the Southern Kazakhstan was inhabited by people in the Early Acheulean period.

Ancient dwellers of Kazakhstan were contemporaries of Pithecanthropus and Sinanthropus who in evolution respect were adequate to the phase of Homoerectus. Primitive inhabitants of the Karatau already know how to make and keep fire, were engaged in hunting for big and small animals and collection of plants. This is evidenced from buried remains of material culture of the unique monument Koskorgan and Shoktas in the Southern Kazakhstan.

Archaeological materials demonstrate that the territory of the Central and Eastern regions of Kazakhstan was colonized by ancient man in the Acheulean and Mousterian period.

One of the possible ways of colonization of this vast region passed through the Southern Kazakhstan where the most ancient cultures of the Lower Paleolithic were discovered. There are monuments in Central Kazakhstan which preserved Karatau traditions of tools production. The most ancient among them dated to the second half of the Acheulean period are sites Obalysai and complexes Semizbugy (Karaganda region).

In addition, more than dozen locations and sites of the Mousterian period and the Late Paleolithic period including Vishnevka site containing two cultural layers, Ogiztau I and II, Sayak complexes were discovered. Among tools the following were marked: strickles, scrapers, bifaces, points, chopper-looking and sinuate items.

The territory of the Central Kazakhstan, where in recent years multi-temporal Paleolithic monuments were found, can be considered as one of the regions perspective for investigation of the Early Stone Age in Kazakhstan.

Appearance of man of modern type (Homosapiens) is related to the period of the Late Paleolithic. Since that time the fundamental turning point in the evolution of Hominids and final transition to authentically human history began.

The monuments of the Late Paleolithic period in Kazakhstan are not investigated sufficiently; while in some regions such as Western and Southern Kazakhstan they are almost unknown. However, it is enough information about outstanding monuments Shulbinka (Eastern Kazakhstan), site named after Ch. Valikhanov, Maibulak (Southern Kazakhstan) to assert that the progress of man and his culture went on.