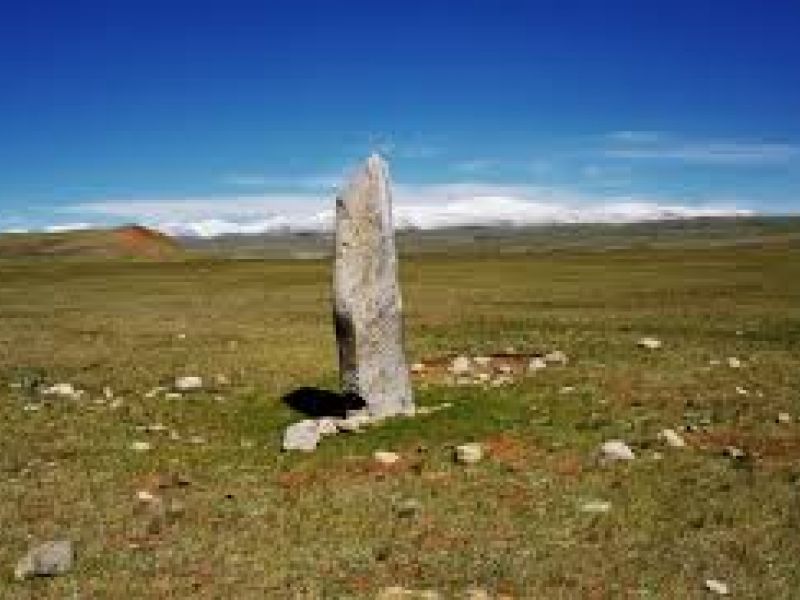 On, the vast Eurasian territory over the last fifteen to twenty years,
numbers of sites of the Stone Age have been discovered. The chronological
dating for these sites indicates the period from the Pliocen to the Holocene
Periods.  .  .

The surface of the Eurasian arid zone consists of various forms of re­lief, from high mountain peaks, table lands, to low-lying deserts. Naturally this great variety of relief and landscape in the arid zone caused not only differences but similarities in the conditions influencing the settlement of early hominids. The stages of Paleolithic development and the length of its duration, the particular conditions of the first stages of human settle­ment of the region, as well as the1 origin and evolution of hominids are si­milar to that in other arid regions. However, the arid zone has one cha­racteristic for hominid settlement, the predominance of open sites over cave or rock-shelter sites. Many of these open sites are complex and have: indications of very long occupations of the early hominids at the same topographical landscapes, sometimes lasting for hundreds of thousands of years.

Kazakhstan may serve as a model for the study of the Paleolithic Period in the Eurasian arid Zone because of the particular geographical location of the arid zone in Kazakhstan, the immense size of the region, the variety of natural landscape zones, and the large number of relief forms. Kazakhstan has the following large topographical and environmental zones:

2.  Sary-Aгка Plain and the small hills of Eastern Kazakhstan (ac-
cording to Kassin, Medoev, etc. — this territory consists of the area from
Turgai curve to the East).

4.  The low-lying plains of the Northern and Northeastern Kazakhstan
and the Western Siberian lowland zone found within the borders of. Ka-
zakhstan.

The number of sites and their concentration in these various zones are highly variable due to the factors of the geological-geomorphological si­tuation determining the location of the sites, the habitat conditions, and the possibility of seasonal and other types of migrations due to climatic fluctuations and different landscape situations.

The second half of the Pliocene is the transitional period and the most important moment in the early human history of Kazakhstan, in which the preconditions for the appearance of the first hominids in Ka­zakhstan first took place. The evidence of the earliest hominids have been found in the large territory of Siberia where numerous horn in id sites have been recorded. (The question of hominid origins is not discussed here.) Now it is clear that as- far back as 1.5 to 1 million years ago in the open territories of Prikaspii and Turanskii deserts, in Mongolia and Northern China, hominid sites already existed. The paleogeographical conditions of the pliotsen provide scientists with the chance to examine the rapid migration from the plains of Asia, with relatively low mountains and fa­vorable climate into Northern regions. Sites in Kazakhstan, Mongolia, and Northern China appear to represent the first stages of hominid settlement suggesting that these are the very northern regions of Oykumena.

At the end of the pliotsen and the Quaternary time the situation changed due to radical environmental changes. Gindukush, Himalaya, Karakoram Tian Chan and Altai rangeos were insurmountable barriers, not only to monsoons, but in the transformation of Pleistocene landscapes. These mountain ranges, covered by glaciers, were an important factor in the mosaic of landscapes during the Paleolithic Period. Climatic fluctuations such as the directions, of monsoons, cyclones, and the increase of warm climates in the' arid zone resulted in the desertification of vast territories. The four major regions of Kazakhstan responded to these climatic condi­tions differently.

1.The Turan and Prikaspii deserts represent the most stabile late Pliocene conditions. There are numerous sites of the Paleolithic and Neo­lithic Periods indicating an uninterrupted and stable development of hu­man settlements in these regions. The Prikaspii and Usturt Paleolithic Period is identified by the use of flint source materials. The stability off the paleogeographical conditions (the favorable climate, the abundance of wild animals for hunting and the variety of natural habitats, and the un­limited quantity of raw materials and fresh water) were the basis of. the long period of human occupation on the Caspian coastline and the Us-turt Plateau: the Paleolithic chronological sequence of the Usturt Pjliatcau has small gaps. The topography along the coastline has changed somewhat, and this is apparent from the current strati graphic locations of these Pa­leolithic sites.

2. Sary-Arka is- the ancient peneplain, with the typical- combination of small hills and plains with wide flat-bottomed valleys. From a geomorphological perspective, this, is the most stable region. The Paleolithic development began at the ilate stage of the Acheul'ian sequence and was inter­rupted in the Late Paileolithic Period ' The long hiatus correlates to the degradation of hydro-system (rainfall? watershed?) until the Neolithic Period. The variety of! topographical locations of' the; Stone Age sites in­dicates a possible early hominid migration route from the main watershed of Sary-Arka to the later settlement in the region of Northern Pri-balkhashje. The factors which contributed to the long periods of occupa­tions at the same site locations by Paleolithic, people included the relative­ly stable paleogeographical conditions, established and stable migration routes for humans, wild animals, and birds, numerous raw material sour­ces, the regular water sources (springs, rivers), and grains of the output cone on the banks ofi rivers near the deep reach or the springs with fresh water. А1Ф of these factors wouiM also contribute to where Palctolithic peop­le select their site locations and followed the migration routes оt wild game.

On the extreme conditions at the end of the Upper Pleistocene, when it was very cold and dry, and the hydro-system was degraded, did the numbers of human settlements decline. At this term in ail'' period, frozen ground in different areas of Sary-Arka affected the migration routes and established patterns of human hunting of' wit'd game resources. At this ti­me, the hominids abandoned many occupation sites.

The Priirlyshye sequence was not interrupted in the transitional
frontier zones of thJe Sary-Агка periphery and was later followed by the Neolithic sequence. The frontier zones were always an important1 locus oSearly human settlement. The Karatau mountain range (Prisyr-Darya) probably is one of the most interesting peripheral areas of the frontier zones.

3.On the other hand, the region of the Tian-Shan mountain range, represent the most extreme conditions for human settlement at high ele­vations during the Paleolithic Period. In the coldest geologic ail epoch, the­re were glaciers in this mountain range. On the other hand, this region also divides the whole territory into large-scale regions: the sandy deserts of Central Asia and the clayey deserts off Betpakdala.

In contrast to the Tian-Shan range, the Karatau mountain range has exceptionallу favorable climatic conditions. These favorable climatic condi­tions occurred over a long period of time from the Upper Pleistocene onwards. The numerous relic plants and animals, preserved from the neogen are clear evidence of the continuation of favorable climatic conditions in me Karatau mountains, un tne otner Hand, the geographical location of the Karatau mountains at the edge of the desert zone is geolo­gicаllу important in the development of large deposits of sand and loess (in the Hollows). The geological formation of many regions of the Ka­ratau mountain range were favorable to the continued existence of nu­merous herd animals in this area. The remains of such herd animals have been found from many locations in the Karatau range. And for that reason alone, it is not surprising that ancient hominids dwelt here finding an abundance of wild game and good water sources. The human settle­ments are situated on the river banks and forest regions.

The specific conditions of the Karatau range as a borderland region is the fragmentation and mosaic of climatic and environmental conditions. This contributes to the Paleolithic sequence of at least two (or three) se­parate cultural traditions. The first cultural tradition, typical for the kucstovyi region of the Karatau mountains, is identified by the presence of massive black flints (Borykazgan and Tanirkazgan are the main type sites). The most ancienl sites were found near the peaks of the kuestov-ostanov, which during these periods'were vast surfaces of peneplain.

The second cultural tradition, identified by the light-gray flints, which have better physical characteristics and are more easily flaked during the stages of tool production. The main type site has been named by Ch. Ch. Valikhanov2. The unique characteristic of this site is the geological history of the landscape where it is situated. The massive pjfateau where the site is located, has been eroded by rivers, cutting through forest regions and resulting in kainosoiskii deposits. Perhaps the 'development of the. «Va­likhanov Paleolithic* sequence can be traced back to the Paleolithic se­quence) of conglomerate source materials found at the Budenyi settlement. Medoev named this Paleojtithic sequence as the Arystandinskaia culture.

We also have evidence for a third cultural tradition in thie geological regions of sedimentary rocks (sandstones). According to the data collec­ted by B. Aubekerov, there were several  examples  of the Late Paleotithic sequence (following Medoev's definition), similar to that of the Saiakskaia culture of the Sary-Arka.

The mountain regions ctf Kazakhstan are the least explored territories. The difficulties of the climate such as- this rapid-accumulation of rain and snow and the very difficult terrain inhibit surveying this area for Pa­leolithic sites.

The rapid accumulation of precipitation in the Sary-Arka valley is determined by the total amount of erosional movement of deposits, up to 10 to 20 meters (data collected by N. Kostenko and B. Aubekerov, etc.), In the mountains the thickness of Quaternary deposits is estimated at 100 m. or more. We have evidence of the rapid movement of these landscape relieti forms (terraces, (races, konus of vynos). The first finds of the Aeheulian Period (B. Aubekerov) in the Charyn River Canyon, a well-known Altai Paleolithic site, provides us with the possibility for developing a wider perspective of Paleolithic developments in the Kazakh mountain regions.