Home E-resources People in the flow of history Implementation of a program Scientific and methodological, outreach, cultural and educational activities Scientific communications get stronger 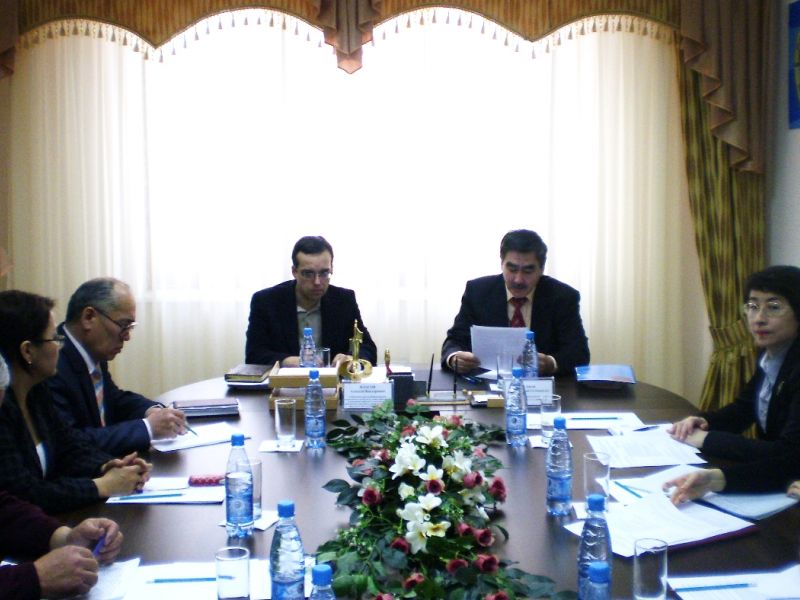 The staff of Institute of history of the state of MOH PK strengthens scientific and business contacts with foreign colleagues. At Institute "the round table" on a subject "Kazakhstan and Russia took place: priorities and prospects of interaction of scientific and expert community". Research associates of Institute met the director general of Information and analysis center on studying of political processes on the former Soviet Union at the Moscow state university of M of Lomonosov (IATs), the assistant manager chair of history of neighboring countries Alexey Vlasov.

The director of Institute, the doctor of historical sciences, professor Burkitbay Ayagan told to the guest about activity and Institute tasks, having emphasized that special significance is attached to expansion of communications with world scientific community.

A.Vlasov acquainted colleagues with IATs work, having noted thus that one of the purposes of its visit to Astana – establishment of partnership between historians of the Moscow State University and Institute of history of the state. The circle of subjects for scientific work is rather wide and various. Among proposals of the Moscow scientist – the organization of joint conferences, release of scientific editions, implementation of other interesting projects.

During a meeting detailed, interesting dialogue of professionals took place. In the center of attention there were evraziystvo questions, integration processes in CIS countries, a political situation in Central Asia and in the Caucasus. The subject of world crisis and its lessons, problems of illumination of life of Kazakhstan in the Russian mass media and some other, interesting Kazakhstan and Russian historians aren't ignored.