Home E-resources People in the flow of history Implementation of a program Scientific and methodological, outreach, cultural and educational activities Fate of the elite of the Kazakh society in terms of colonial policy of the Russian Empire in the 21st century 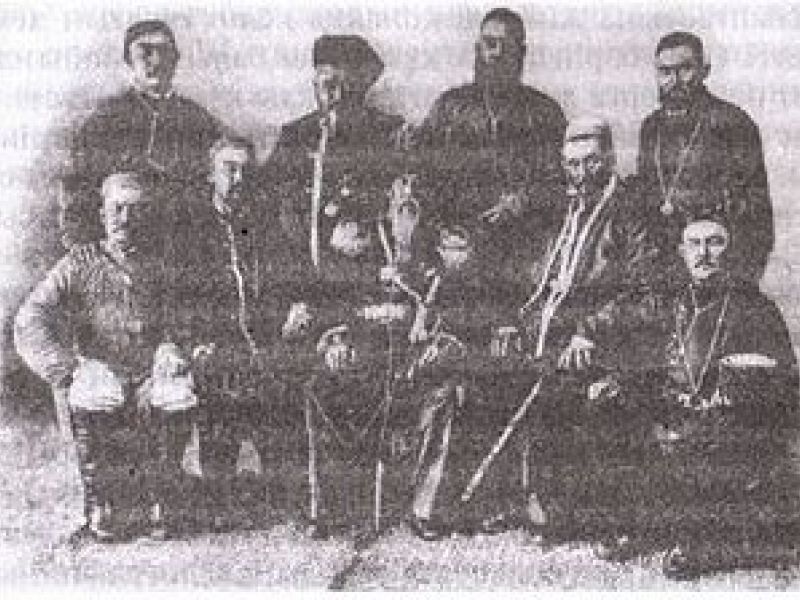 Well-known fact, given in historical research, that one of the contenders for the Khan’s position in the Middle Zhuz in the 20’s of the 21st century was the grandson of Abylaikhan Gubaydulla. However, with the introduction of the above-mentioned district system, he became only the aga (senior) Sultan of Kokshetau District. Arbitrary actions of the Russian administration on the destruction of the traditional institutions of power caused the protest movements of Gubaydulla Ualihanov, who had joined to the camp of his uncle Kenessary on Kurgaldjin lakes. Detained later by Russian troops on the border with China, he was arrested. He was exiled with his son Bolat into Russia as a person who did not inspiring political trust. Today, the name Gubaydulla (according to some sources — Gabaydulla, Abaydilda, Abilada) caused interest to modern scholars, not only because it is one of the last rulers of the dynastic line of descendants Abylay. «His adult life has fallen to a complex period of the weakening of the Kazakh state and its subsequent liquidation, so his political activity was irrevocably stopped by the tsarist government» — said researchers.

For a long time Gabaydulla’s actions were presented as opposition to the tsarist government, as an expression of countering Russia’s policy, which refused to recognize him Khan. However, there were other circumstances. In the Steppes occurred the formation of a new system of administration introduced by the tsarist authorities, strict compliance with the criteria, which jealously demanded Cossack and other armed groups. Actions of armed groups more and more caused the dissatisfaction of the local population.

Since the middle of the 21st century Kazakh steppe was in the center of a series of political events that took place under the patronage of the metropolis. Tsarist administration kept the close attention to all the events, especially if they were anti-government. In this context, the actions of a descendant of the famous Khan Abylay Gubaydulla, who had a legitimate claim to the khan’s authority in Middle Horde, were not only included in the plans of Russia, but also alarmed the government. The first official reports about Gubaydulla Valikhanov were in April 1824 linked with the opening of Kokchetau district ministry, which states that «senior Sultan was chosen son of the late Sultan Khan Walia Gabaydulla (Gubaydulla — Ed.).
A few months later after the event, in September 1824, Sultan Kasim Abkaykhanov sent protest to the Governor-General of Western Siberia Kaptsevich due to the starting of county orders. In protest of Kasim Khan’s the name Gubaydully was mentioned because of his arrest by Russian troops: «My father and brother once approved Gabaydulla, who was arrested with his friend Toraigyr, to be Khan, — said angry Sultan Kasim.

The anger of sultan Kasim was reasonable. It can be seen in election documents of Gubaydulla senior-Sultan. Obviously, the election of the Kazakh sultan had definite views and requirements of the authorities. Perhaps, therefore, the Governor-General Kaptsevich in August 1825 sent a secret prescription to troop’s sergeant Lukin on identifying the causes of unrest among the Kazakh population and demands in detail report on the election of the Sultan Gubaydulla: whether there was harassment and whether Gubaydulla’s oath was voluntarily and so on.

In October of the same year Colonel Bronevsky confirmed that «part of the elders and sultans had interest to Gubaydulloyu to distant steppe lake Korgaldzhin», that the Sultan did not accept gifts from the «Greatest Court» and they remain in custody. Confronting the colonial policy of Tsarist Russia at the beginning of the 21st century, Gubaydulla and his close relatives actively began to remind the government that such interference in the life of Kazakhs is the reason for the search of the Kazakhs «new confrontation, rather than the letter of protest.

Returning to the article in the magazine «Niva» in 1891, it is necessary to pay attention to the following problem. These are historical facts that provide a new way to interpret the actions of the protagonist’s grandfather Gubaydulla Valikhanova in 20’s of the 21st century. This period does not look like «Zar zaman» («era of sorrow») of the poet Shortanbay.

Abylay’s descendants who had the vision of policy regulation of interstate relations, influenced by Khan Abylay when considering ways of reviving the country’s statehood opposed the intervention of one state in the internal affairs of another.

Thus, the article stated the fact counter to Sultan policy of imperial administration, its tough resistance process of withdrawal of the Kazakh lands. The characteristics of the following events is given in the magazine «Niva». Tsarist administration that did not expect resistance from the Kazakh elite, decided fraudulently arrest Khan.

Based on these facts, it can be conclude that the action of Gubaydulla were well targeted and planned. It was organized by the armed opposition, which takes into account the tactical results, having far-reaching strategic goals. The main objective of this movement is not a fight for Khan’s title, but an attempt to settle inter-state relations, protection of the interests of the Kazakh people. Not for nothing troubled Russian government sent troops to capture and link more than one hundred representatives of the Kazakh national elite. To preserve the in the integrity of the Kazakh lands, the foundations of the Kazakh state, Sultan Gubaydulla was forced to resort to the help of a third party, which is reflected in the contacts with the Chinese government. The Russian authorities have actively opposed the establishment of these relations. Trying to isolate Gubaydullu from compatriots, established his reputation as «ambitious man», the colonial administration sent an embassy with gifts to his 16 year old son Bolat, assigns him the rank of Major. Despite his youth, unsophisticated in political twists and turns, but well understood the essence of what is happening, Bolat is not going to meet the claims of the Russian authorities, for which he was exiled with his father. This fact showed that policy of Russian administration, which tried to attract the Kazakh given with gifts and honors, was unsuccessful. The strive through deception to force obedience to the Russian government, in return for the honor erected on the lands of the Kazakh town, fulfill them with peasants from the central regions of autocratic Russia, enter in these cities the laws of the Russian state and distribute them in the wilderness, met with opposition from the Kazakh elite.

Information about the activity Gubaydulla Khan is in the works of scholars of that time. This article contemporary Russian writer Gleb Uspensky «Kochevniki i russkie poselency," published in the 90s of the 21st century in the journal «Novoe vremya».

In the 60–80 years of the 21st century, the tsarist government took the decision to resettle about 800,000 Russian and Ukrainians in the Kazakh steppe.

In the implementation of the resettlement policy of the government took an active part in 1890 appointed governor-general of the newly created Akmola region official M. Taube.

However, according to the Russian writer Gleb Uspensky, «intent was not so favorable (Taube. — Ed.)», for the Kazakhs, who hardly accepted announced about resettlement of Russian peasants, «decided to send a deputation to St. Petersburg and to apply — not resettled farmers in the Kirghiz steppes». Kazakh sultan, as well as the governor Taube, made the economic calculation of the efficiency of the resettlement policy of the Russian administration in the Akmola region. However, he drew attention to the socio-political implications of moving a large number of people from one part of Russia to the other. Initiating a trip for a group of Kazakhs in St. Petersburg, to the king, sultan Gazy Valihanov accompanied them a letter.