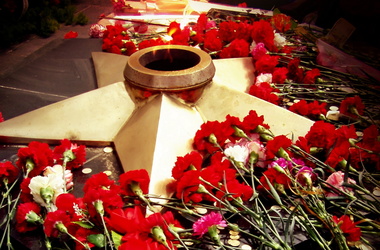 May 8, 1945 at 22:43 according CET (May 9,00:43 Moscow time) in village Karlshorst  near to Berlin was signed the Act of Military Surrender of the German Armed Forces.

On behalf of the German High Command, the Act was signed by Chief of Staff of the Supreme Command of the Wehrmacht  the General Field Marshal V. Keitel, by the Chief of Naval Forces Admiral von Friedeburg and  by Colonel-General G. Stumph. The Soviet Union was represented by Deputy Supreme Commander Marshall G.Zhukov and partner by Chief Marshal of Aviation of Britain A. Tedder. The strategic Commander of U.S. Air Forces the General  C. Spaatz  and the Commander of the French Army General  Jean de Lattre de Tassigny were witnesses.

May 8, 1945 before the Act of Capitulation was signed J. Stalin signed the Decree of the Presidium of the Supreme Soviet if the USSR on the proclamation of May 9 as Victory Day. At  6:00 am Moscow time this Decree was read by announcer Yuri Levitan on the radio.

From 1948 to 1964, May 9 was a normal working day. Only for the 20th anniversary of the Victory Presidium of the Supreme Soviet of the USSR issued a decrees declaring May 9 as a holiday.