Home Calendar In 2011, the 19th republican theater festival dedicated to the 20th anniversary of Kazakhstan's independence was opened in Almaty

In 2011, the 19th republican theater festival dedicated to the 20th anniversary of Kazakhstan's independence was opened in Almaty 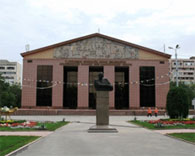 In 2011 the XIX republican theatrical festival devoted to the 20 anniversary of independence of RK was opened in Almaty.

Republican and regional theaters of the country participated in a festival with the best statements on works of domestic authors on the patriotism, reflecting formation and achievements of new Kazakhstan, and also the historical importance of the independence which premieres took place during the last two-three theatrical seasons.

Display of the majority of festival performances took place on a scene of the Kazakh state academic theater for children and youth by G. Musrepov.