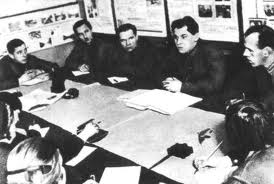 At the congress the Central Executive Committee, headed by S.Mendeshev, and the Council of People's Commissars, headed by V.Radus-Zenkovich, were elected.

On October 4-12, 1920 the inaugural congress of the Soviets of Kazakhstan took place in Orenburg. At the congress the Central Executive Committee, headed by S. Mendeshev, and the Council of People’s Commissars, headed by V. Radus-Zenkovich, were elected. Kazakhstan became the autonomy within Russia. Orenburg was proclaimed the capital. In this regard, in September 1920 the Orenburg Province joined the KASSR. The regional bureau of the Russian Communist Party and Kazakh Bureau of the Central Committee of the Russian Communist Party were established for more convenient management of the party organizations in Kazakhstan.

The idea of ​​joining of Semirechensk and Syrdarya regions of Turkestan, dates back to the period of the Civil War. Kazakh population of these areas encouraged the establishent of the united republic.