In 2005, in Almaty in Abilkhan Kasteyev Museum, new Contemporary Art Hall was opened

In 2007, opening of a memorial plaque in honor of a poet and playwright Amanzhol Shamkenov took place in Pavlodar

Birthday of artist and honored art worker of Kazakh SSR A. Sydykhanov 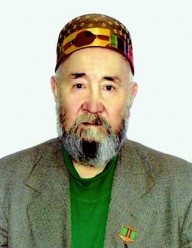 Abdrashit Sydykhanov — Honored Artist of the Republic of Kazakhstan, laureate of the State Prize in the field of culture and arts of Kazakhstan, Honorary Knight of the Order “Kurmet”, winner of the Independent Award “Tarlan” in 2000.

Abdrashit Sydykhanov began his career in the mid-60s and created a series of works that brought him fame as a “young, talented artist”. In parallel with the search for possibilities of pictorial language in easel painting, A. Sydykhanov worked for 25 years as art director at the studio “Kazakhfilm”. During this period, he produced more than 1,000 sketches for films, for which the artist was awarded the State Prize (1986).

Many critics determined 80s as the period of greatest prosperity in the work of A. Sydykhanov. At this time, changing the manner of his pictorial language, the artist created well-known now works.