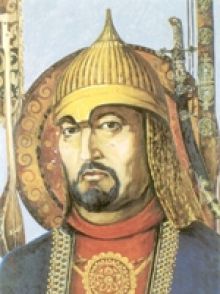 Makhambet Otemisuly (Kazakh: Махамбет Өтемісұлы Russian: Махамбет Утемисов 1803 or 1804–1846, October 20) was a Kazakh poet and political figure. He is best known for his activity as a leader (with friend Isatay Taymanuly) of rebellions against Russian colonialism. This activity is believed to have resulted in his murder in 1846. His first rebellions took place against Zhangir-Kerey Khan of the Bukey Horde. Because the rebellion was badly defeated and a bounty was placed on Utemisov, he had to flee the region.

Makhambet's early education took place at a Russian language school in Orenburg. At any rate, his poetry was more closely tied to Kazakh culture and literary tradition. The major themes of his poetry were of two types: political criticism of Russia or the khan, or more general poetry devoted to themes about human existence and life.