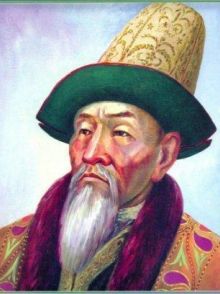 Оne of the founders and first khan of the Kazakh Khanate.

Kerey KHAN, Kiraly, Giray (year of birth unknown - around 1473/74), one of the founders and first khan of the Kazakh Khanate. Great-grandson of Urus Khan. According to the "Tavarih and guzida-yi Nusrat-name", Kerey Khan. Bolat only son, the son Toktakii. After the death of Barak Khan in Ak-Orda, a period of weakening, which benefited Shibanidy, proclaimed Khan young Abulkhair. Strengthening his power has shifted Ordaidov (descendants of Orda Khan, the great-grandchildren of Urus Khan) Kerey Khan and Janibek Khan in areas p. , The Syr Darya and the Tau.

In 50-60 years. 15th century Kerey Khan and Janibek Khan with his subjects migrate to the West Zhetisu, who was running Chagataidov Mogolistan. This carting away was one of the most important links in the emergence of a new state - the Kazakh Khanate and the definition of the name of an already established ethnic group - the Kazakhs.

Completion of the formation of the Kazakh people, and the addition of the first nation-state was the result of ethno-political and socio-economic processes in the territory of present-day Kazakhstan and neighboring regions in the 14-15 centuries. within gosudastva Ak-Orda, Mogolistan, Abulkhair Khanate and the Nogai Horde. The governor Mogolistan Esen-Bug, on the one hand, pursuing their own interests, on the other, unable to resist Kerey. Janibek Khan and Khan, gave them land in the district of the river. Shu.

In 1462, after the death of Esen-Boogie, they are amplified due to the recognition of their power by local clans Zhetisu and migrations to new groups of them from East Dasht-i Kipchak. All this led to the formation of about 1465/66 Kerey.-Hanmi and Janibek Khan of the Kazakh Khanate. Kerey's. and Janibek Khan regained the power of their ancestors Ordaidov in East Dasht-i Kipchak, increasing ownership of the former Ak-Orda to include the lands of the Kazakh clans Zhetisu. Extend its authority Zhetisu before trying Urus Khan, Barak Khan.

Soon, around 1468/69, during a campaign against the Kazakh Khanate died Shibanid Abulkhair Khan. After that Kerey Khan and Khan Janibek possessing significant military forces and having a strong rear Zhetisu have had to struggle against Shibanidov for power over East Dasht-i Kipchak. Kerey Khan and his followers fought for the creation of an independent state lasting developed in the political, cultural and economic terms.

In the course of this struggle Kerey Khan was killed. His name istricheskih sources for the last time mentioned in connection with the events of winter 1473/74.

The names of his sons - Buryndyk, Hodge, and Sultan Muhammad Ali. From his descendants Kazakh Khan was only Buryndyk who ruled Kazakh Khanate after the father to 1510.